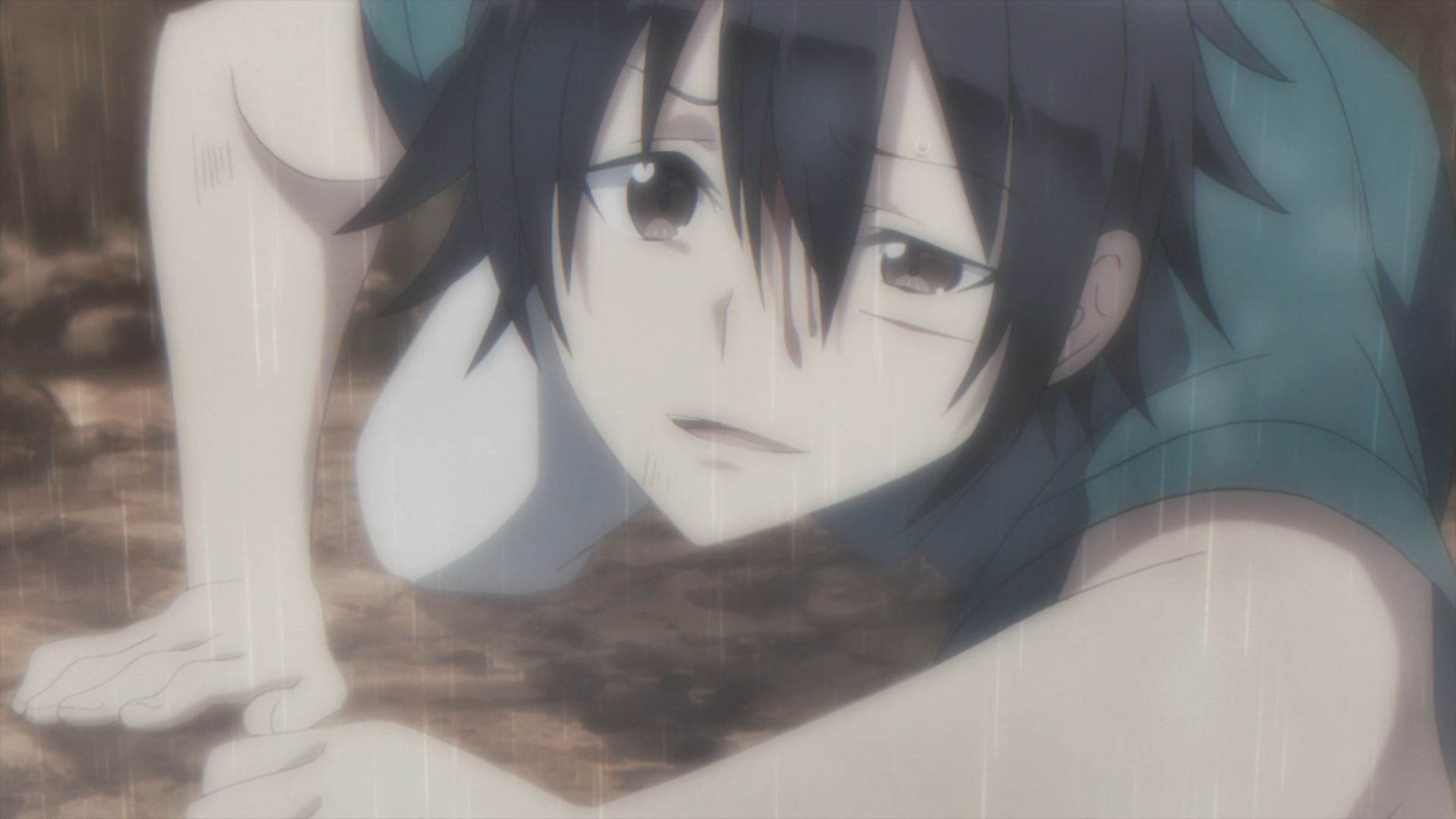 I’ll admit that on paper, Death March‘s premise sounds like a neat spin on the isekai genre. There is potential to having your protagonist whisked into a buggy, unfinished RPG that he himself was in the middle of programming. What stuns me, however, is how boring this set-up turned out to be. I frankly would’ve preferred if this show was more on the lighthearted side because being trapped in a glitchy world ought to be funny. Instead, it plays things dead serious and as a result, the experience is downright dry.

It also doesn’t help that the main character, Saitou, is yet another boring isekai protagonist and this premiere solely centers on him for a whole half-hour. I suppose it’s necessary for him to understand the world but I was so tired that I honestly was thinking along the lines of, “Just show me his harem options already”. Also, am the I only one who’s irked by how Saitou got isekai’d? The more I think about it, the more I realize having Saitou die from overworking is messed up considering that it’s a very serious and real issue in Japan.

And one last thing, Death March looks pretty ugly. The character designs are fine for the most part but some of the CG modeling is rough to look at and the world looks so generic (a big crime for an isekai show). I think I’ll pass on this. 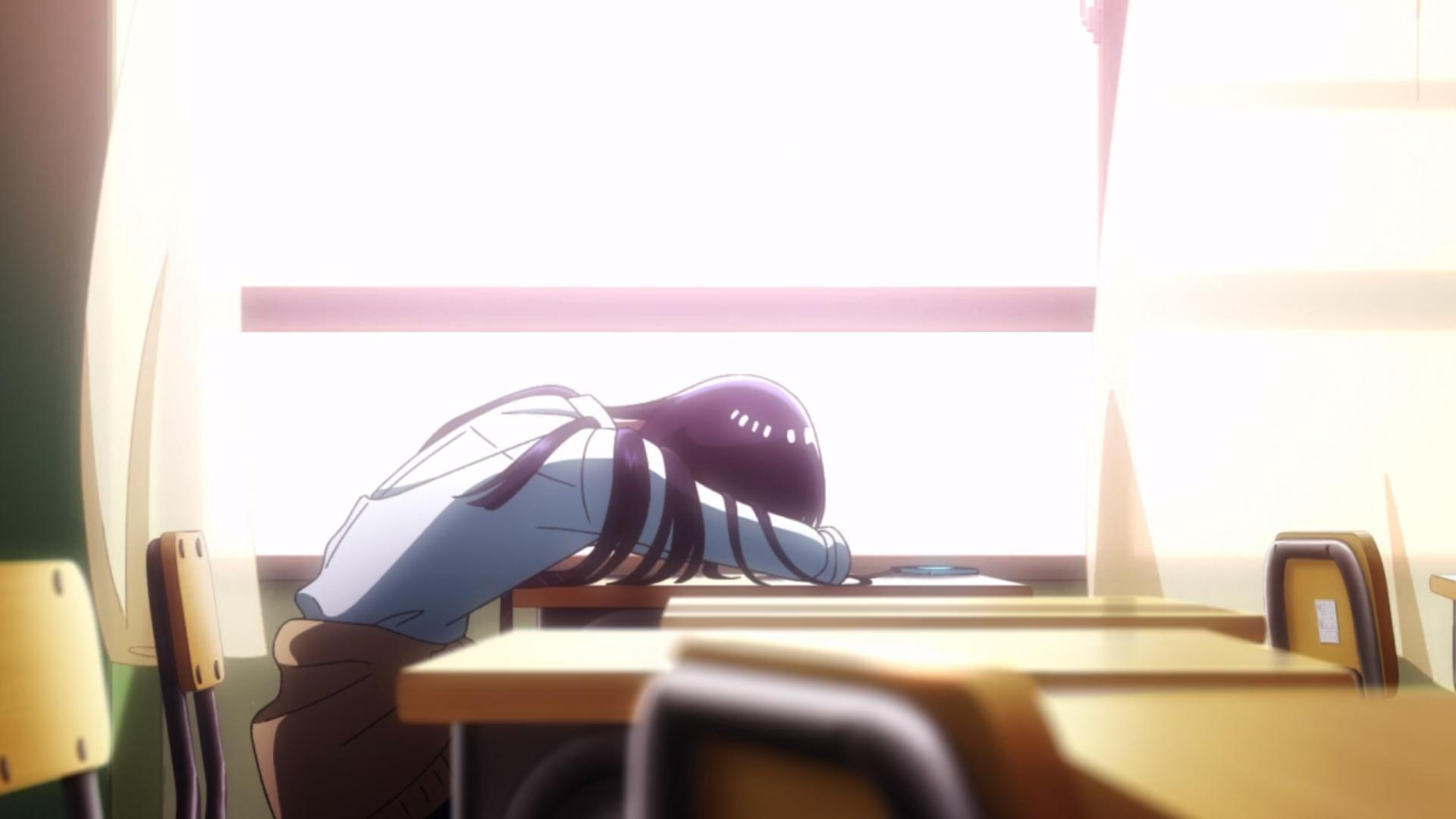 For once, Noitamina is fulfilling their original goal and giving a show that looks promising at the same time!

I was interested and but also wary towards After the Rain for a simple reason. The premise of a teenage girl falling in love with a 45 year old man has my attention but there is so many ways in which it could lead into uncomfortable and scummy territory. So imagine my surprise at how enjoyable this premiere turned out to be.

To begin with, this show looks gorgeous. Between this and The Ancient Magus’ Bride, I think WIT Studio is becoming a prominent studio people should keep an eye on. The lighting and weather effects looks fantastic and I’m liking the very shoujo look on the character designs (though I believe the manga is actually seinen). On top of that, I like how a lot of what Akira is thinking and feeling is conveyed through the visuals. Not once does she explicitly admit her feelings towards Kondo. Instead, it’s expressed through her body language which fits with how socially reserved she is and it’s also more powerful than an inner monologue or speech. Even the locales are designed to match Akira’s mood as she looks alone in this giant high school campus while feeling more comfortable and invested when working at the restaurant.

Perhaps the biggest factor to After the Rain‘s path to success is Kondo’s character. Whether or not this ship should sail remains to be seen but I’ll give the show credit in making Kondo as likable as possible. He’s definitely a pushover and a dork but that kind of personality makes it easy to see why someone as quiet and reserved as Akira would have a crush on. And while Kondo seems to pick up the signs, he seems quite aware that he’s very old for Akira. He does imagine himself as a teenager with Akira but that moment feels more like a man reminiscing on youth than imagining an incredibly creepy scenario.

Of course it remains to be seen what will happen when the relationship escalates but so long as this show is as careful as it’s been with this set-up, I think this is potentially something worthwhile.

Death March to the Parallel World Rhapsody is officially available on Crunchyroll & Funimation.

After the Rain is officially available on Amazon.