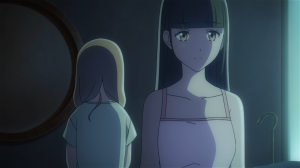 You know, when this show called Antarctica “a place further than the universe”, it really wasn’t kidding.

I joke but it is a little astounding that there we’re about halfway through the show and these characters still have yet to get to the South Pole. No doubt, Ishizuka and her team are asking a lot of patience and trust from their audience with this pacing. That’s hardly a point against them though. With the journey being this fun, I can’t wait to see the destination and each new episode just makes me love these characters more anyway.

For the most part, I expected a lot of silly antics in this episode. After all, Yorimoi is partly a CGDCT show and there’s always potential for comedy with a travel scenario. Sure enough, you do see these girls enjoying their little detour as much as possible. Even the plane ride to Singapore was funny as you see the girls alternate between getting some sleep to goofing off with the in-flight entertainment. I’m surprised they’re even allowed to make that much noise. You’d think some extra would complain about it. And at Singapore itself, there’s some solid entertainment to be had with seeing these girls enjoy a new culture and environment. They dump money on souvenirs, admire the sights, take pictures, and try out the local delicacies (mmmm, durian). It’s all the kind of stuff you’d expect to see in a travel episode but thanks to the girls’ chemistry, it’s a lot of fun watching these scenes play out.

To my surprise, things do get dramatic as Hinata loses her passport and puts a potential roadblock on the journey. It’s a simple obstacle but be honest, there is something nightmarish with the idea of losing your passport in a foreign country. Understandably, Shirase is really concerned about making it to Fremantle in time. She’s so close to achieving her dream and it would indeed suck if it came to a halt this far in. However, when Hinata offers to stay behind, Shirase actually objects to the proposal.

It was mentioned in the past that Hinata originally didn’t like being part of a group and this episode further explores why someone that sociable would feel that way. Simply put, Hinata’s afraid of being a weak link in the group. The last thing she wants is to be a nuisance to her friends and hold everyone back. And knowing Shirase’s own resolve to get to Antarctica, I think Hinata sees her compromise as a small price to pay. It would make more sense to let the ones who care most about the objective to go on ahead. And while I would certainly hate to see Hinata left behind, I completely understand that she’d rather take the brunt of her mistake alone.

But while Shirase may be very passionate about her dream, she’s not selfish enough ditch Hinata. I get the sense that she’s realized that the dream is not hers alone anymore, it’s everyone’s. Mari originally joined to help Shirase but later realized her own individual desire to travel in Episode 4. Yuzuki certainly wouldn’t have gone had she not have the friends to go along with her. Everyone is passionate about Antarctica for their own reasons so. To Shirase, it just doesn’t seem fair or reasonable to leave Hinata behind. The fact that she pulls out her one million yen to purchase new flight tickets speaks to how serious she is about that. Hinata may fear of being the weak link but Shirase doesn’t care; she just wants to see Antarctica with all her friends.

Granted, you do find out that Shirase had Hinata’s passport this whole time but I don’t really see that detail as a cop out. I’d argue that the girls’ dedication to one another was still tested in this episode and their actions still speak volumes about their personalities, even if the whole drama was a bit in vain. Besides, this whole passport debacle was still worth it thanks to Mari and Yuzuki’s response to it. Just the Jaws-esque music that plays when Shirase gets caught red-handed was gold. And while I’m not a durian connoisseur, I can imagine that it’s probably cruel to subject Shirase and Hinata to the taste of durian flavored ice cream. What a punishment. Overall, I’d call it a win-win scenario. Everyone can make it to Fremantle in time and has grown closer as a group and the viewer gets to enjoy it all play out in dramatic and comedic fashion.

Watch A Place Further than the Universe on Crunchyroll.

Read My A Place Further than the Universe Reviews

4 thoughts on “A Place Further than the Universe – Ep. 6”