An update on my Anime Boston experience though I must admit that this post is just full of random stuff.

Anyway, I spent slightly less time at the con today. I didn’t need to grab autograph tickets so I slept in a little bit more and I went home earlier so that I can eat dinner when you’re supposed to eat dinner.

Some Stuff I Bought

Day 2 was pretty much just me shopping. It’s not a huge haul mind you; I was on a small spending budget this con but I’m really happy with what I did get and there was some neat free stuff as well. The only things I haven’t taken pictures of is the free bag Crunchyroll gives out to Premium Members at the con (mine’s Yuri on Ice themed) and a Riko Sakurauchi figure I bought (haven’t opened the box yet). 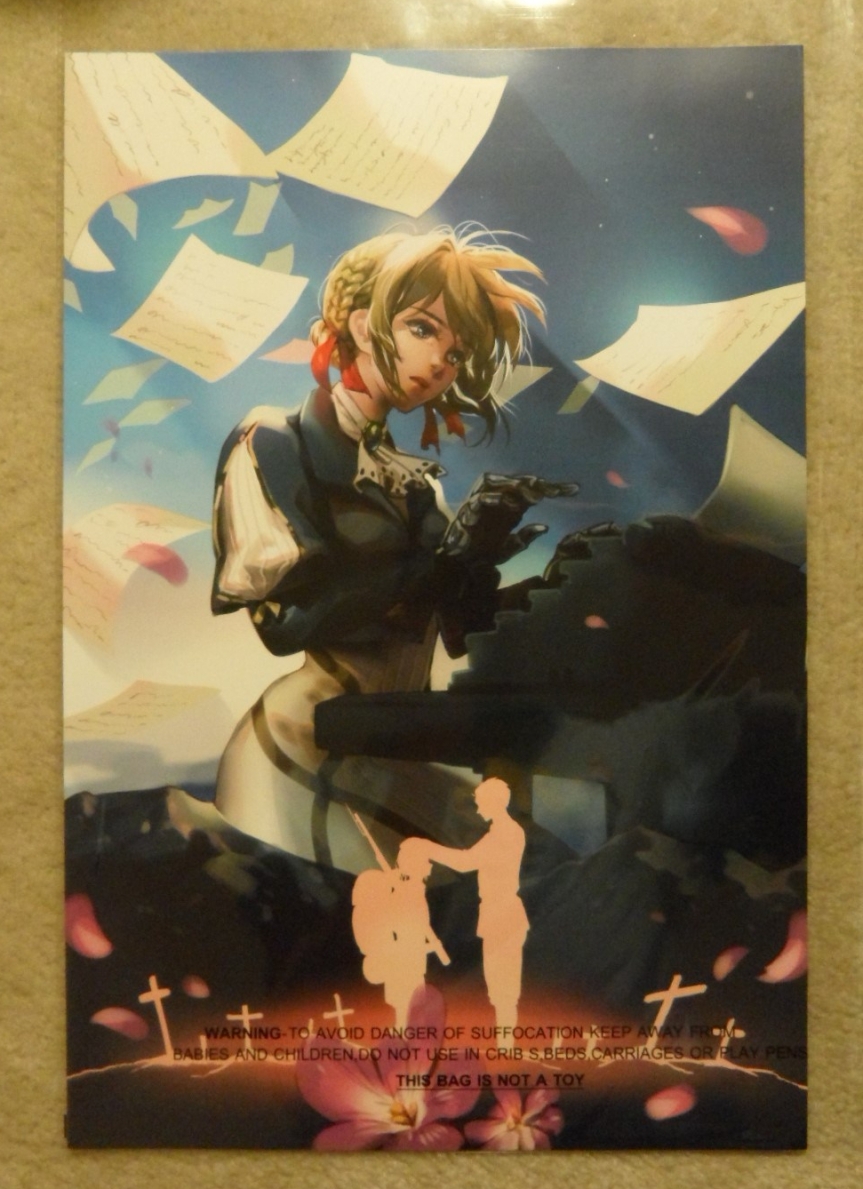 A Violet Evergarden print by ofskysociety. I really love the art style and how it includes Violet’s past and present. 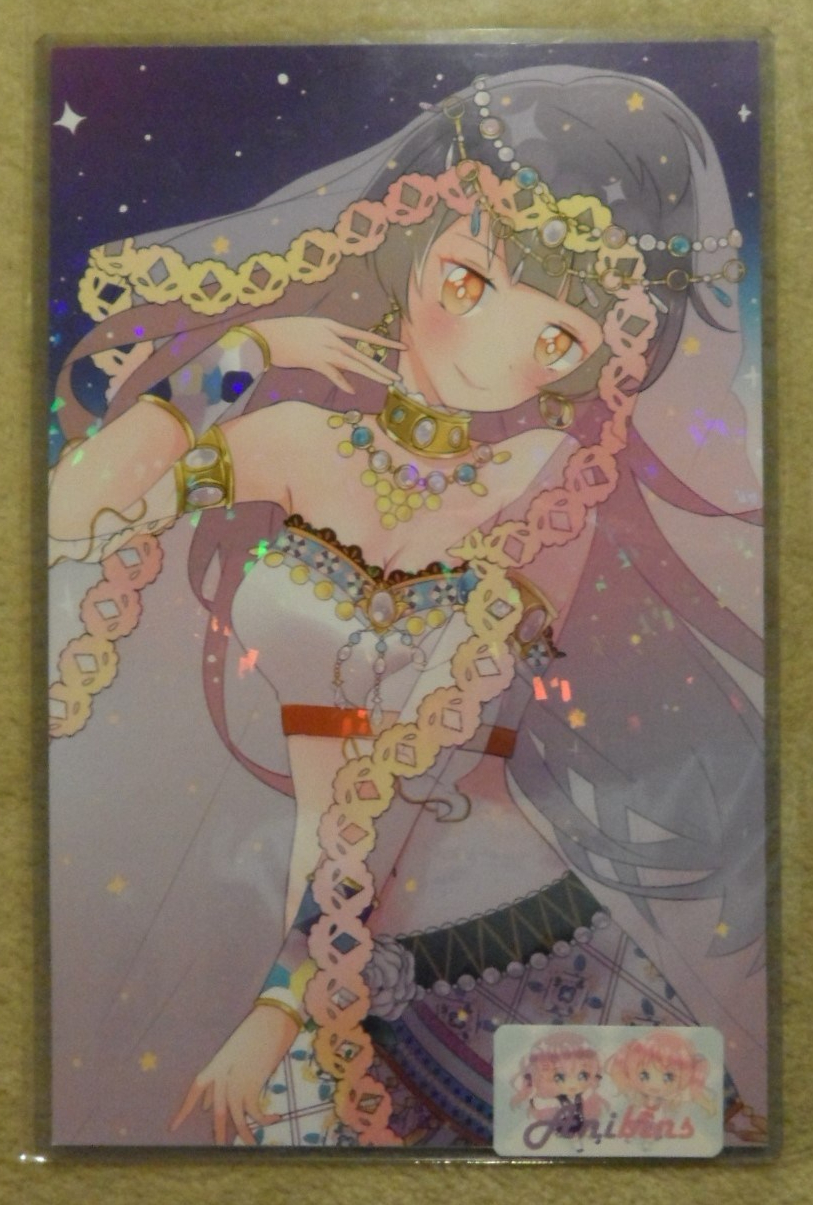 A holo print of Kotori Minami from Love Live! School Idol Project by AniBins. Kotori is one of my favorite Love Live! characters and much to my embarrassment, any art or merch of her tempts me like crazy. 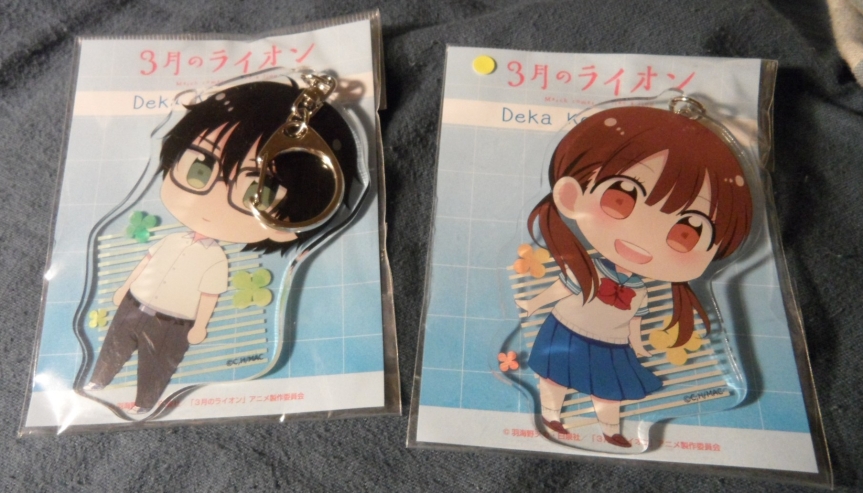 Rei and Hina keychains for 3-gatsu no Lion. I’m not kidding, these were the only merchandise for 3-gatsu that I saw at the Dealer’s Alley. There’s no artwork at the Artist’s Alley either. This show deserves way more but I’ll take what I can get.

Some Love for Princess Principal

Because I absolutely refuse to stop talking about this show. 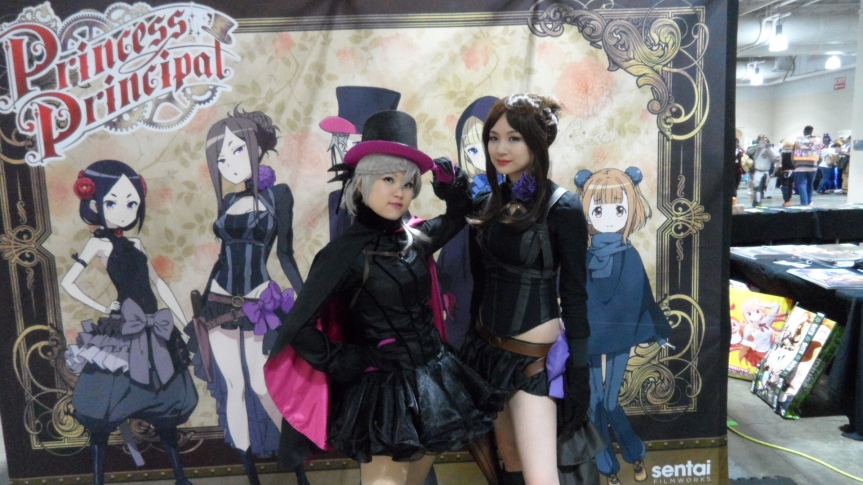 Sadly saw no Princess Principal cosplayers apart from the two hired at Sentai Filmworks’ booth; a shame cause the costumes look so darn cool. Oh well, at least Sentai Filmworks remembers the show. I was really happy to see them promoting it. Ange and Dorothy are in the picture but there were also Princess and Beatrice. No Chise though… 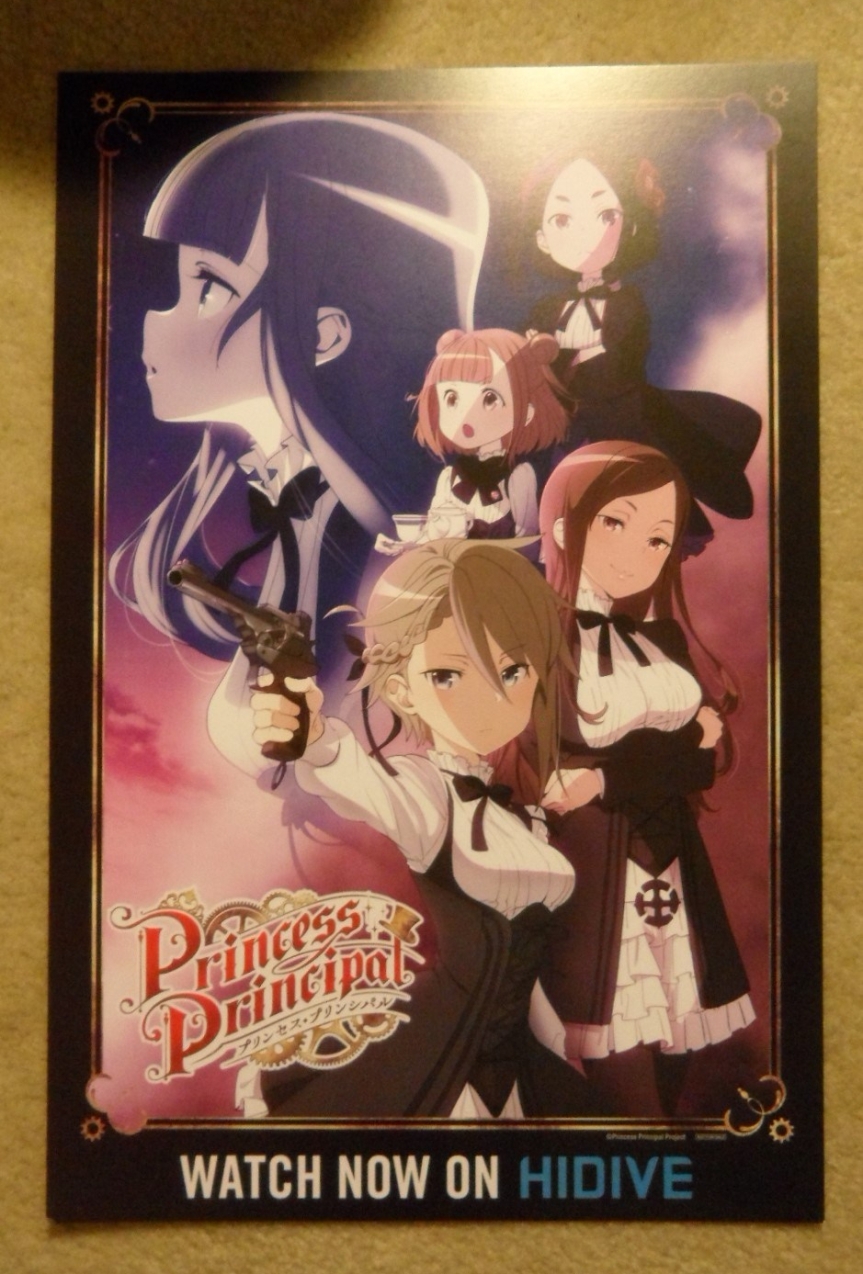 There was some Princess Principal merchandise and both Sentai Filmworks and Hidive were giving out this free poster here. No word on a home video release though. Hmmm…..

A fun, silly thing Funimation was doing at their booth to promote the home video release of Re:Zero. 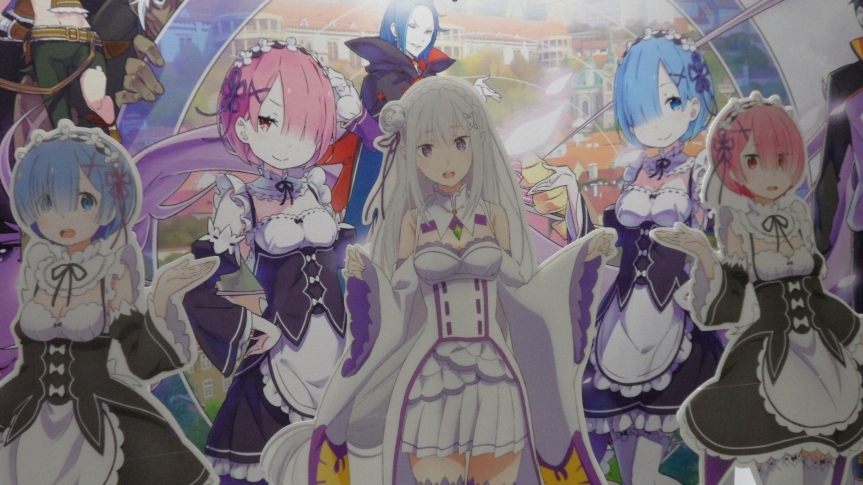 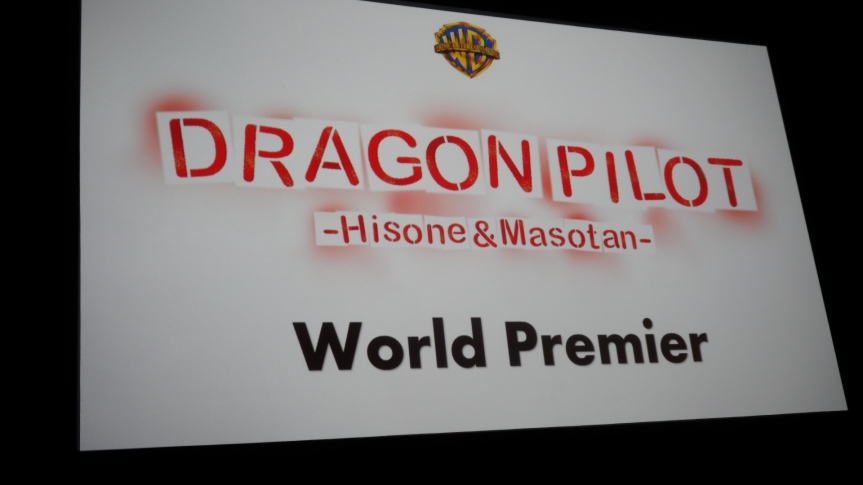 I wanted to go to this and the Boku no Hero Academia Season 3 premiere in between shopping. Sadly, the line for Boku no Hero was too insane for my liking but I at least got to see Bones’s other upcoming anime.

I’ll make an actual First Impressions post when the show actually premieres but I will say that I did enjoy what I saw of the show so far. It’s a pretty weird anime for sure. I knew going in that it’s about the Japanese Air Force training dragons though I didn’t expect the dragons to actually eat their pilots so that they can be piloted. Even more surreal is that the armor on the dragons do transform and turn them into faux aircraft. Everybody in the panel room lost it at that scene.

The writing is maybe where I have the most concern right now. Mari Okada is a capable screenwriter but she has had her fair share of missteps as much as successes. Something about the dialogue in this premiere seemed too blunt and expository to me, especially when it came to characterization. It is, however, a little justified with the main character since she has a habit of saying what’s exactly on her mind.

Time will tell how the scripts fare but in the meantime, I’m not worried about the visual department. Bones is one of the best studios out there and Hisone to Maso-tan is pretty pleasing to look at. There’s some vibrant movements drawn here and there’s a nice visual balance between making the dragons look cute and making them look like impressive feats of nature.

I don’t know if this has completely sold me just yet but I did enjoy this episode a fair amount so this show has a chance at being a mainstay for Spring 2018.

Perhaps the most fortunate moment for me so far. As I mentioned earlier, I went to meet Christopher Bevins and Rachel Robinson yesterday and I originally didn’t have anything for Bevins to sign apart from my convention. I thought to myself, “Man, it would’ve been great to get a copy of Princess Jellyfish signed”. I really love that show and Bevins was the ADR director for the English dub (a dub that I thought was a quite good). It sucked at the time that I didn’t find out about this until the last minute (like right when I’m at the autograph line).

Coincidentally, I spotted a DVD copy of the show at Funimation’s booth the next day and I ran into Bevins again at the Dealer’s Alley so I was able to get the DVD signed (Grelle also signed it as well; he plays Kurako). It’s usually better to have autograph materials ready but boy was I happy that it all worked out that one time!

Properties I Spotted in Cosplay: