I unfortunately couldn’t stay at AB for too long today. Tomorrow is my return to the dark and cruel world that is my final semester in college so I need to spend some time preparing for the worst. I did a few things though.

I wanted to get a ticket for ASAKA’s autograph session so like Friday, I woke up super early (like 5:30) so that I can board the train and make it to the con in time. As I said before, the tickets do make things fair but waking up so early for the kind of sucks. It’s even worse since other programs don’t start until 9:00 AM. I did get my ticket but I did also needed to wait for a couple of hours. I ultimately did some practicum work until the Manga Library opened. Speaking of which… 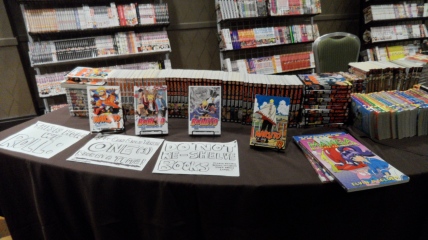 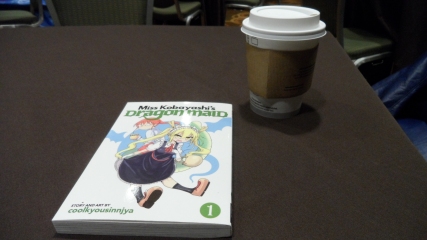 Oh Manga Library, how I miss you so.

Not going to lie, this is actually one of my favorite parts of the con. It’s nice reprieve from all the chaos going on in the Hynnes Convention Center and it’s a very pleasant meeting spot for friends. I also just like seeing all that manga collected in one room (one of these days, I’ll build my own library). I didn’t get the chance to chill there for the past two days but I finally had the chance to do so today since I was just waiting for the autograph session. If anyone asks, I opted to read the first volume of Ms. Kobayashi’s Dragon Maid. I love the anime adaptation so reading the manga was nice (although I must say that it’s just as lewd as the anime…).

ASAKA is super nice to meet in person; very happy to be at AB and to meet her friends.  In case anyone asks, I got my imported CD copy of “Shiny Days” signed. She actually signed the front and back of the CD booklet, the front for me and the back for my brother (that was actually a last minute decision on my part but I’m glad that I went through with it and ASAKA was cool about it). The encounter was obviously brief since other people need to get their stuff signed but I’m glad I got the chance. I hope other fans who were in line with me had a great time meeting her.

And that’s actually the last big event I did for Sunday. After that, I ate lunch and looked around the con a few more times before going home.

I just want to touch base on this.

So some background information: after the Marathon Bombing in 2013, Boston Conventions have tightened their security to keep things as safe as possible. Since then, Anime Boston requires all attendees to get their bags checked before entering the con. Everyone understands that this is a necessity but it has caused a lot of impatience and displeasure nonetheless. I can’t quite comment on this year’s security since going to the con so early usually means less busy lines. Still, I do feel that there were more security checkpoints and more staff at said checkpoints so things have certainly come a long way since AB’s first implementation of this policy. 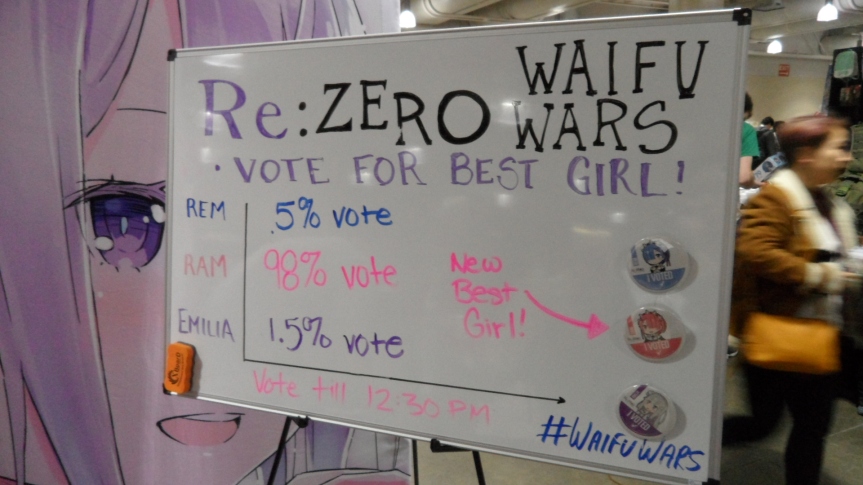 This poll is rigged I tell you…RIGGED! I don’t want to know what the final count will be (Edit: Just checked social media: Rem won!).

Some Properties I Spotted in Cosplay:

And that concludes my recap on my time at Anime Boston 2018. Writing about conventions is new for me as well as something I’m going to need to get used to (I also need to take more pictures next time…). Still, I had enjoyed the con and writing these posts so I’m hoping to do it again at the next con. Right now, I’m planning on going to Fan Expo Boston later this summer. Until then, I’ll see you later!