A lot of you don’t know this about me but I’m actually a collector, primarily for video games but every once in a while, I do often jump on a fancy blu-ray set and steelbook. For months now, I’ve actually considered making unboxing posts as a simple way to show that side of my otaku career. Why was I holding it off? Honestly, it’s just negligence; it just isn’t priority to me compare to covering anime which is the focal point of my blog. But no matter. There’s a number of items I recently got that need to be opened so while I do that, I figured I should blog about it along the way.

First off, we have the steelbook edition for Cowboy Bebop: The Movie which came out last month. This kind of got lost in the list of recent purchases I made but then Netflix announced that they’re remaking Cowboy Bebop in live-action (*shudder*) so then I remembered I should get around to opening this steelbook. I really like the movie. It’s admittedly just a feature-length episode of the show but considering how good the show is to begin with, that’s still high praise. You don’t see a lot of anime films get a steelbook release so when I saw this movie getting such treatment, I just had to get it. 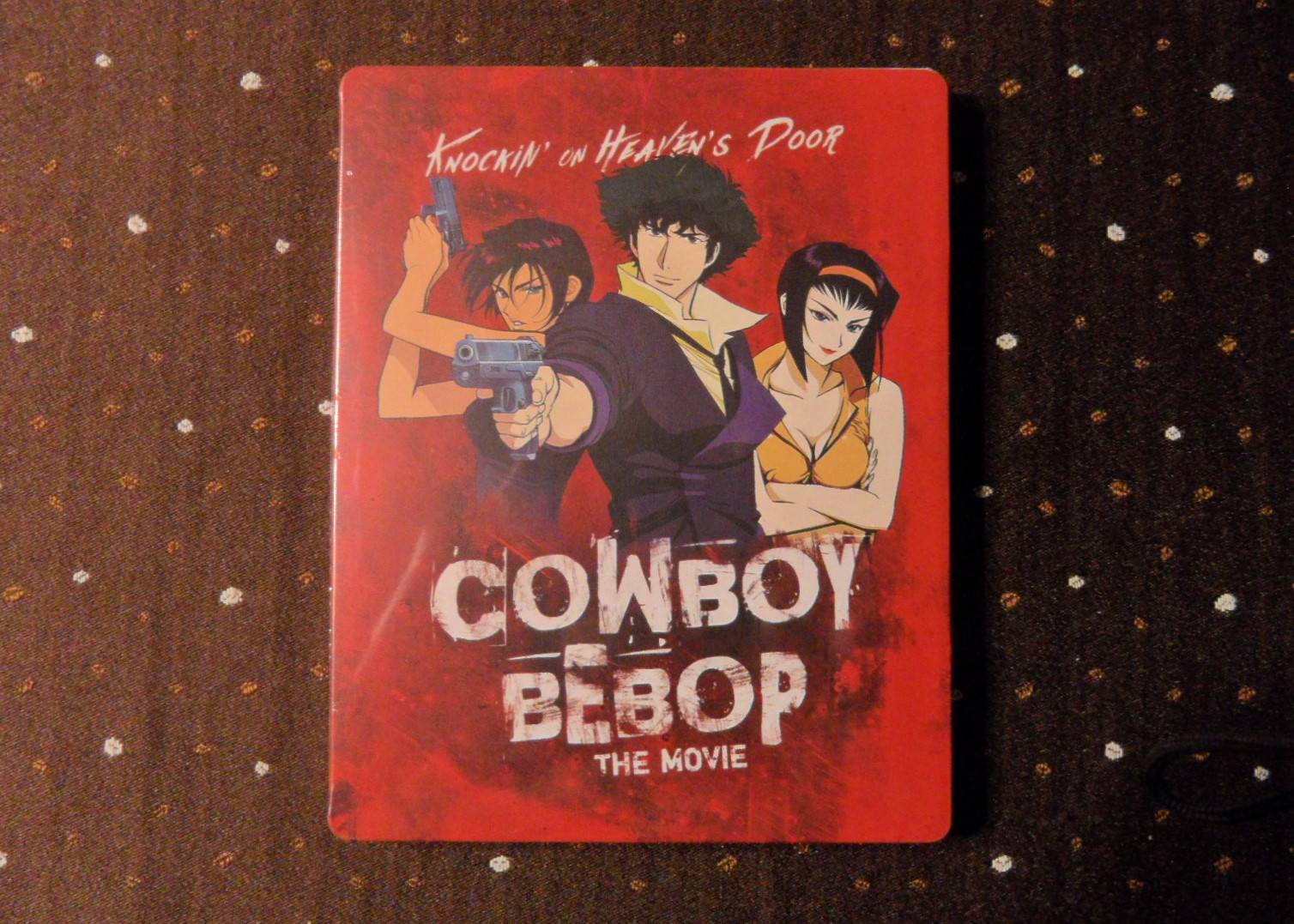 The front cover looks like a variant of the original American poster with Spike, Faye, and Elektra. The difference is that the background is simplified; just a nice, gritty gradient of red. Including the original Japanese subtitle, Knocking on Heaven’s Door, as a sort of tagline is a really nice touch. 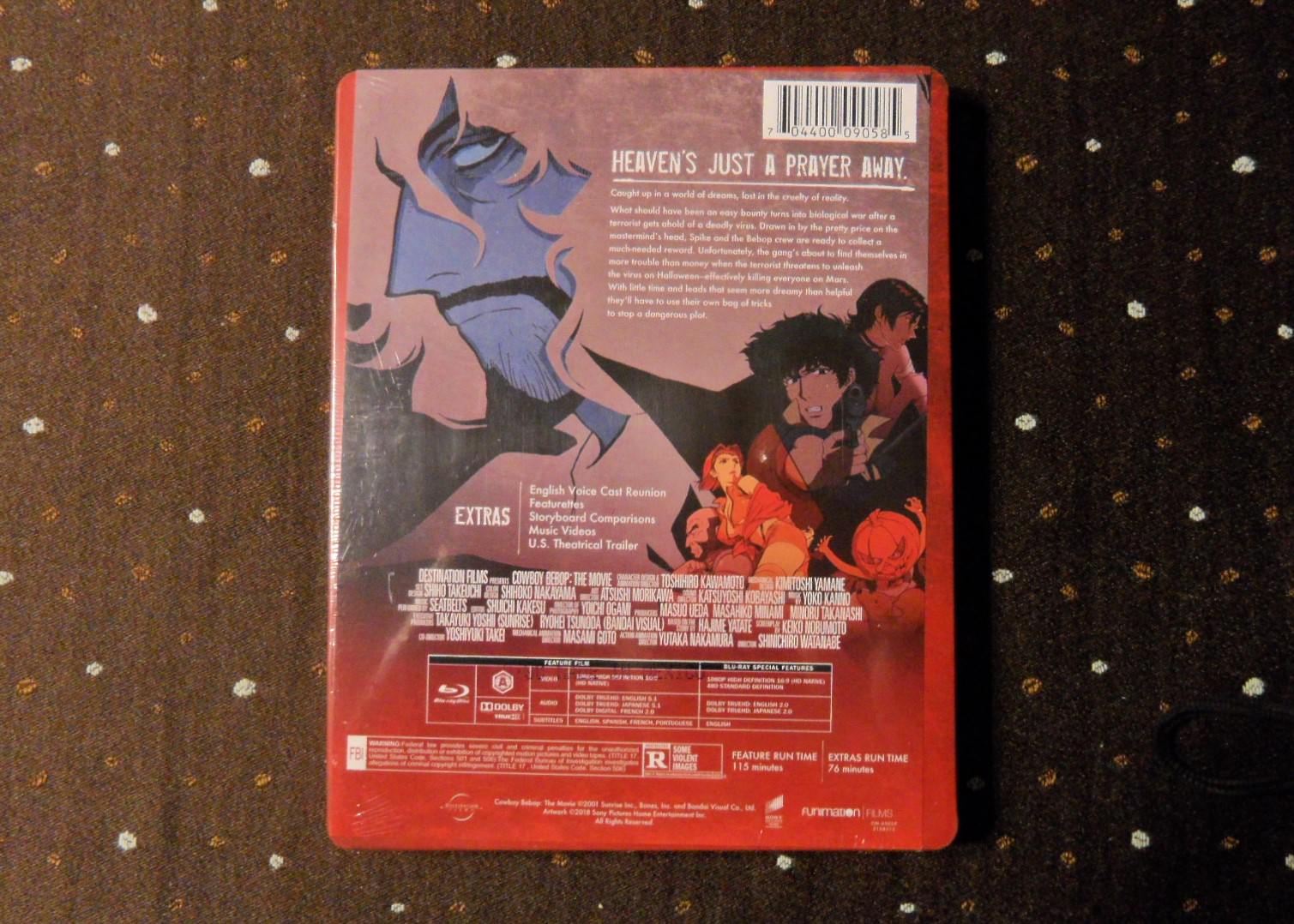 As is generally the case with steelbook releases, the information on the back is actually written on a piece of paper glued to the case. I always find this is an odd practice but the glue comes off really easily with no residue so can’t complain there. Plus: 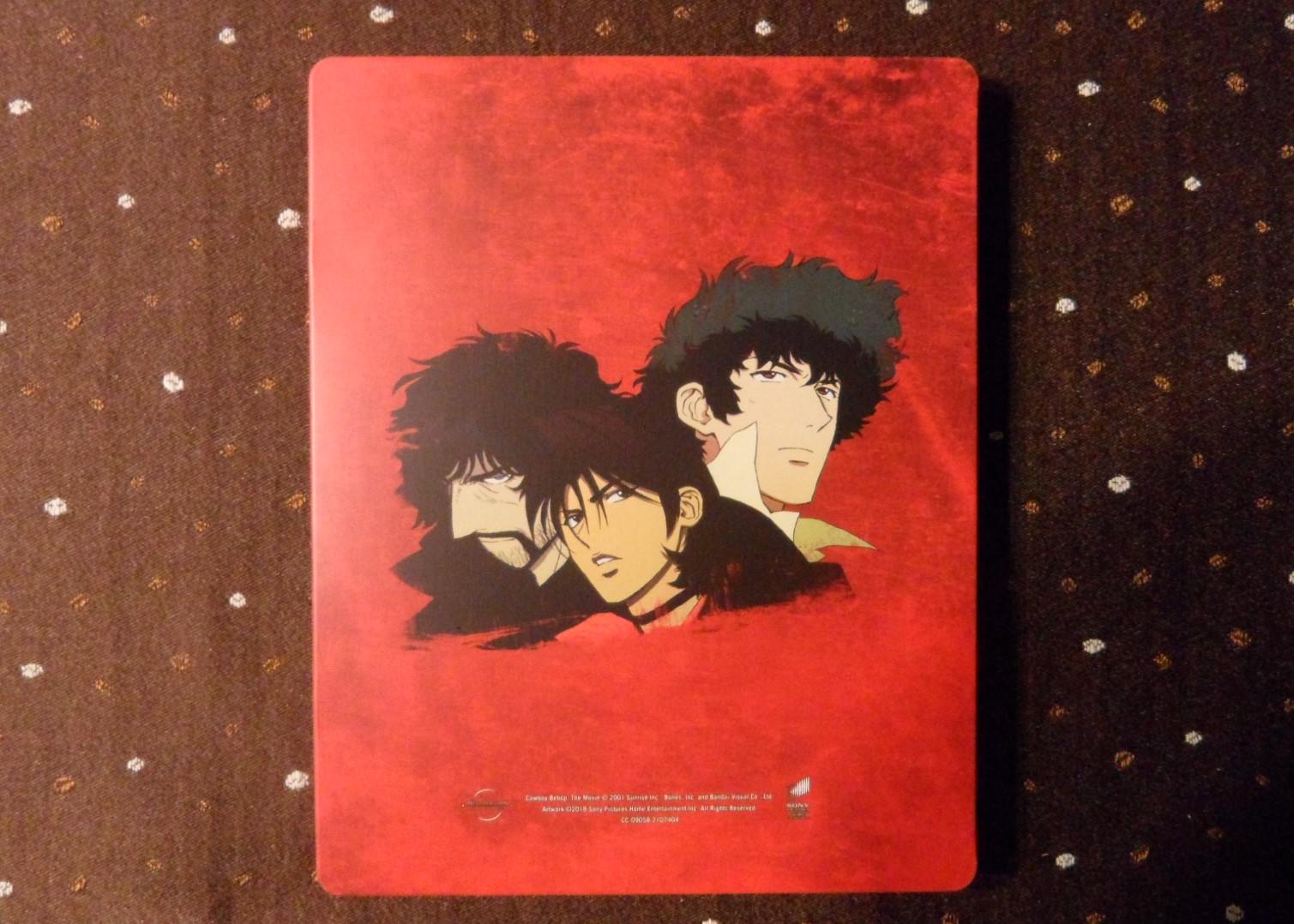 You get to have fancy art on the back of the case, free of all that information. The visual here is actually taken from the original Japanese poster which is fitting to have on the back since, as mentioned earlier, the front shows the American poster. 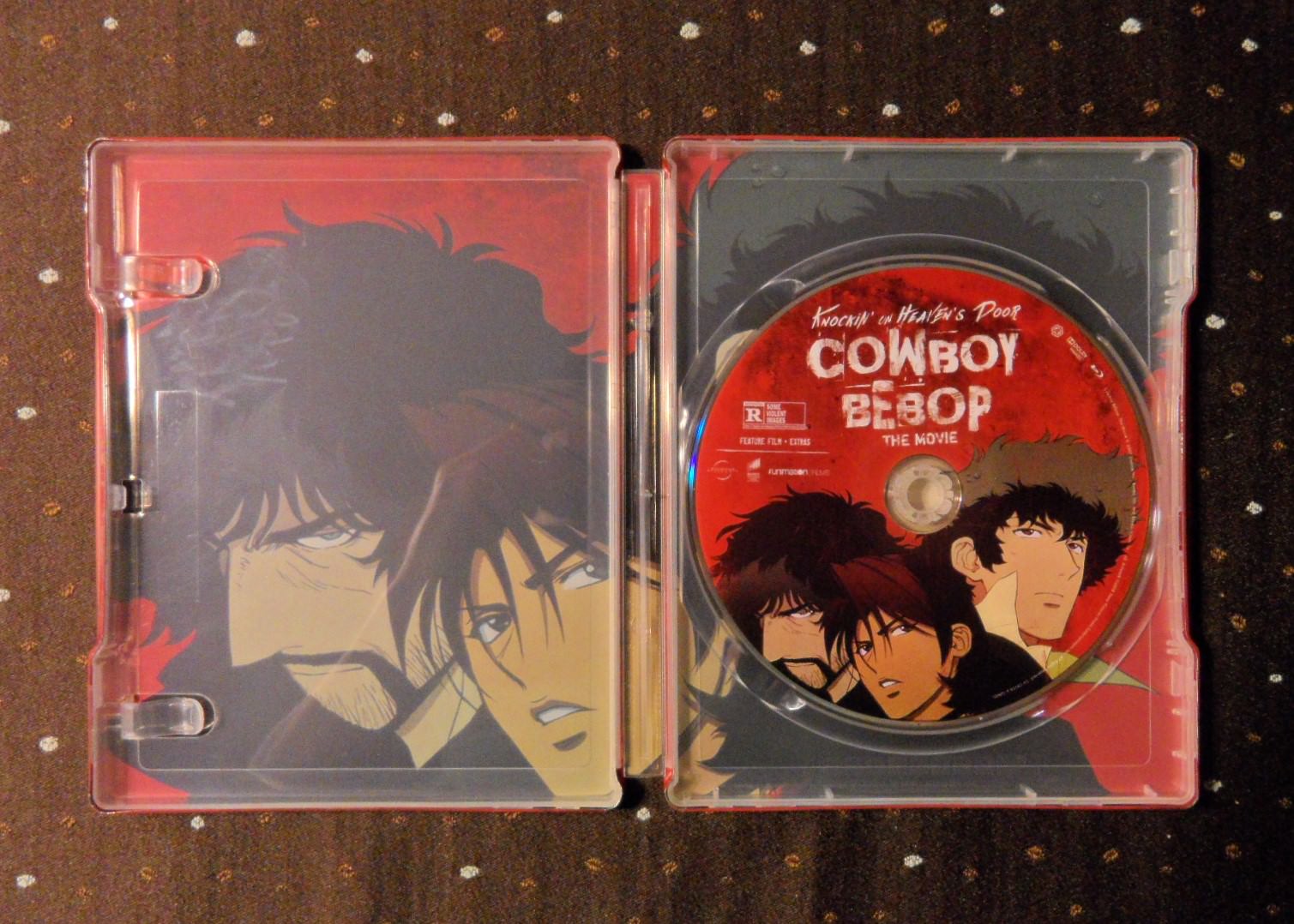 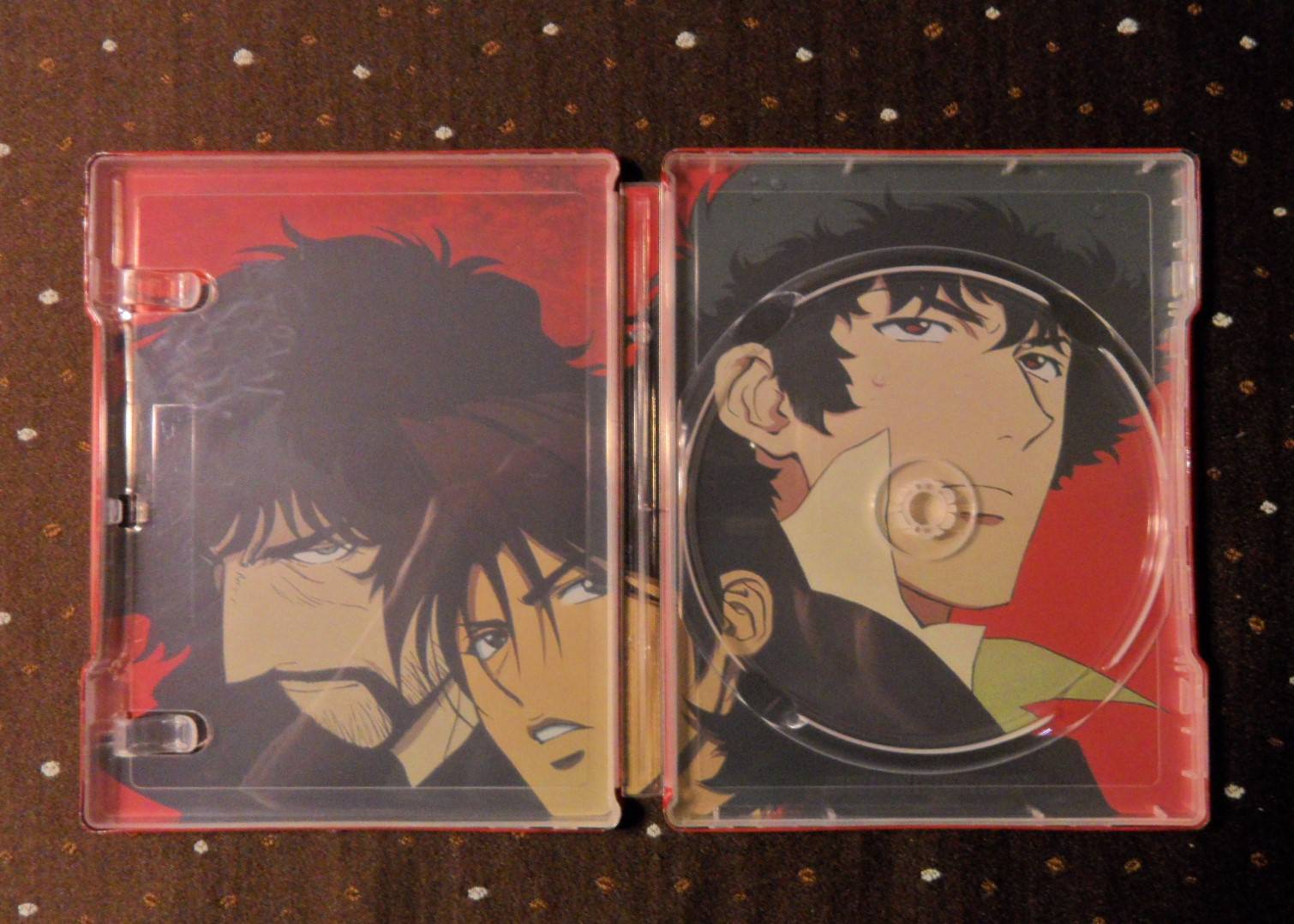 Here’s something that I find a little disappointing: the interior art is just an enlargement of the art you have on the back. It’s not a terrible choice for the inside of the case. I like how the designers divided Spike and the movie exclusive characters on separate sides; it just feels aesthetically pleasing to me for some reason. Still, this is feeling a little repetitive. 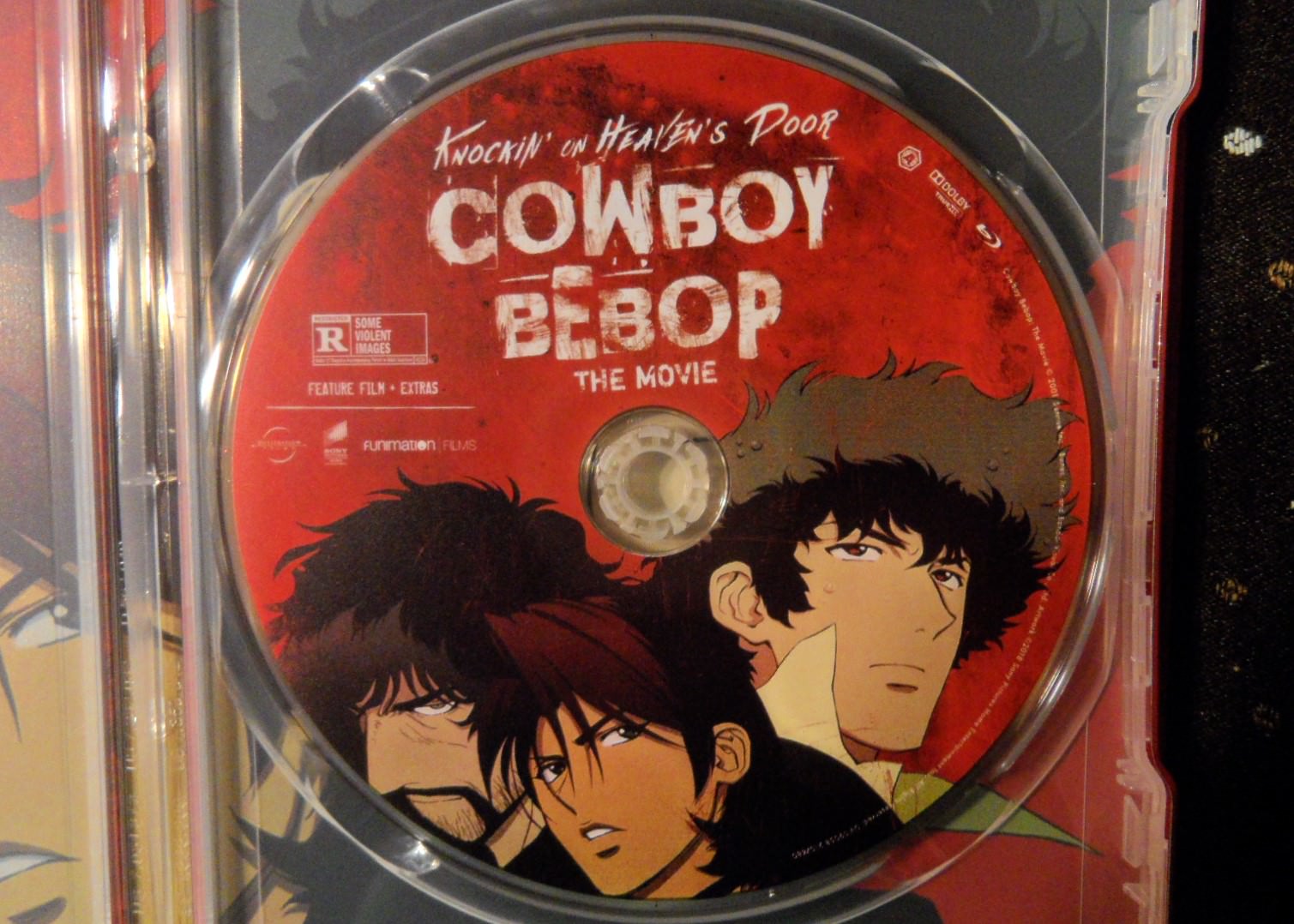 That the disc has the same exact art doesn’t help either. Again it fits the frame but I would’ve liked more variety in the art.

I suppose this isn’t the most lavish steelbook release out there but I am just glad happy to finally have Cowboy Bebop: The Movie in my collection, especially in a steelbook no less. Hopefully, we’ll see more of these anime steelbooks in the near future.