This unboxing post is long overdue by a few weeks. No fancy excuse or anything. It’s just that, since I’m not running an unboxing blog, this kind of post just isn’t a priority for me. Whatever, I’m getting around to it now.

I’ve made it no secret that I love Princess Principal. I just dig everything about it — the characters, the narrative structure, the art direction, the gadgets, the setting, everything. It’s up there among my favorite anime of 2017 and it also holds a special place in my heart as one of the first anime I ever covered for the blog. A few months ago, I was in the process of re-reviewing the whole show with stronger analyses but I’ve been busy with other stuff so that project is currently on hold…no one ask me when I’ll finally get back to working on it.

Anyway, it was a no-brainer that I’d get the Premium Box Set from Sentai Filmworks. It’s a bit on the expensive side though. I paid $108 but the MSRP is apparently even higher at $179.98! Damn. This definitely a bullet only diehard fans will bite on. That said, this box set does come with a ton of goodies. In addition to the Blu-ray, you also get an art book/guide book, interviews with the cast and & crew, the storyboards to the first episode, a coaster set, and a poster! Let’s take a look, shall we? 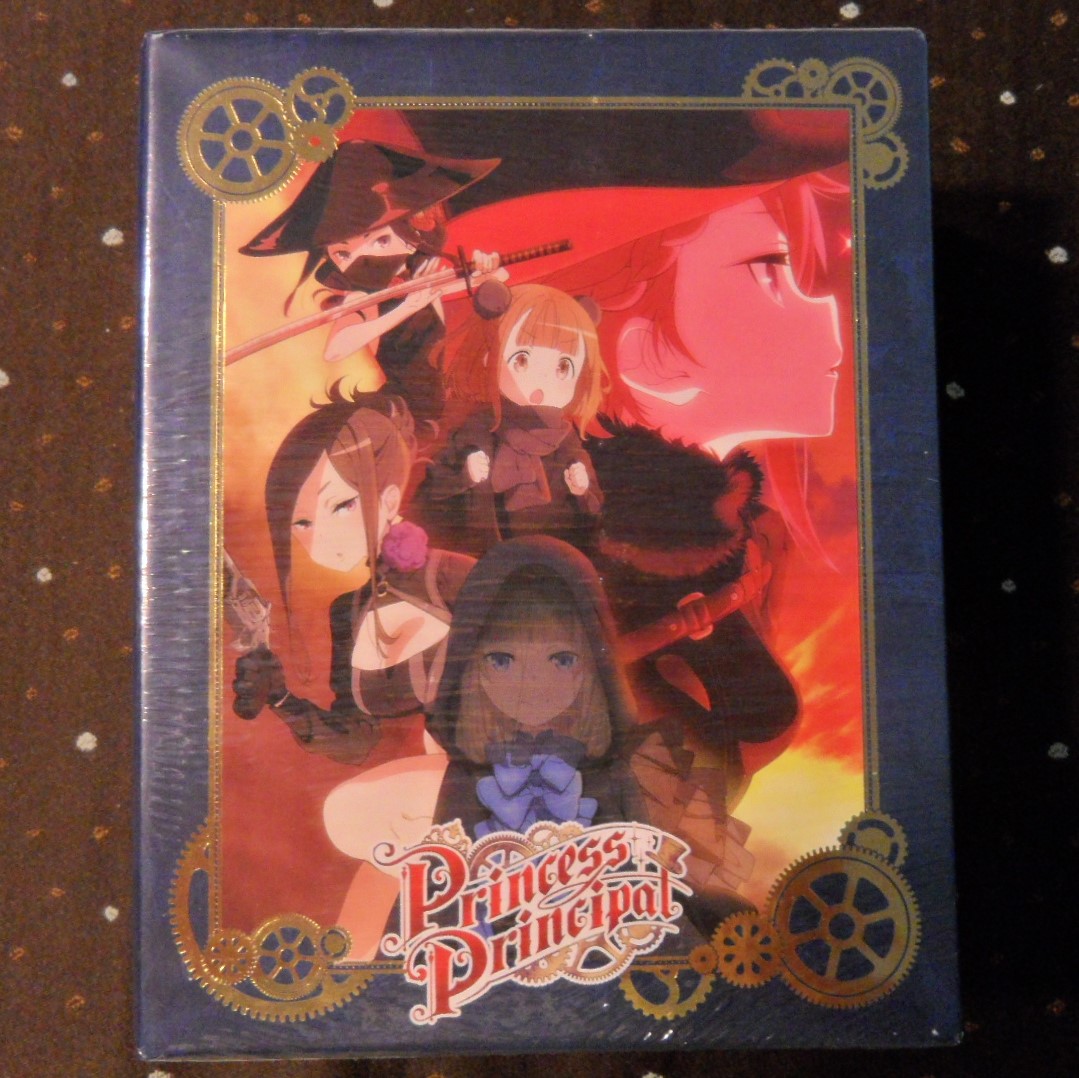 The front actually uses the key visual for the mobile game, Princess Principal: Game of Mission and not the one made for the show itself. That’s fine by me. I actually love the Game of Mission key visual more anyway since it shows everyone in their spy costumes. 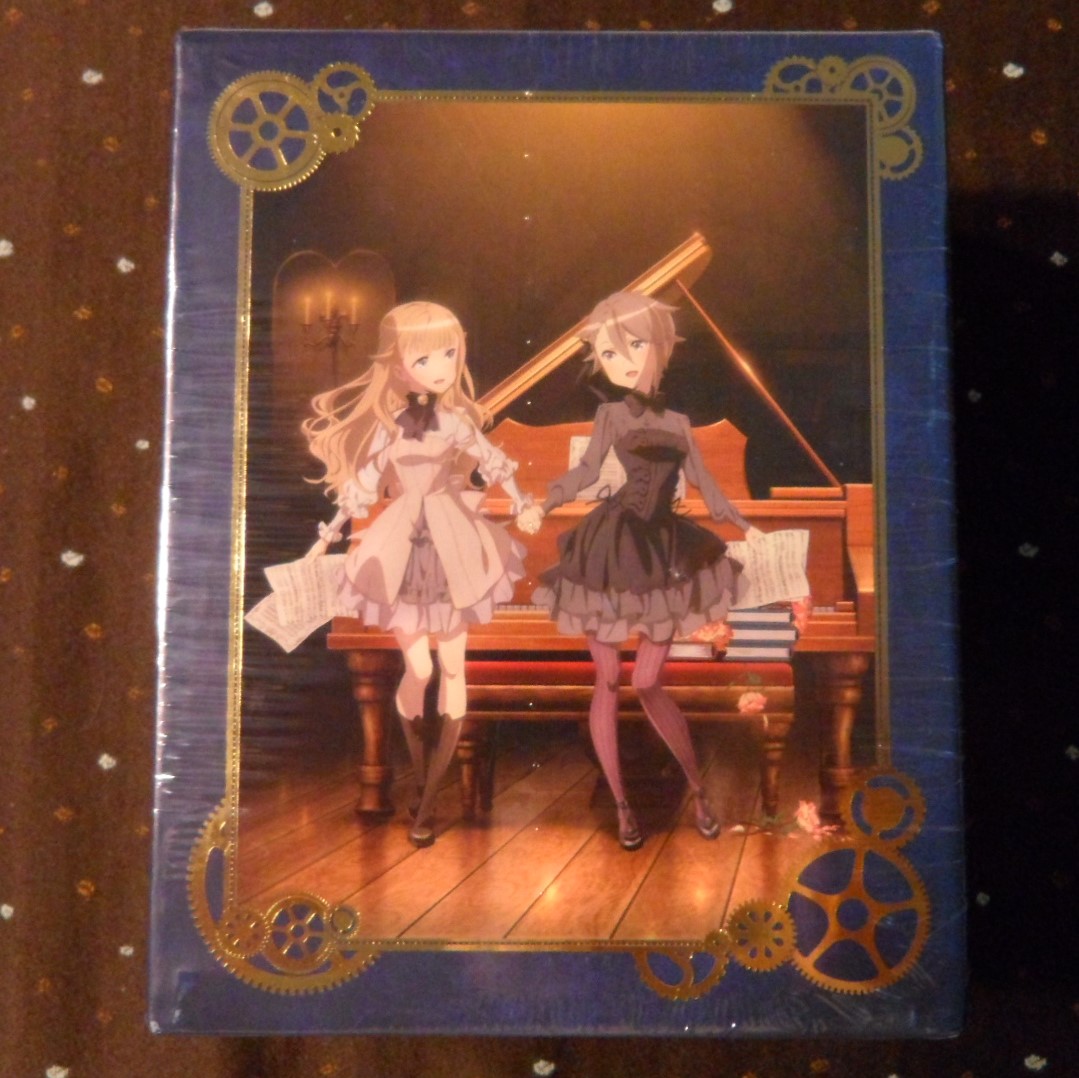 Here’s the back which uses one of the cover arts from the sixth Japanese Blu-ray/DVD volume.

You know, I was actually tempted to import the Japanese Blu-rays because I love the show so much…I still kind of want do it…guys, help me. 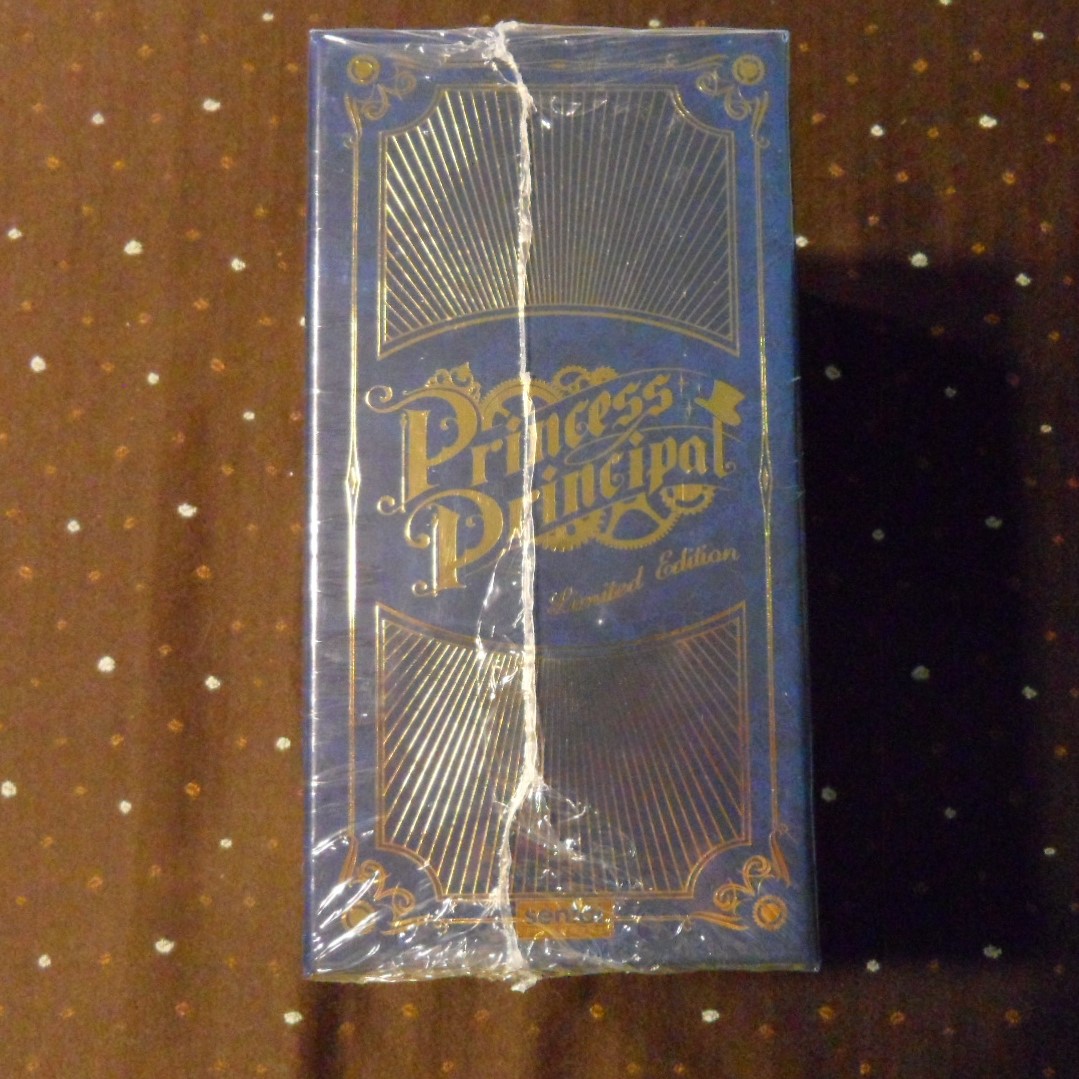 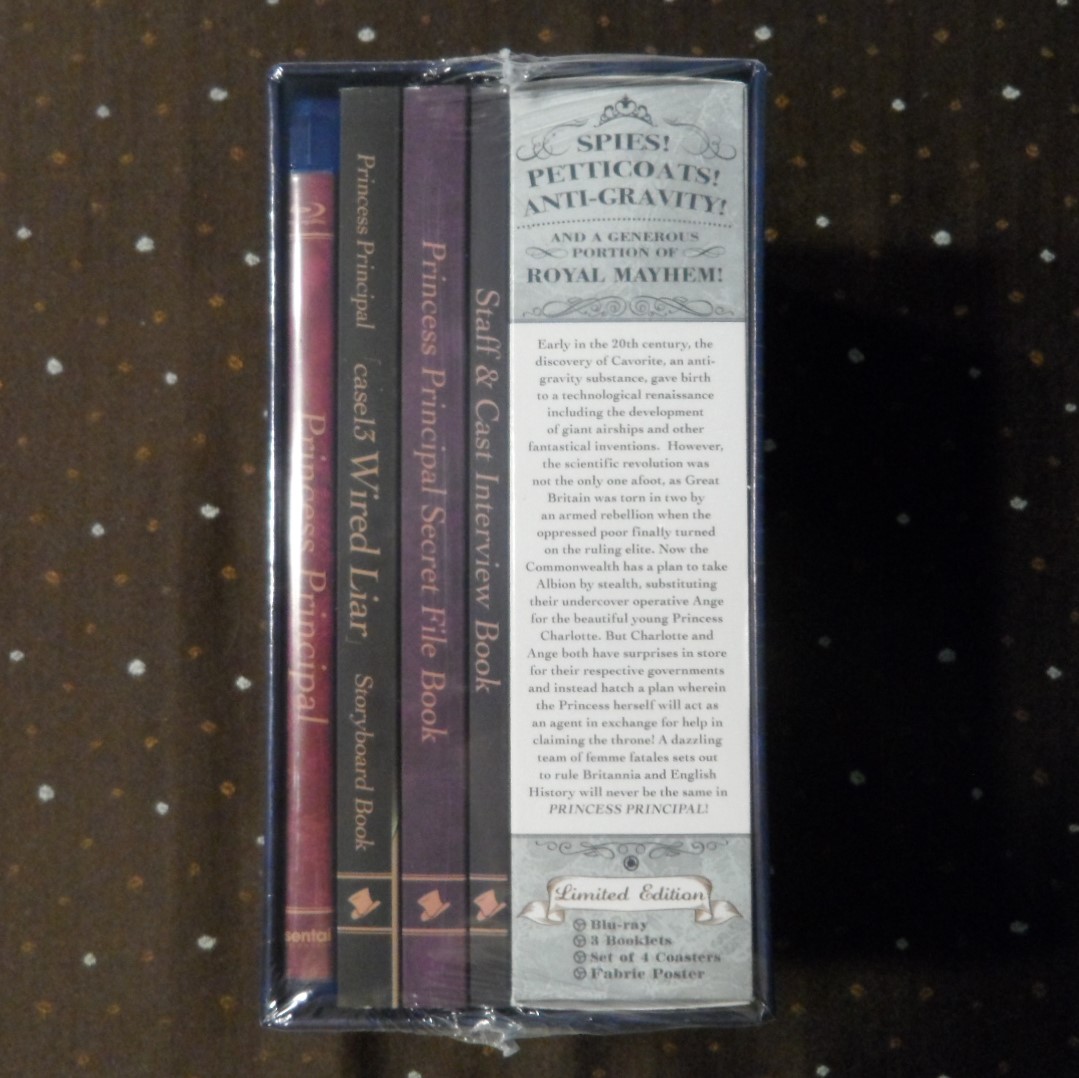 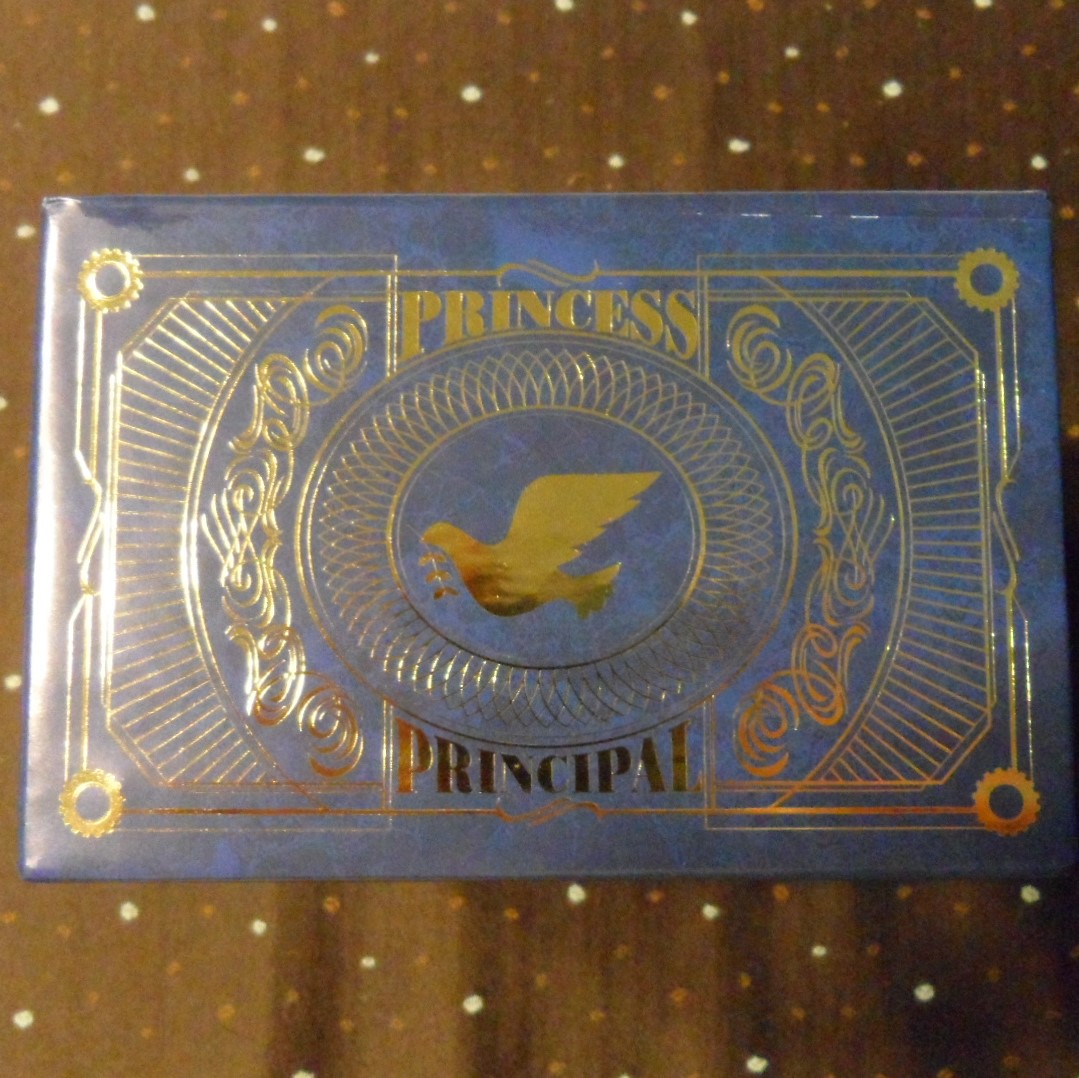 My copy of the box set has a few minor scuffs, presumably from shipping and handling, though I did notice that the actual production quality of the box raises an eyebrow. Like, you can tell from the image above the crease line from where the Princess Principal logo got printed onto the box. I still love the look of the box overall but little details like that do make me go “Um, Sentai?”. 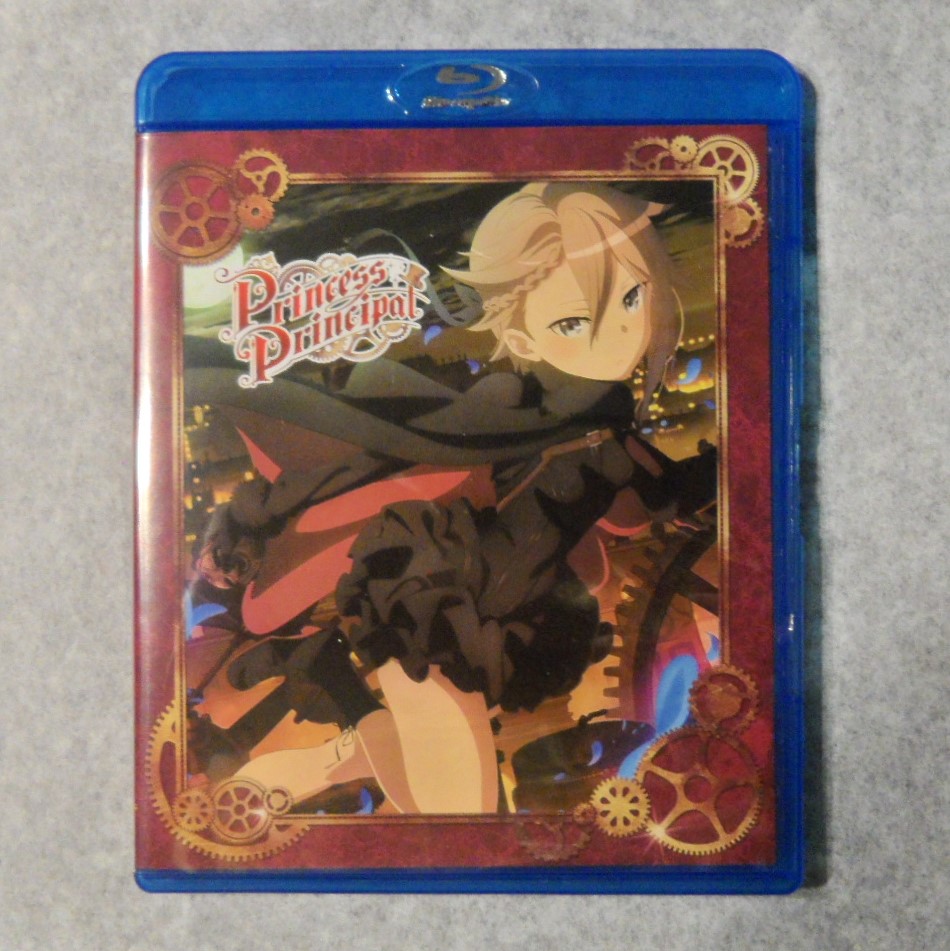 The front which uses art from the first Japanese Blu-ray/DVD volume. 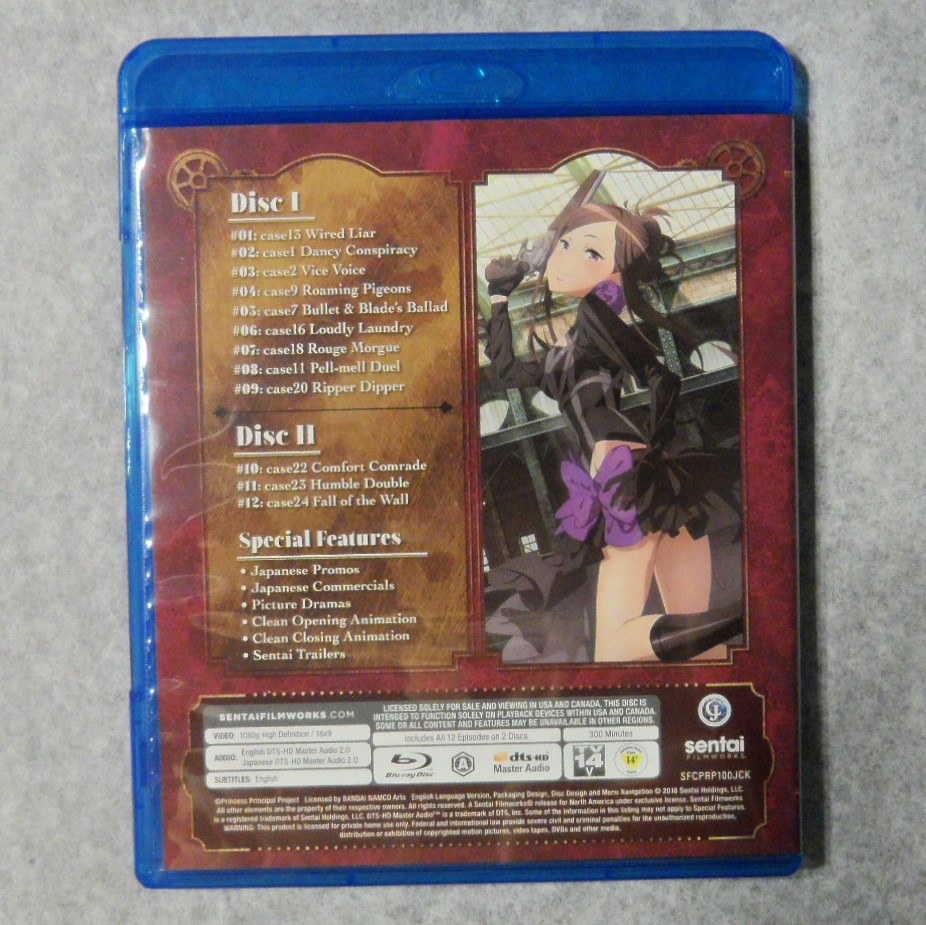 The back which uses art from the Japanese third Blu-ray/DVD volume.

Now, here’s something that I found odd: the episode order is different from how it was when Princess Principal aired on TV. Episodes 6 and 7 (Cases 18 and 16 respectively) swapped places. So did Episodes 8 and 9 (Cases 20 and 11 respectively). For the record, the numbering is like this on HIDIVE as well. And in case you don’t believe me, check Amazon Video which simulcasted the show for comparison’s sake. I don’t know what the deal is with that. It’s probably not a big deal since the story runs non-linearly but it is still odd to me. 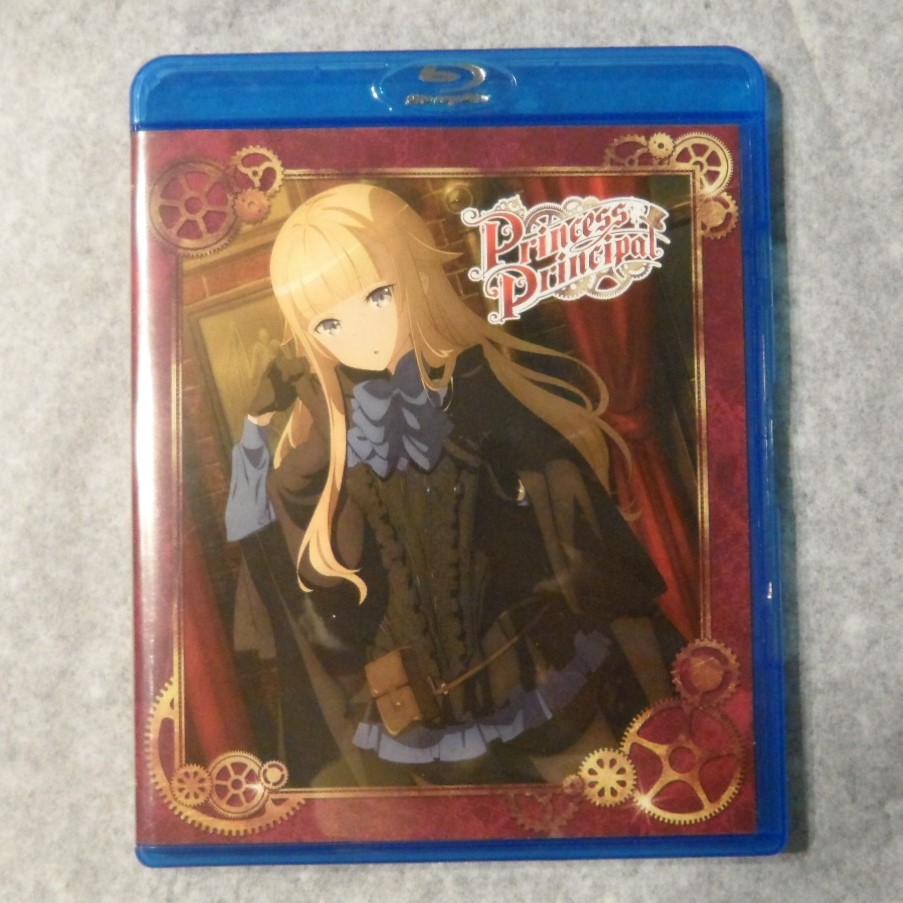 Here’s something neat: the Blu-ray has reversible cover art! I always love it when Blu-rays and video games do that. The front, by the way, uses art from the second Japanese Blu-ray/DVD volume. 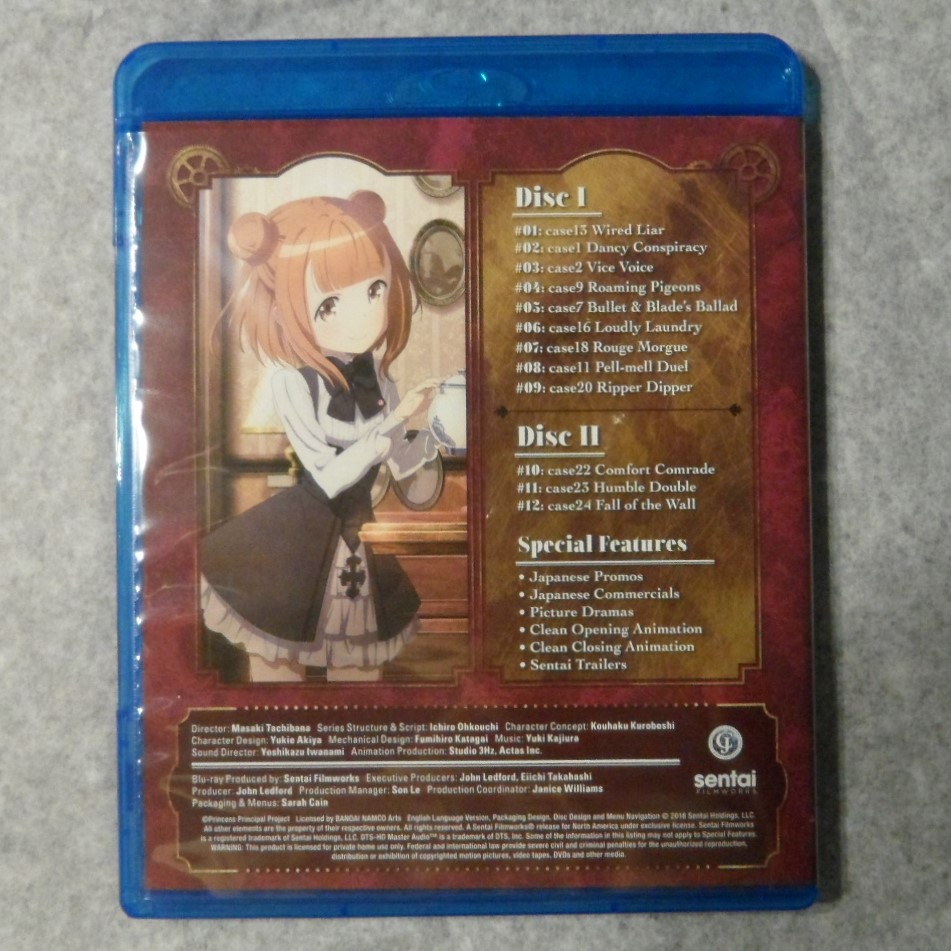 The back uses art from the fourth Japanese Blu-Ray/DVD volume. Poor Chise got snubbed a spot on the cover arts. What do you have against the Japanese, Sentai (an anime distributor)?! 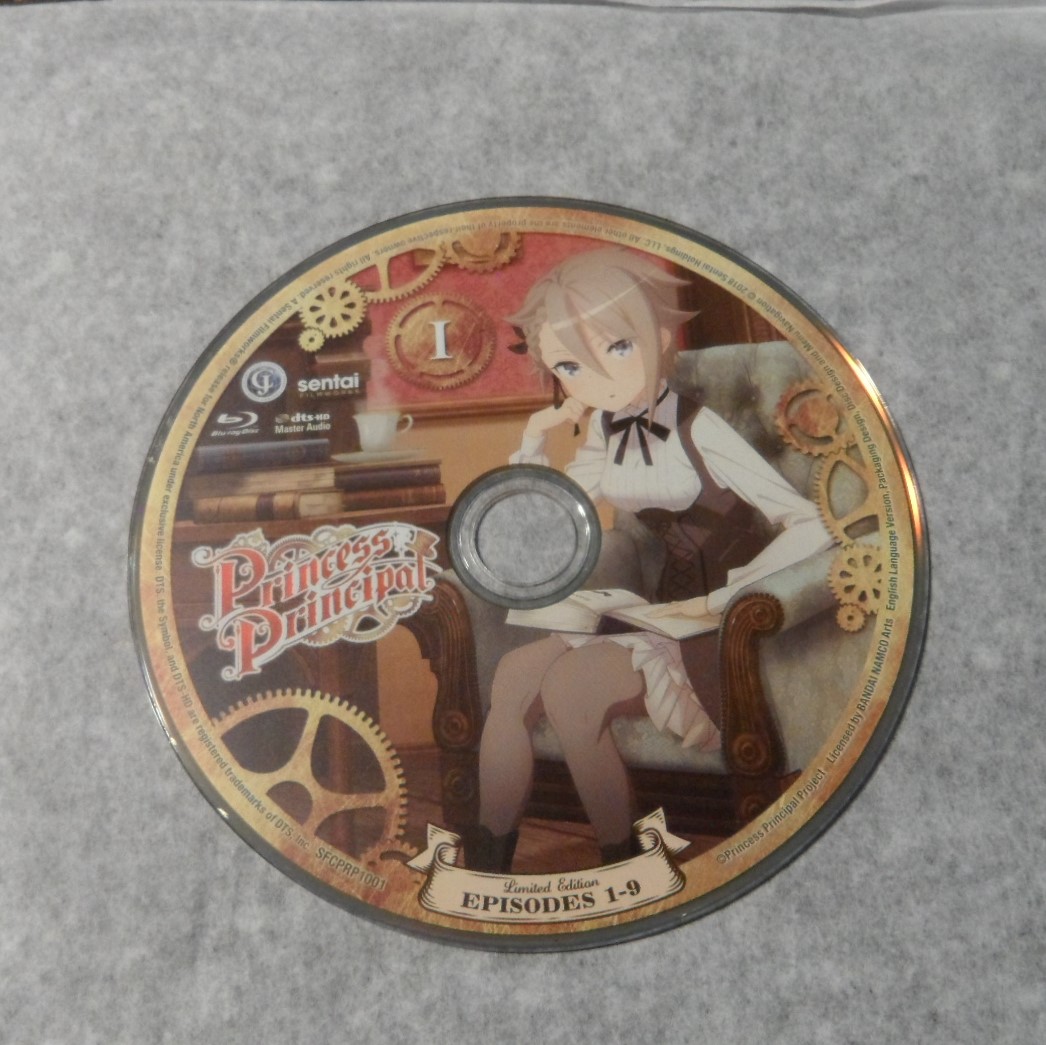 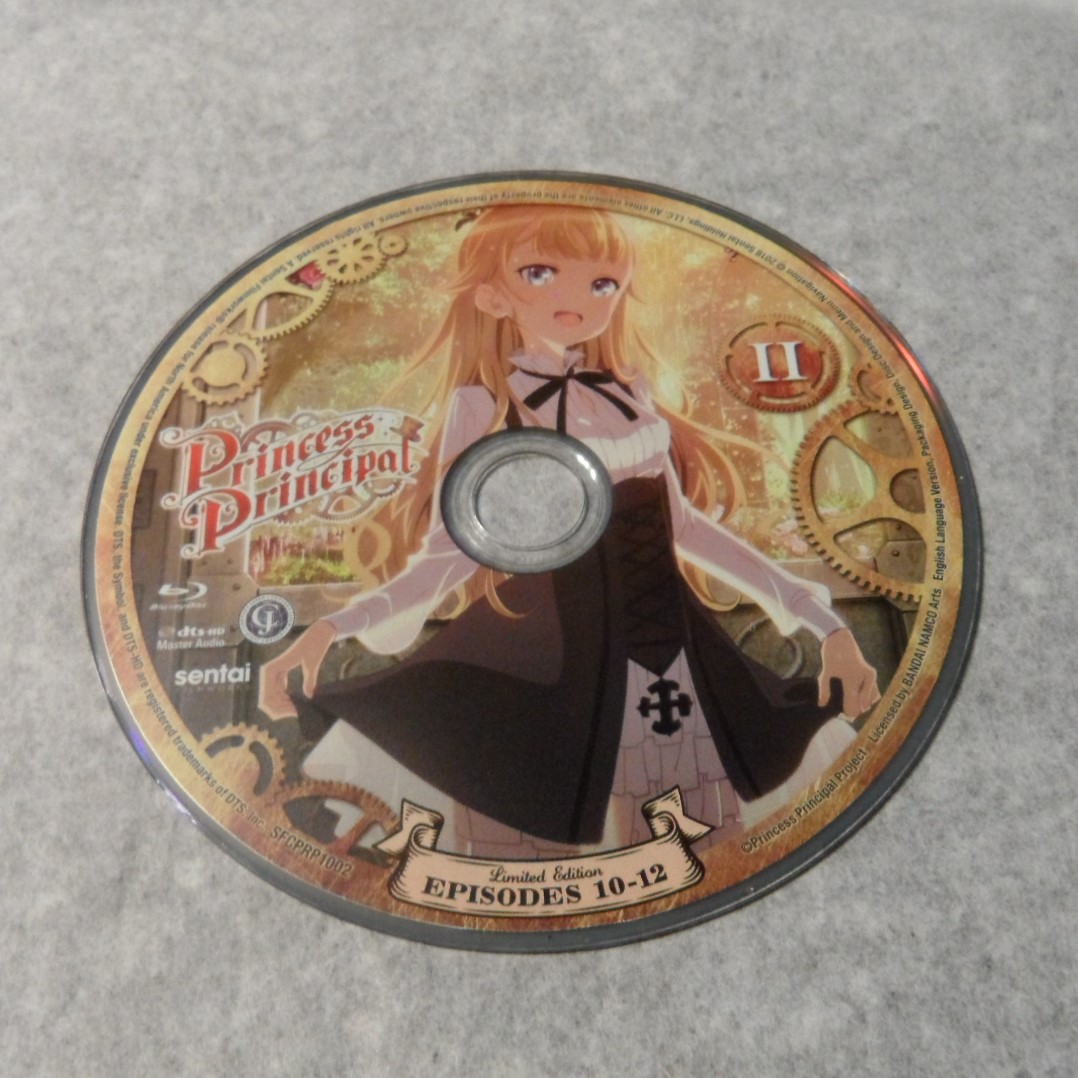 …And here’s Disc 2. For some reason, Disc 2 was on the left disc holder while Disc 1 was on the right…why did that bother me? I don’t know, I just think Disc 1 ought to be on the left. 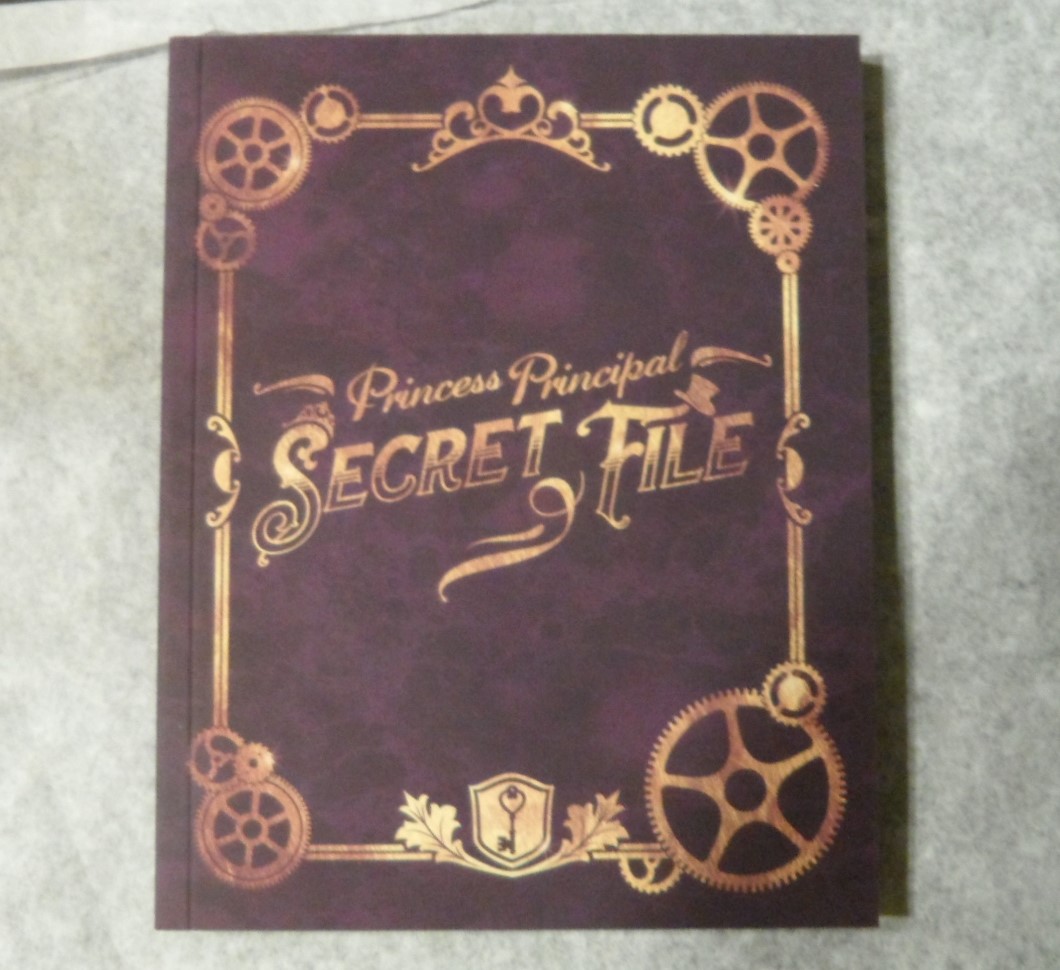 This is essentially a story guide and art book combined. I’ve seen the show a number of times so I’m really familiar with the story and therefore, could careless of fancily written summaries of each episode. The art book pages show a lot of drawings, really demonstrating the attention to detail in this show, though a lot of them you can easily find online so the special value kind of feels diminished. 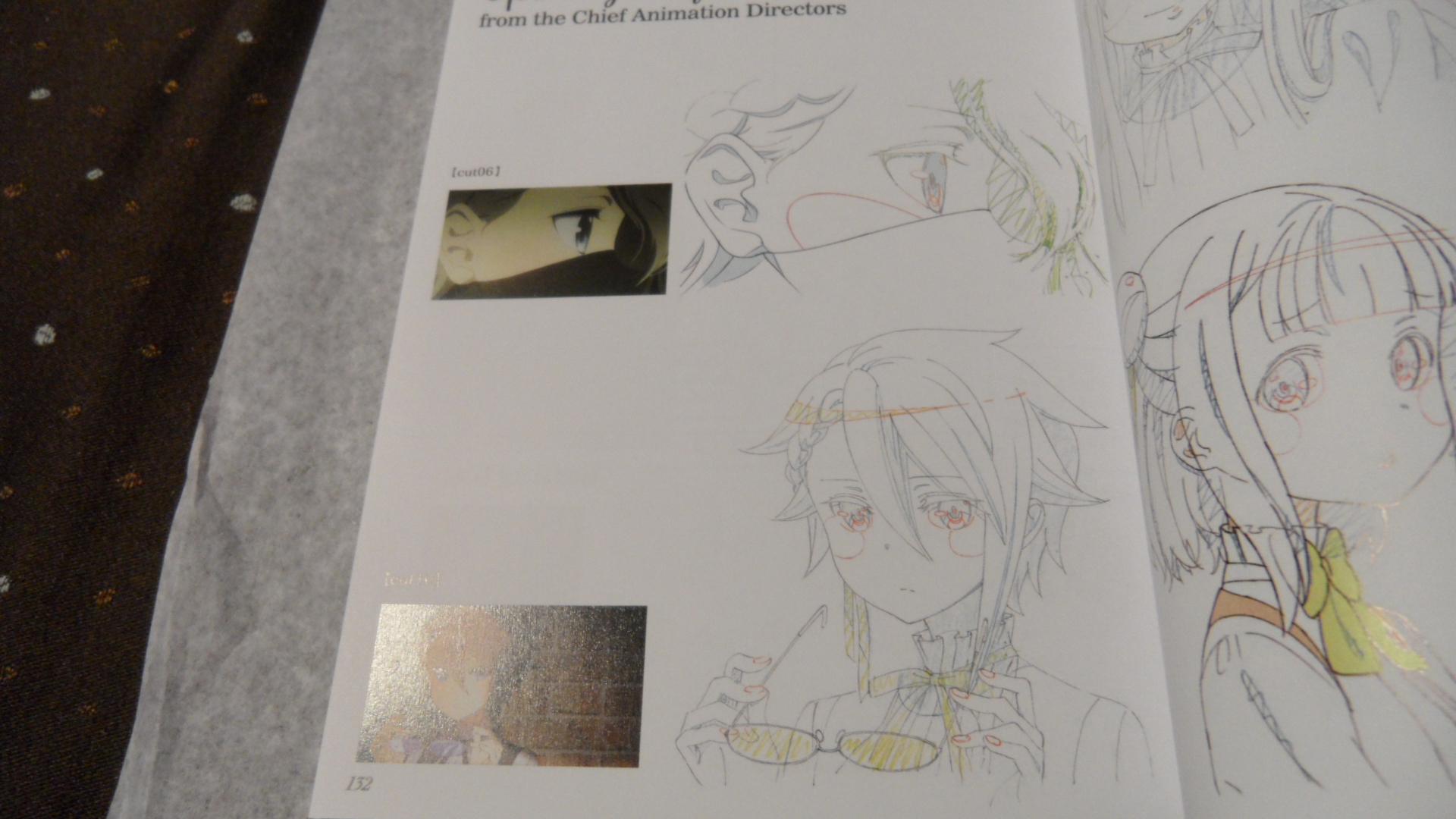 This, however, is my favorite section of the book: preliminary sketches from the OP and the final episode of the show. So damn cool. 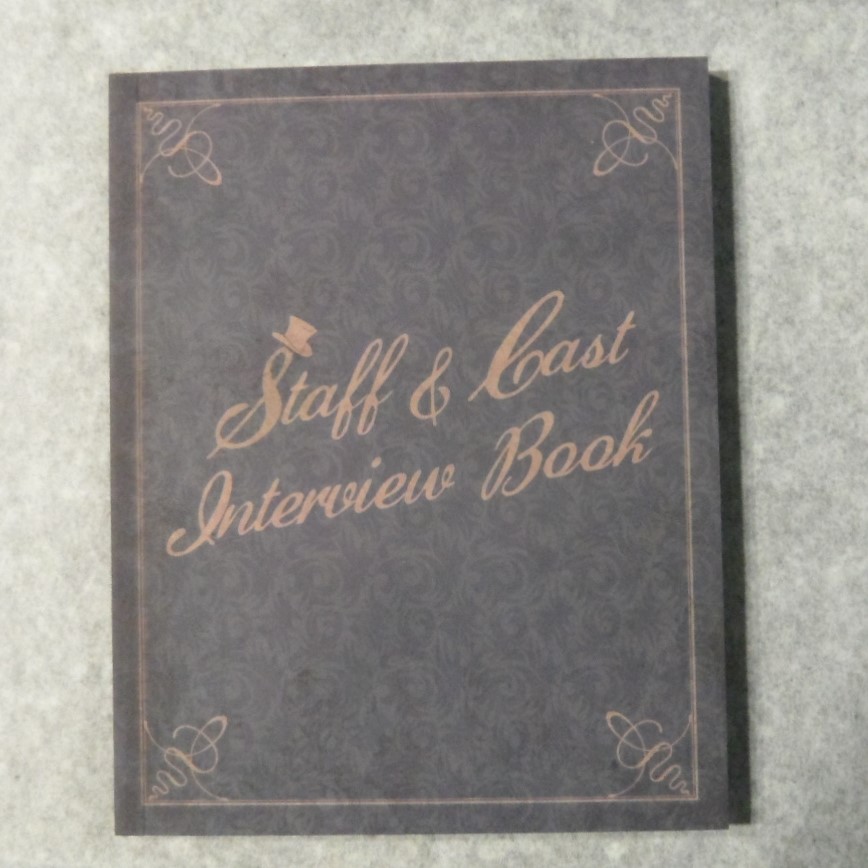 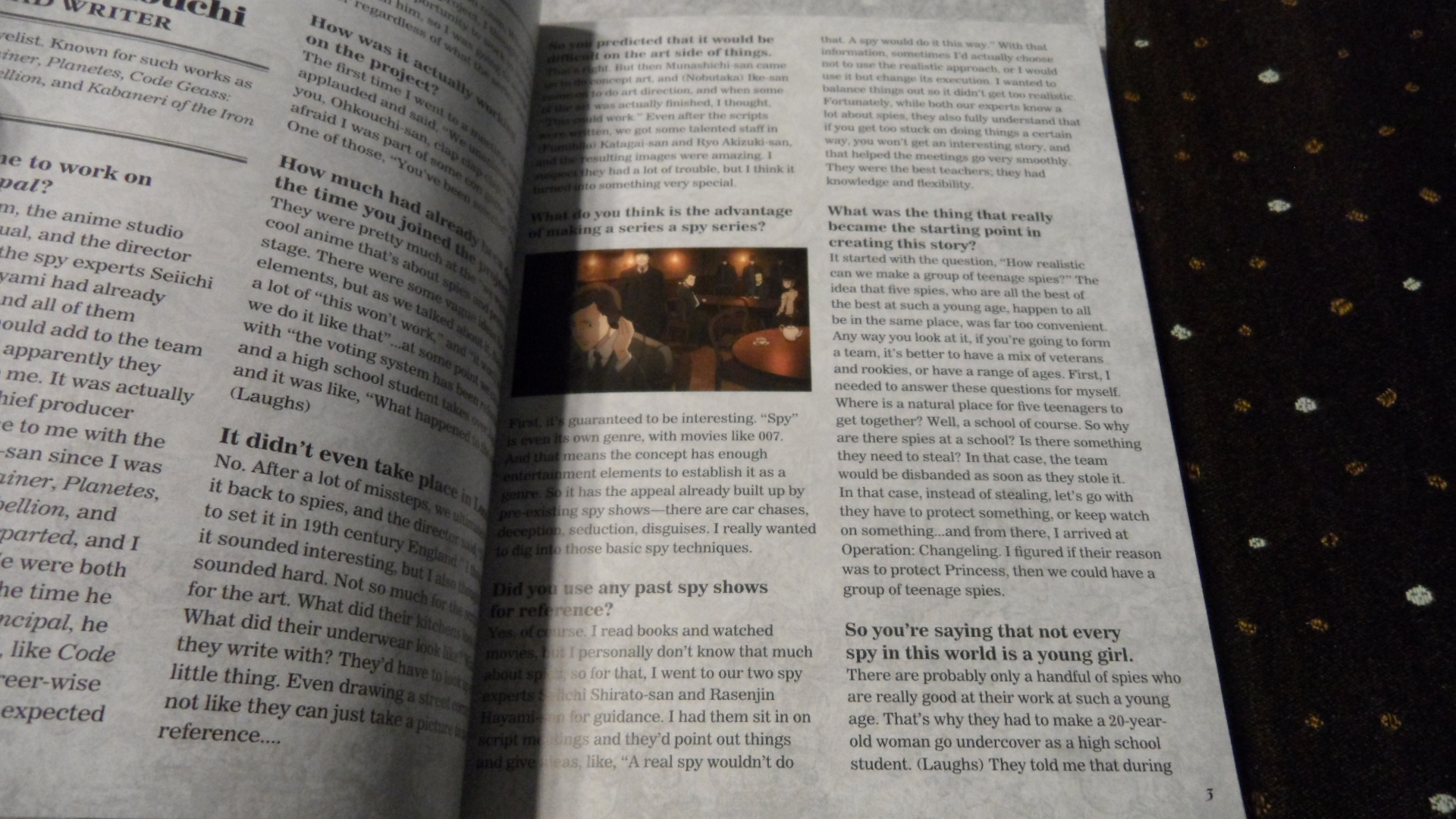 A lot of interviews with key staff members and the main cast. I currently have only skimmed through the pages but there’s some new tidbits about the show that I didn’t even notice before. Hmmm, maybe I should update the re-reviews I’ve already written so far in accordance to what new info I’m gaining from this book. Will get back to you on that. 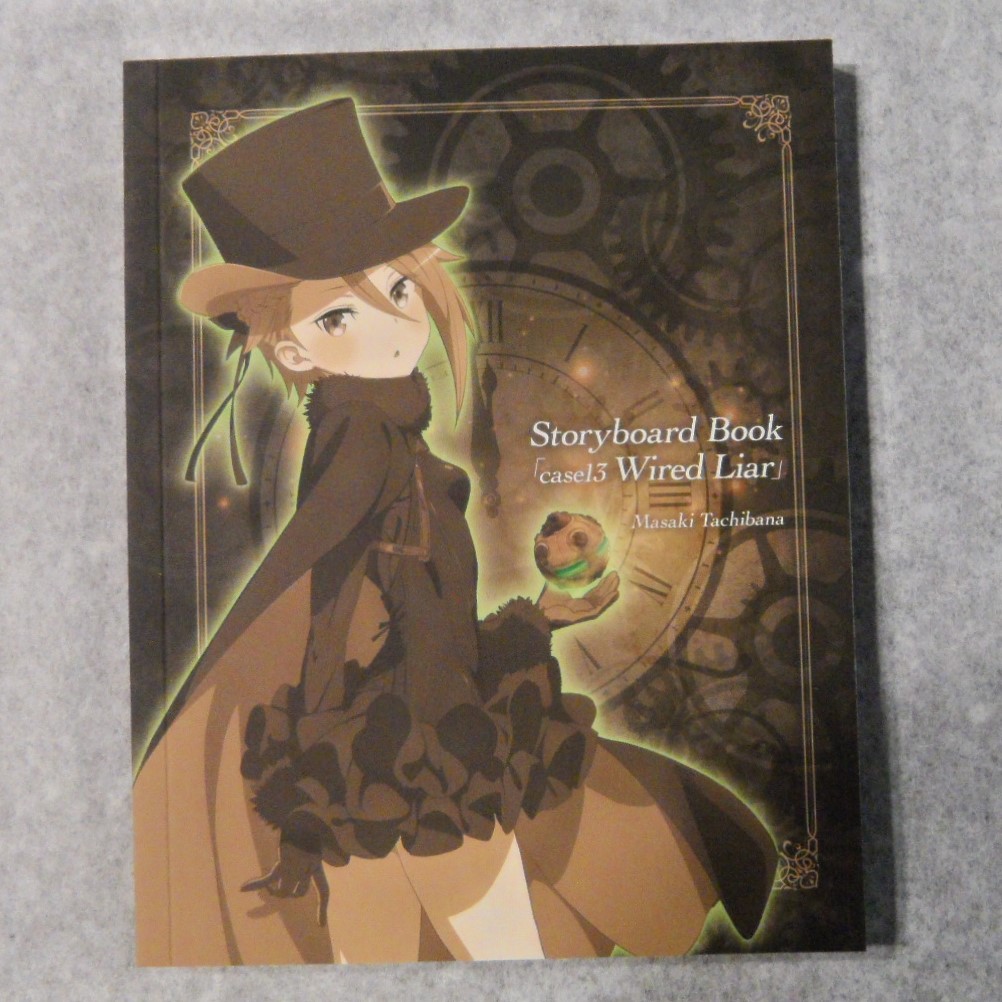 Now, this is a Limited Edition Extra. I always wondered what the storyboard of an anime episode looks like and this definitely sates that curiosity. Granted, I’d ideally like to see the storyboards for all the episodes in Princess Principal but this still suffices. 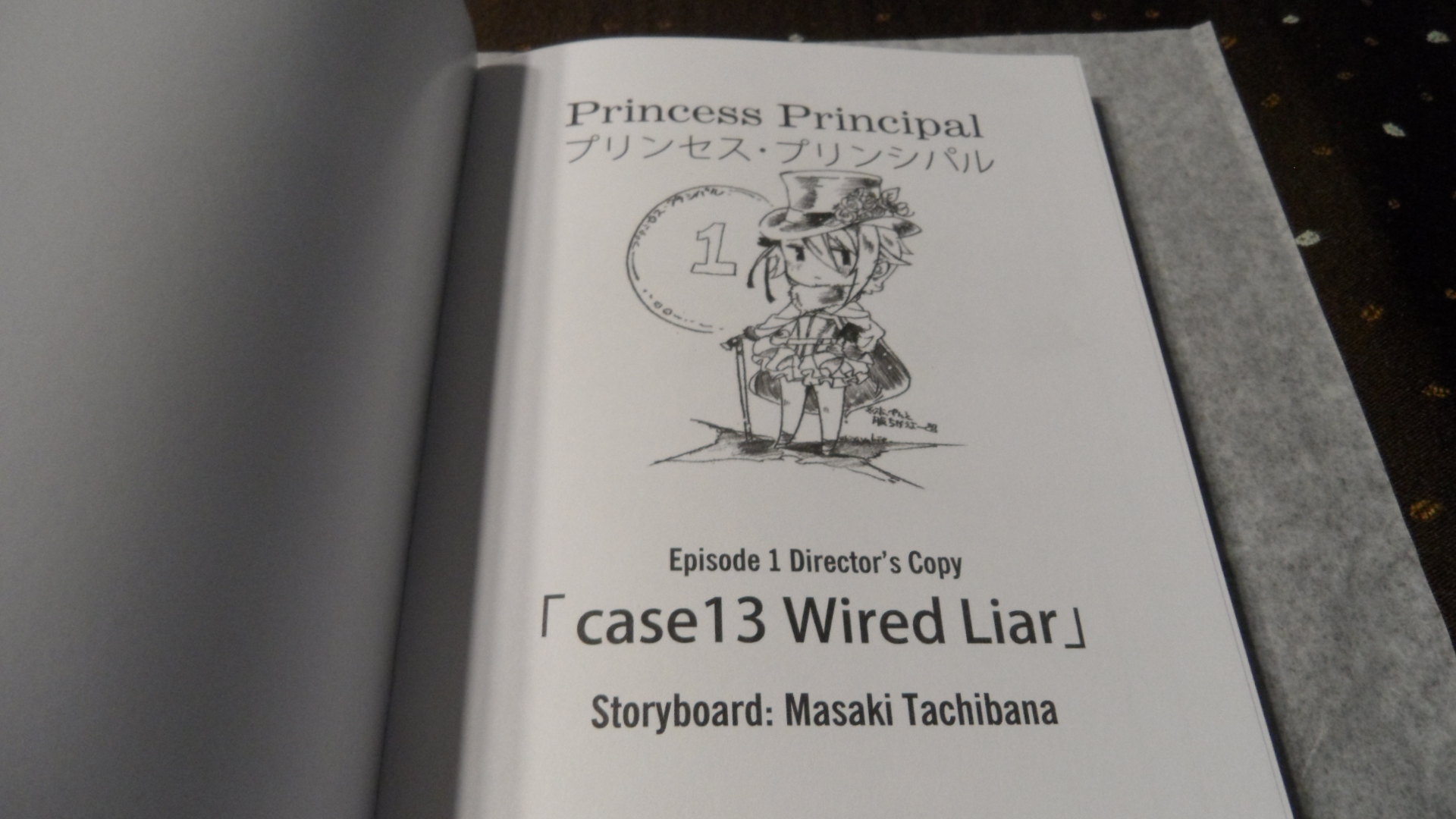 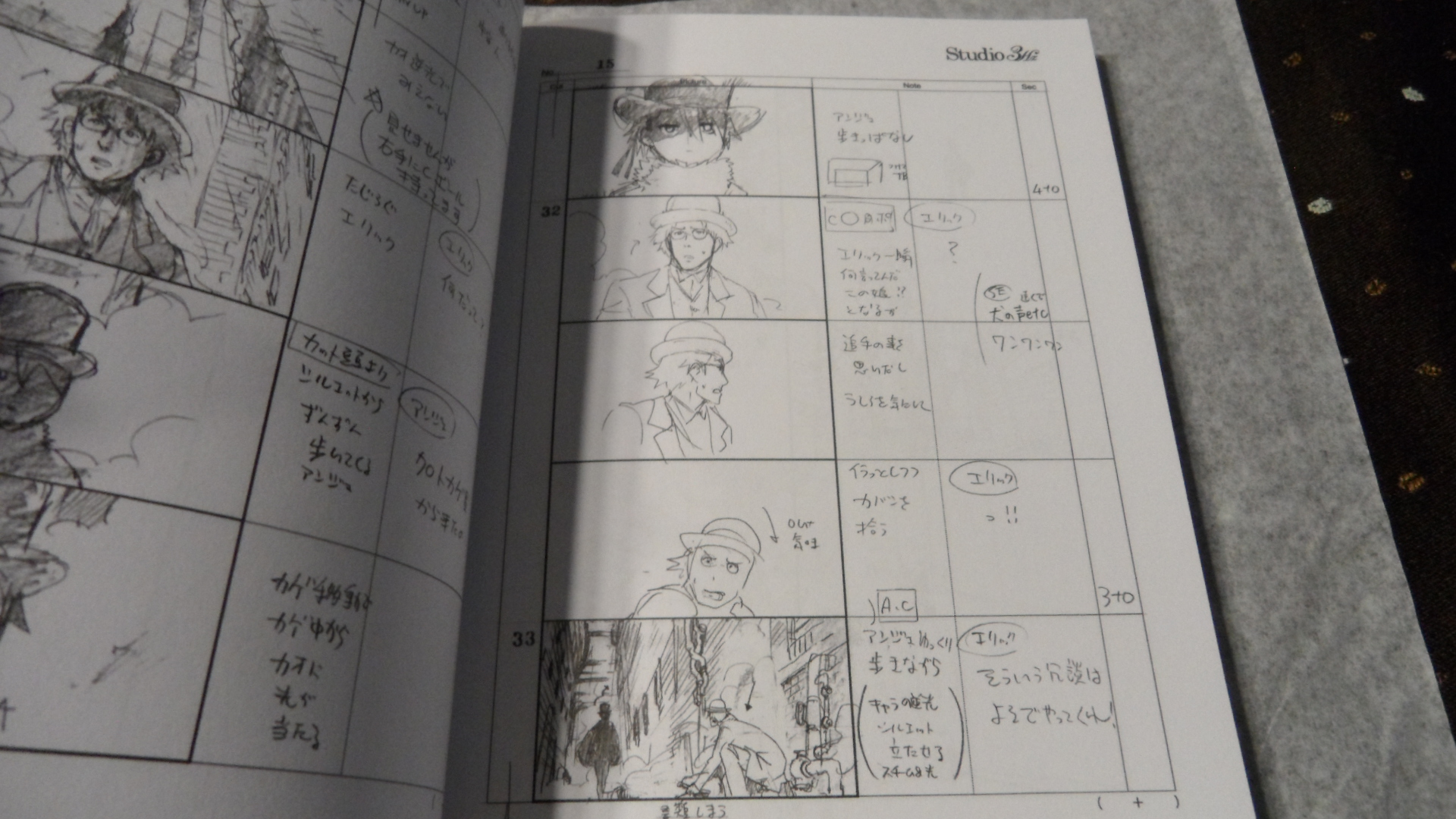 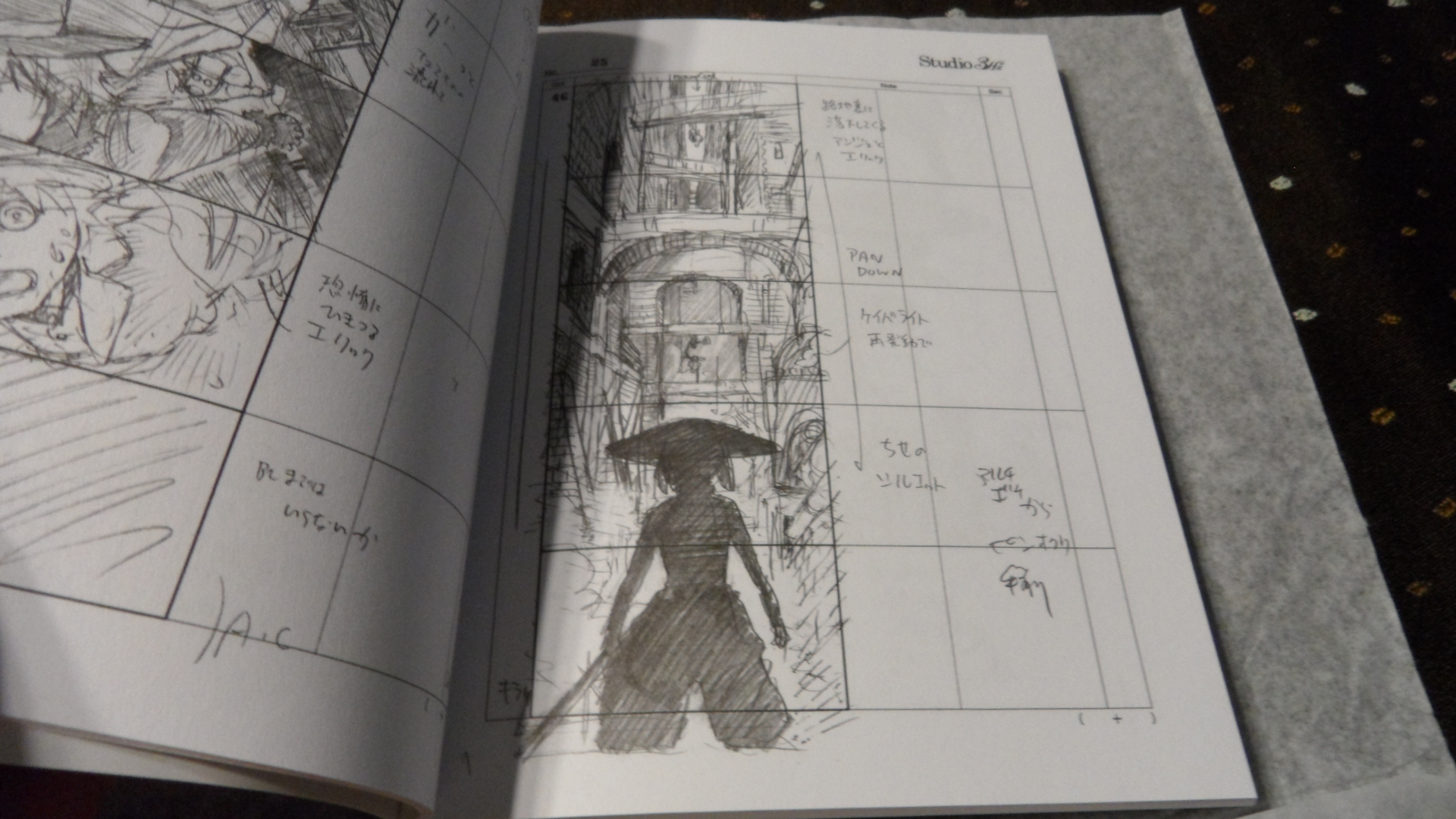 Unfortunately, the entire storyboard notes are still in Japanese. It would’ve been nice to see them translated into English. Has anyone posted a translation online? 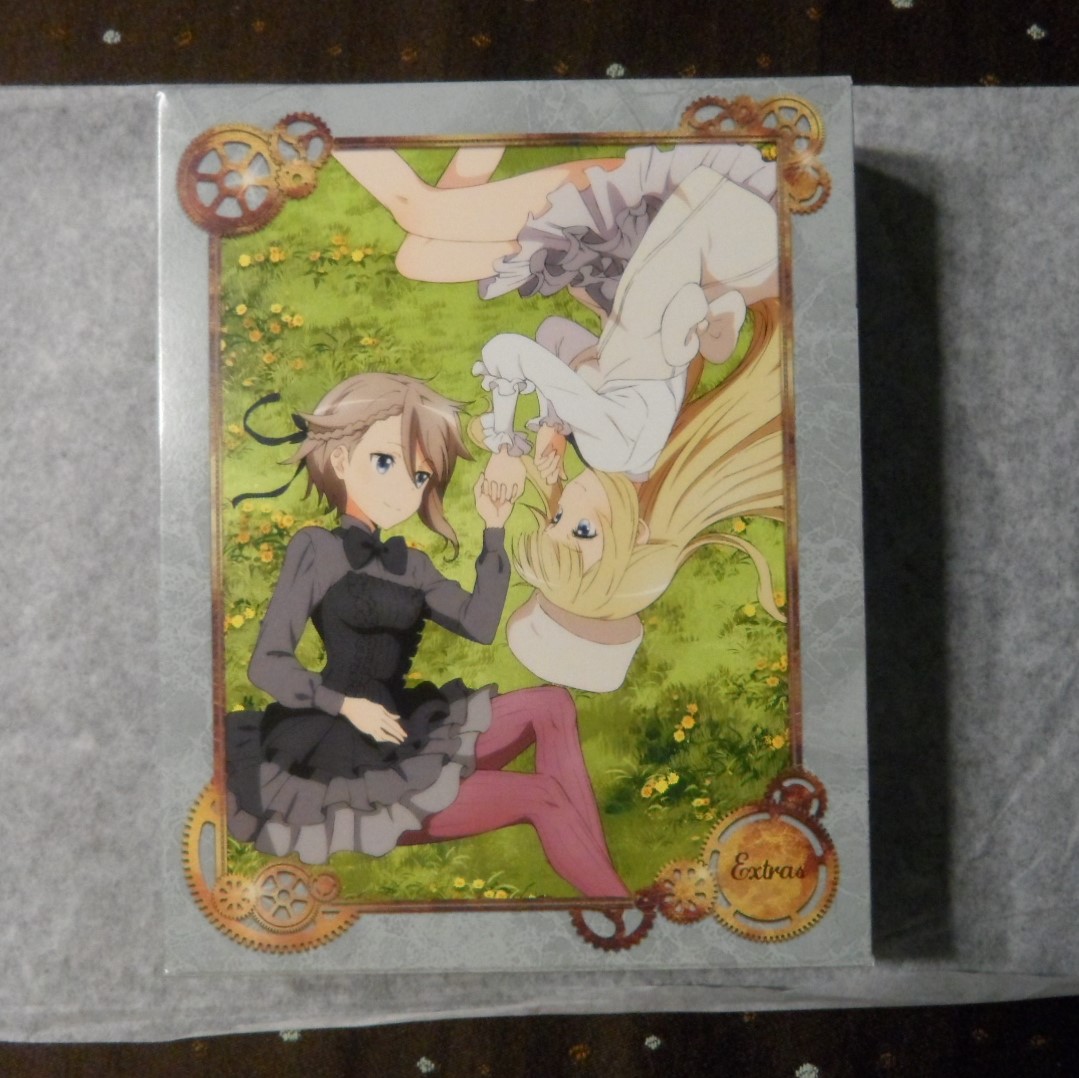 Oddly enough, there’s a box which houses the coaster set and the poster. I guess it’s to make the presentation neater and, well, the box does look nice. I like how the front and back shows Ange and Princess in their child and present-day forms… a bit of spoiler though, ain’t it? 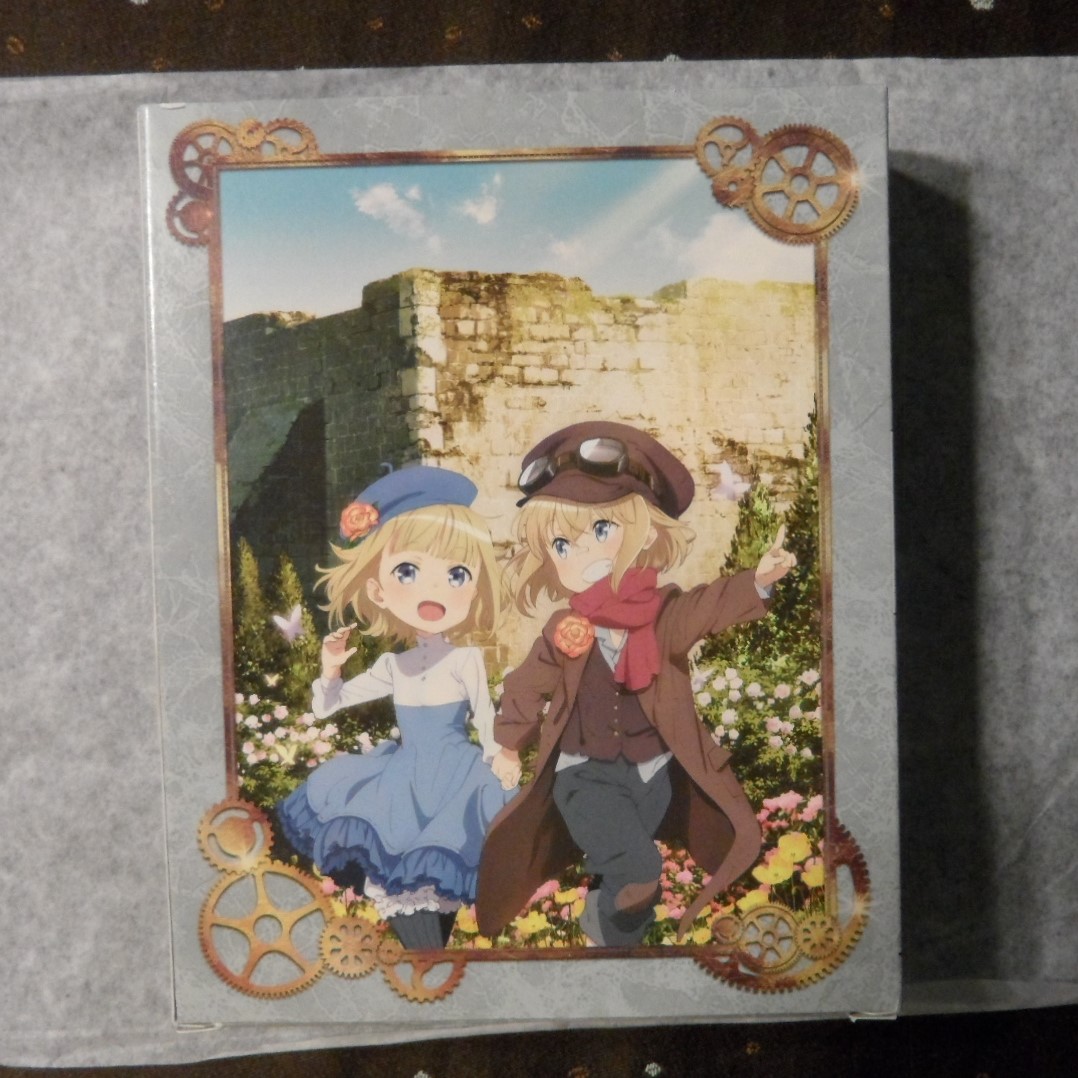 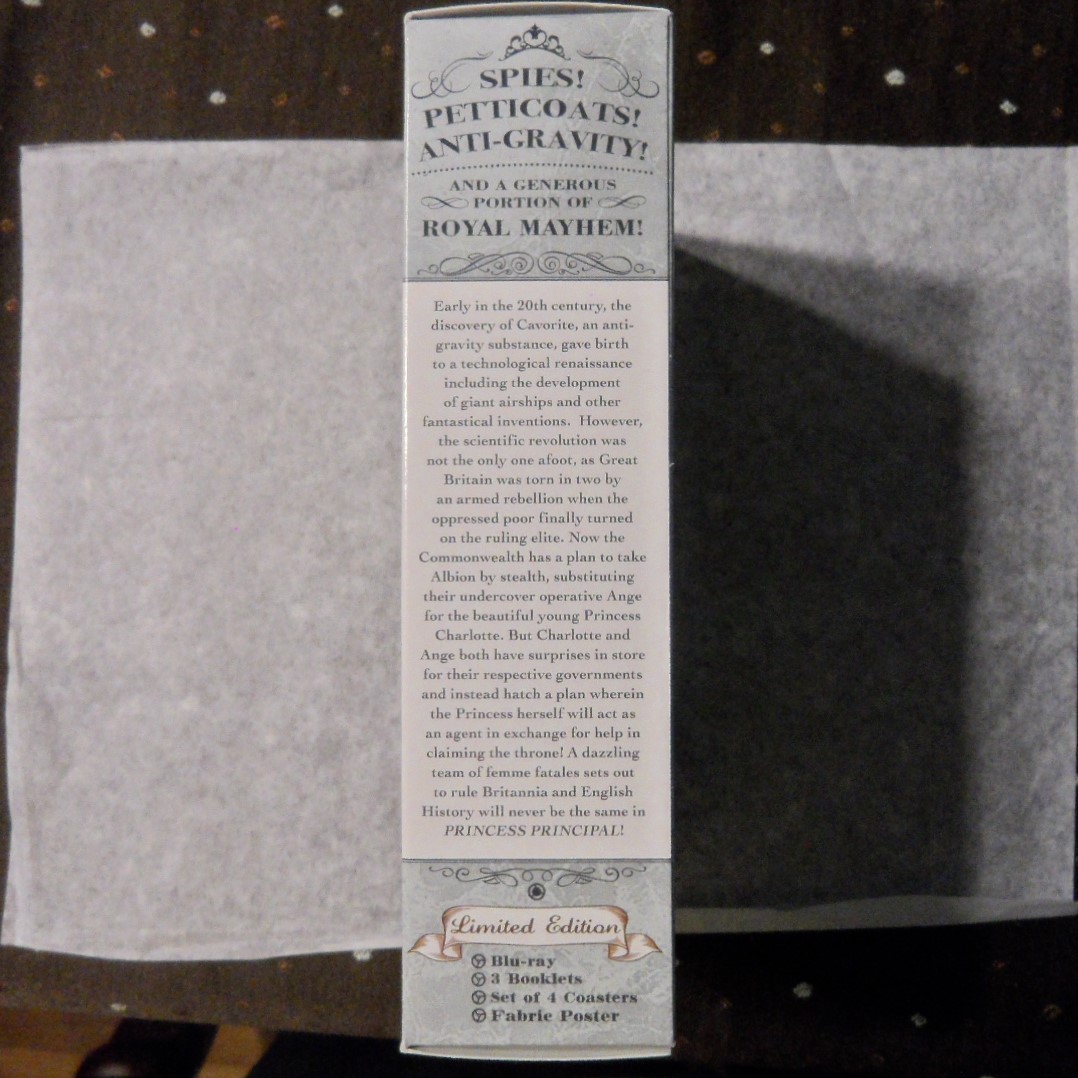 Oh, so that’s where the the product information went. 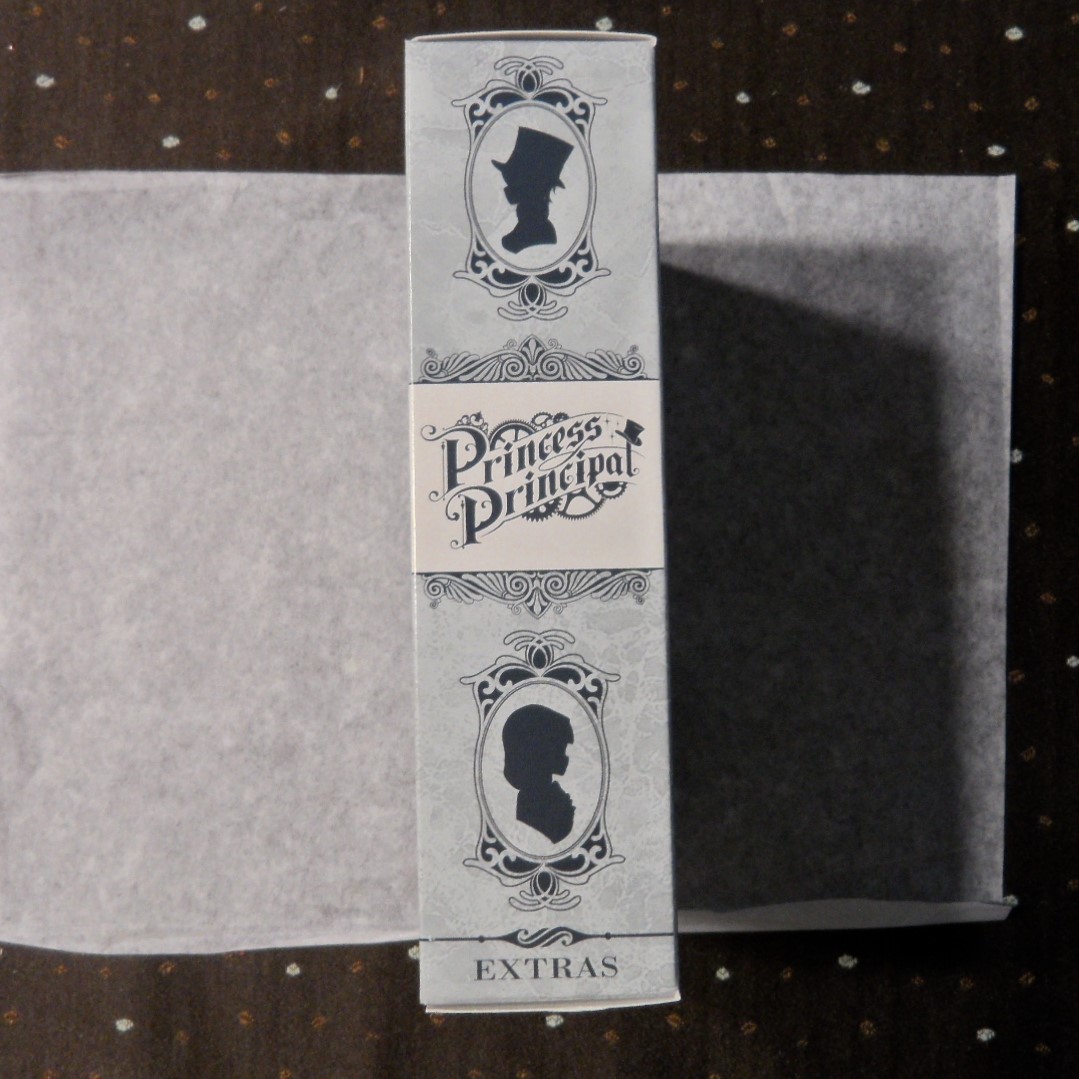 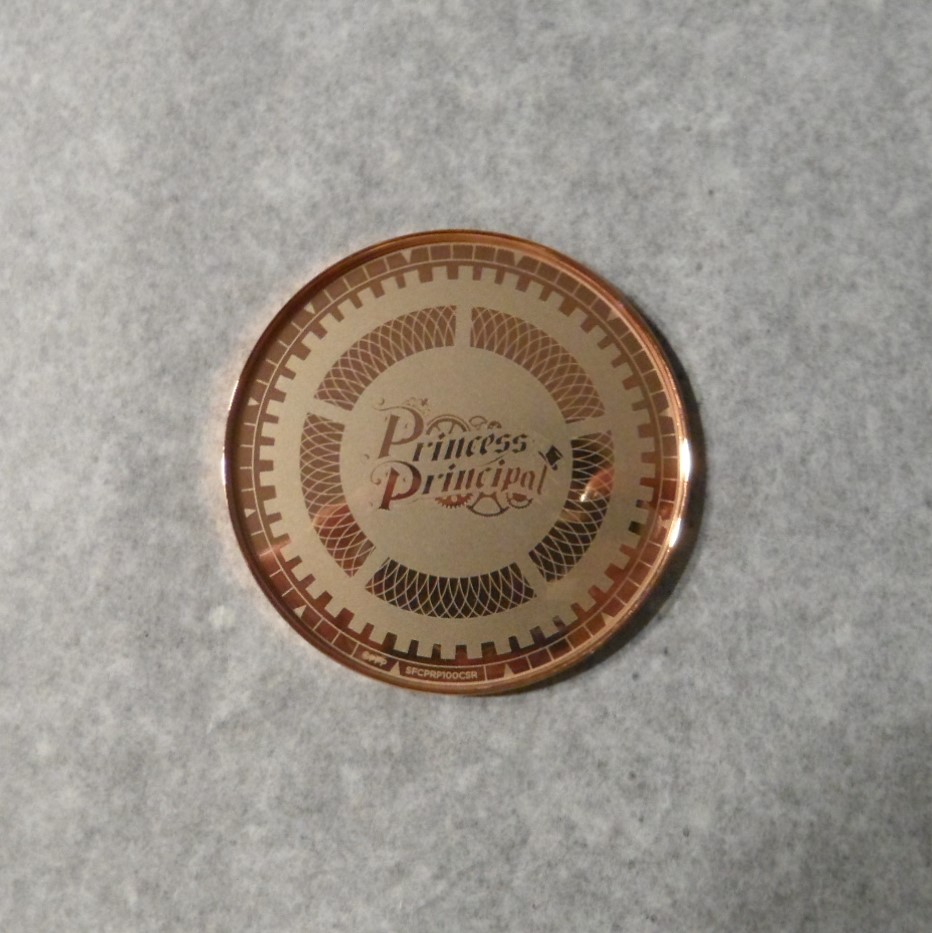 Here’s one of the coasters. I’m only showing one because all four are identical. Apparently, the last production delay for this box set had something to do with the coasters being missing in some copies. Darn things caused so much trouble!

…They do look nice though.

And last but not least: here is the poster. I’m a bit annoyed that it came in the box set all folded up into a square since you now have all these pesky creases everywhere. Still, this poster is a thing of a beauty. The art is the same as the Japanese series Blu-ray box set.