Alright, let’s make this quick because holy shit, Kingdom Hearts III is finally out! Of course, I want to play this ASAP.

It has been a long time coming after all. Personally, I think the impatience expressed by longtime fans was maybe little exaggerated. Yes, Kingdom Hearts II was thirteen years ago but do you have any time how many Kingdom Hearts games released since then? 358/2 Days, Birth by Sleep, Re:Coded, Dream Drop Distance, all those HD compilations. There definitely was not a drought with this series at all. Still, it has been a long time since we got a full fledged title on console and considering that this is the end of the so-called “Dark Seeker Saga”, I’d say Kingdom Hearts III merited a lot of the hype surrounding it.

So here I am with the Deluxe Edition of the game. It’s the PS4 version because pff, why would I get this on the Xbone? I know there’s a bundle from the Square Enix Store that includes this as well as Bring Arts figures of Sora, Goofy, and Donald in their Toy Story outfits but I chose not to buy it. I don’t consider bundles “Collector’s Editions” (I know, I’m weird like that) and I’ve learned from collecting video games that getting the big $200+ boxes of cheap goodies takes up more space than I’d like. I personally prefer these smaller box sets is all. Anyway, this edition includes the game itself, a steelbook case, an art book, and a collectible pin! Let’s take a look, shall we? 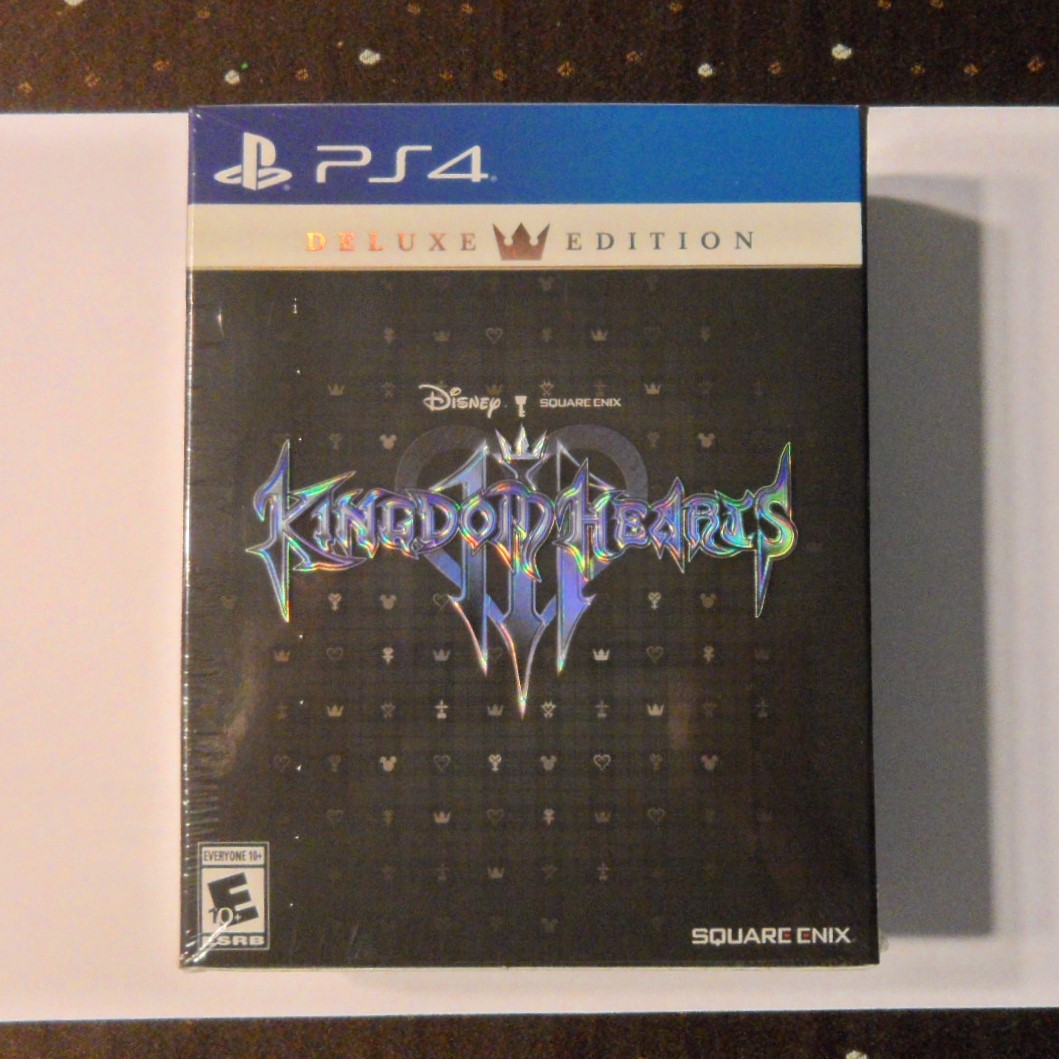 Pretty simple box art though all the recent Kingdom Hearts collector’s edition look like this so it’s no biggie. Besides, the logo for Kingdom Hearts is still one of the best I’ve ever seen for a video game. 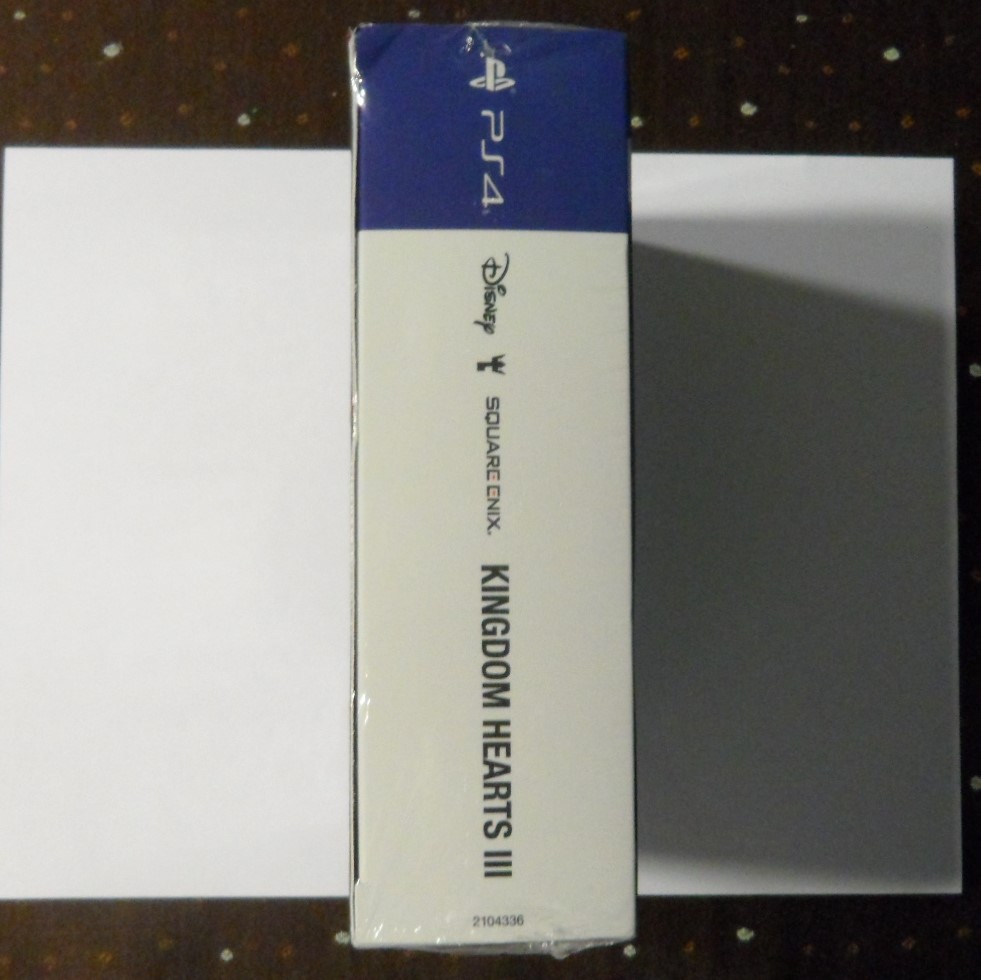 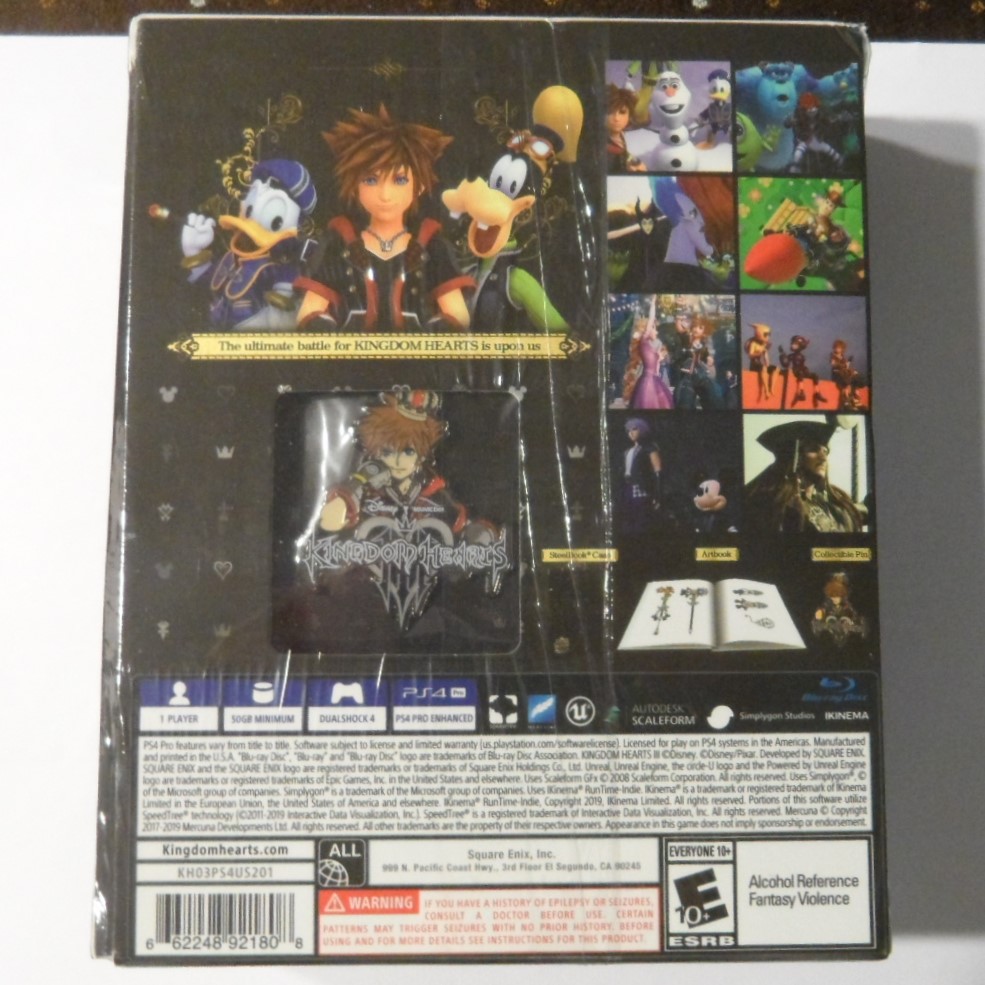 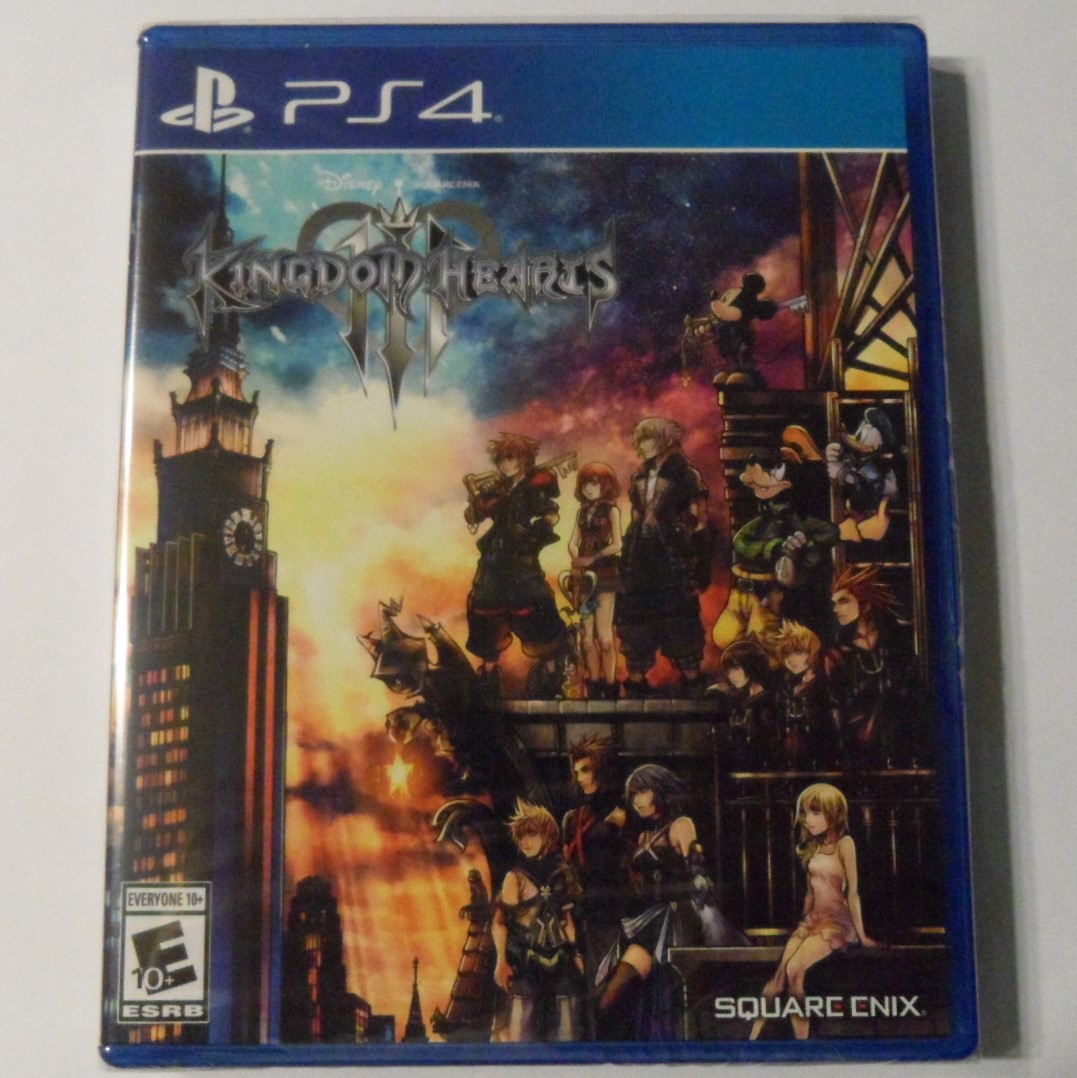 So here’s something neat: the Deluxe Edition comes with both the standard amaray case and the steelbook. That’s nice; I personally prefer it when you get the option to pick which case you want to display on the shelf.

As for the standard box art, it is very lovely. I think Tetsuya Nomura did a great job fitting all the characters on the cover. My favorite is probably still going to be Kingdom Hearts II‘s though.

I don’t know why but I really love that they put Sora, Donald, and Goofy at the top for some reason. It just looks aesthetically pleasing is all. 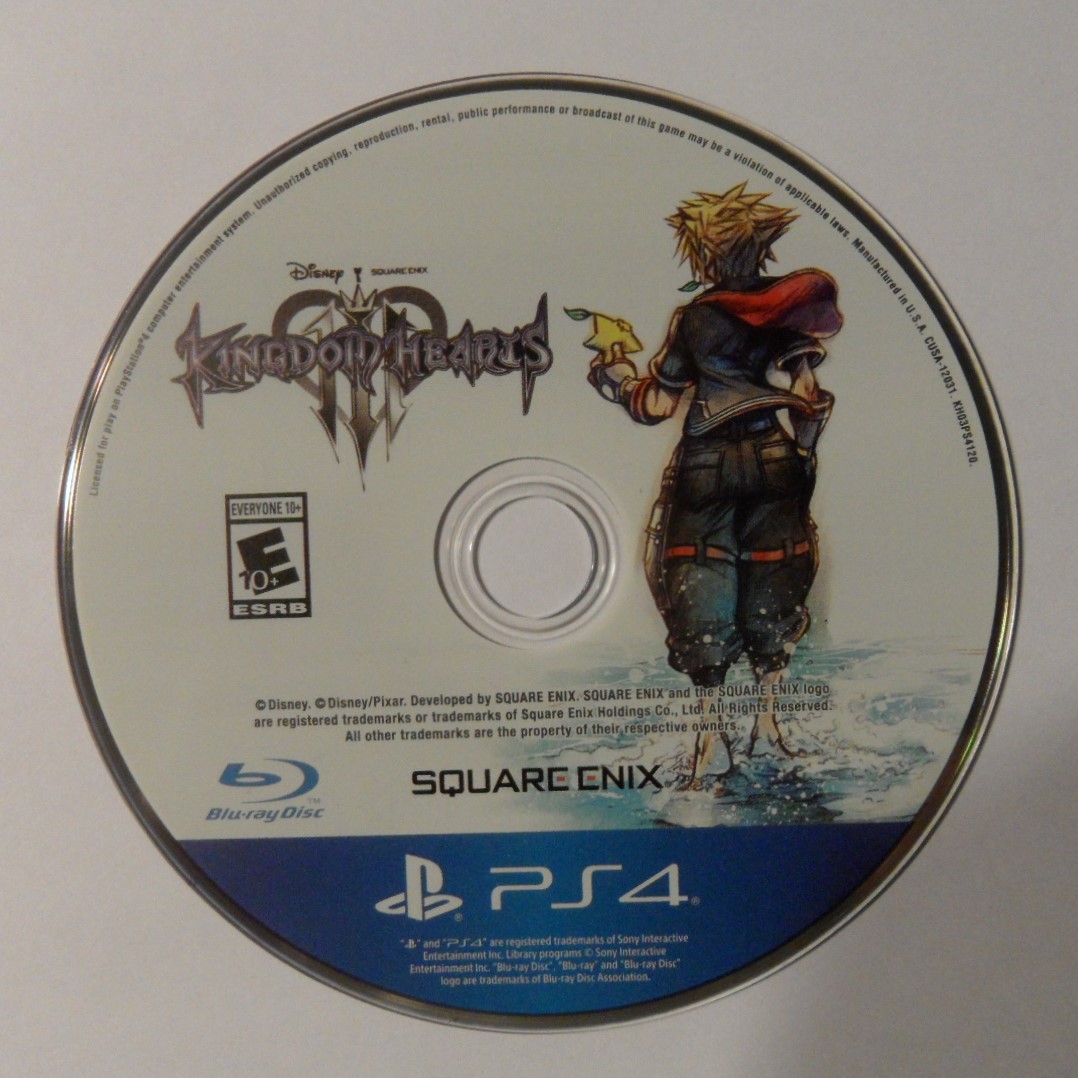 Here’s the disc featuring Sora holding a Paopu fruit. I believe this is the art for the game’s main menu too. 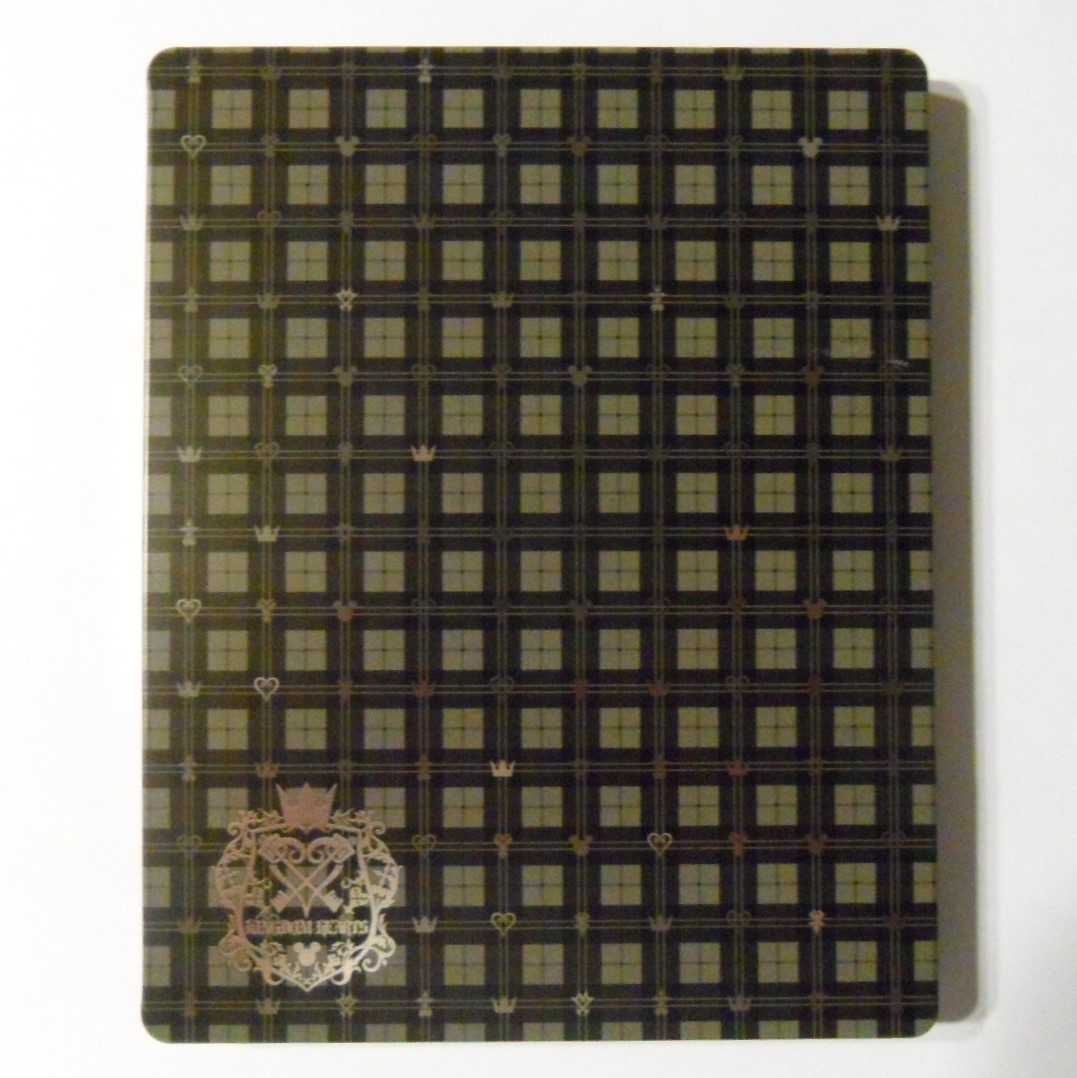 Okay, this steelbook is pretty stinking lame. Call me crazy but this seriously looks like patterns for Kingdom Hearts-themed plaid pajamas. Why, Square Enix? Why?

I’d show the back but it’s the same as the front minus the decal at the bottom left corner. 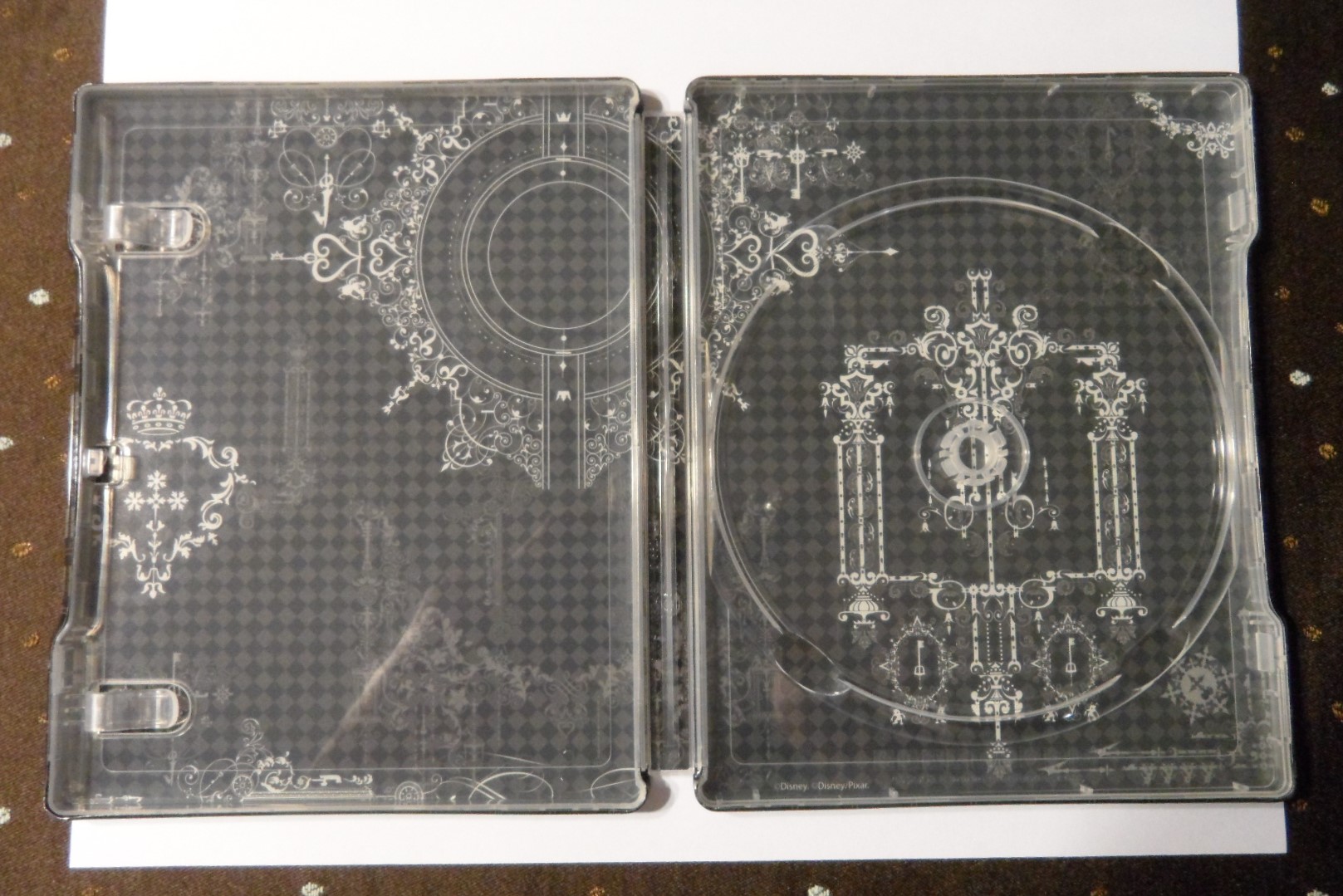 At the very least, the interior looks pretty…not sure what any of this means though. 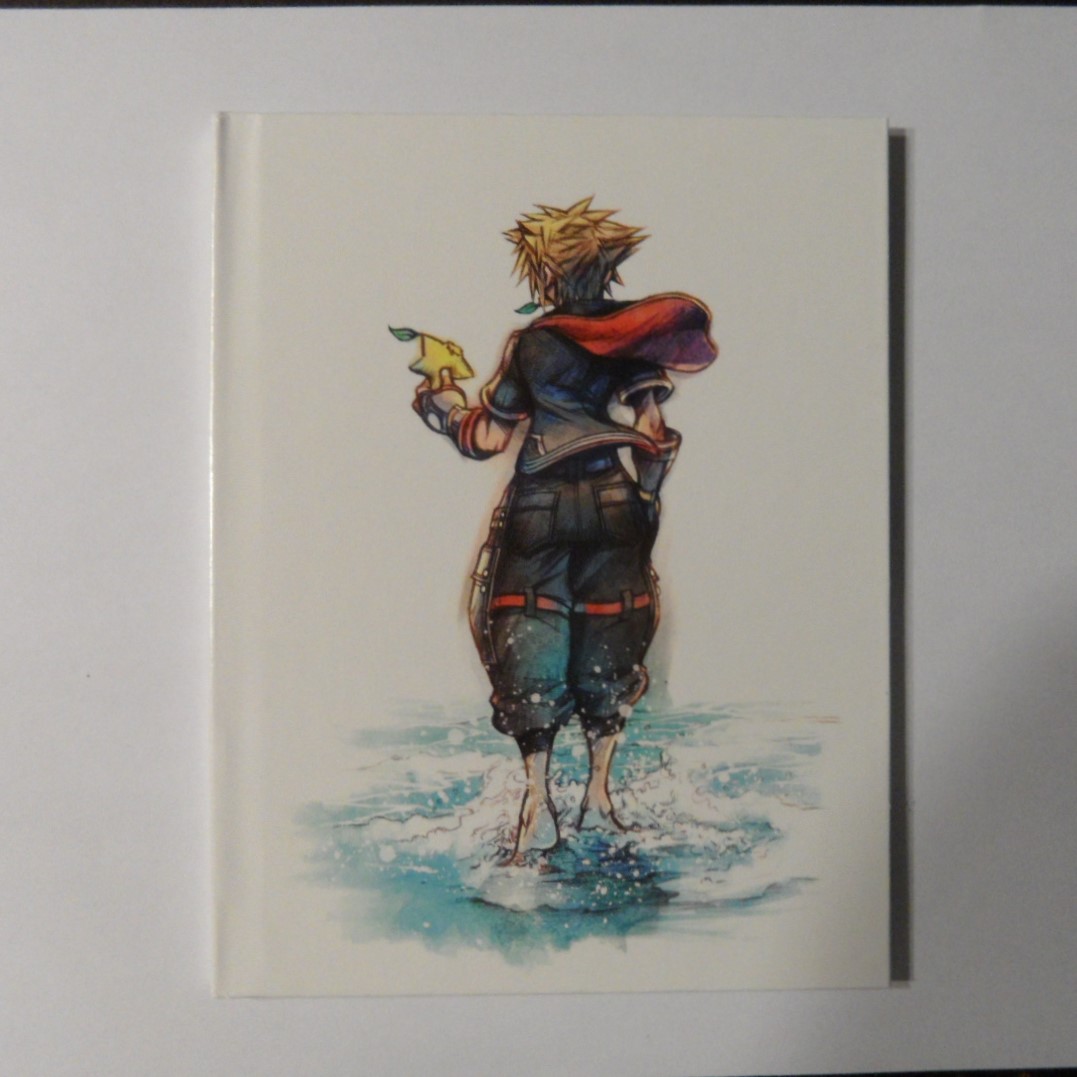 Yes, the front of the art book uses the same art as the disc and the main menu but to be fair, this is the perfect image for an art book. 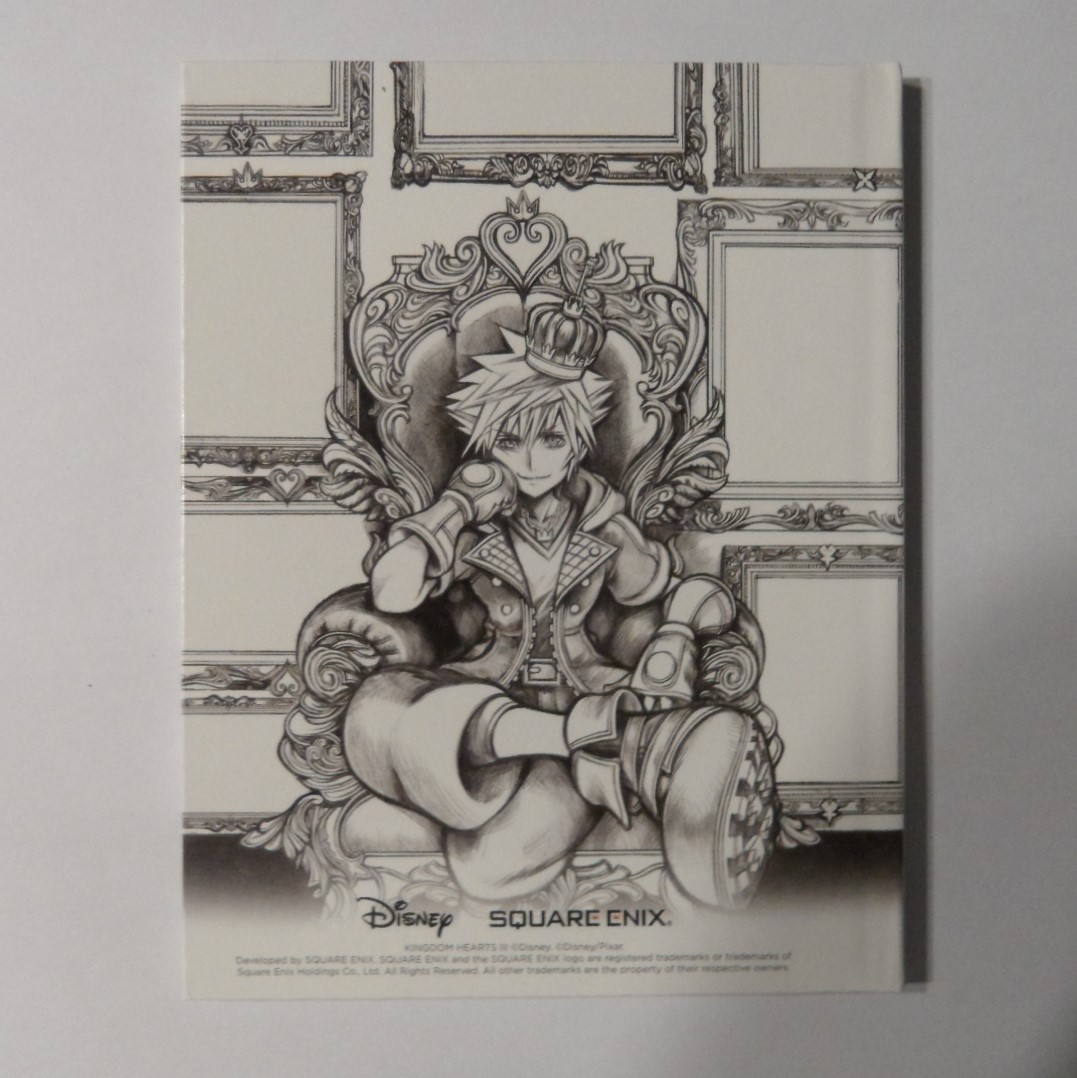 The back, meanwhile, has this terrific pencil sketch of Sora on the throne. That’s a recurring image throughout Kingdom Hearts though it always perplexes me because I’ve yet to see Sora sit on such a nice chair in any of these games. Maybe this game will finally make it happen. 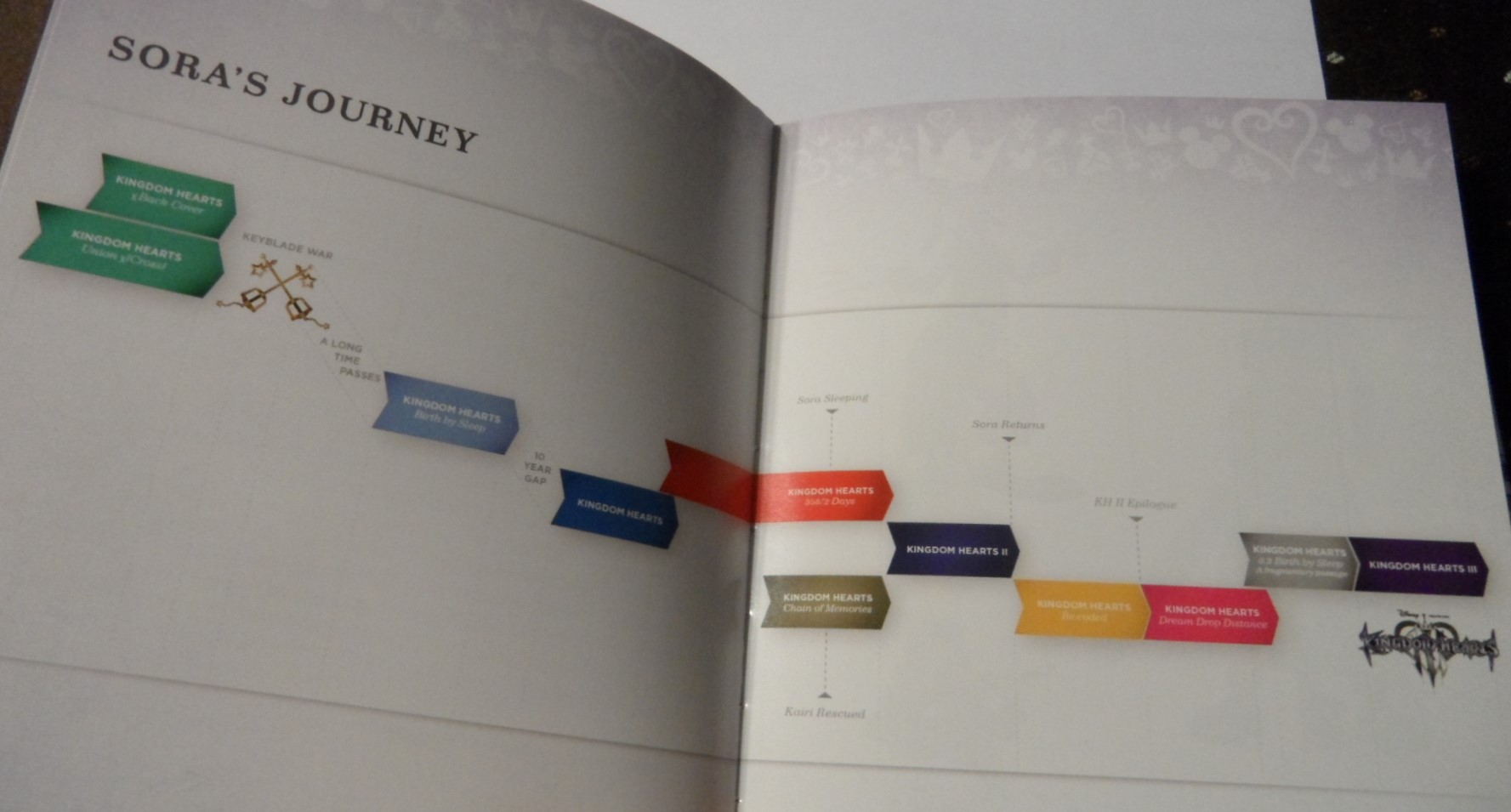 Oh how nice, they included a timeline of this narrative. Lord knows we all need it because my God, this series has gone to all sorts of places. 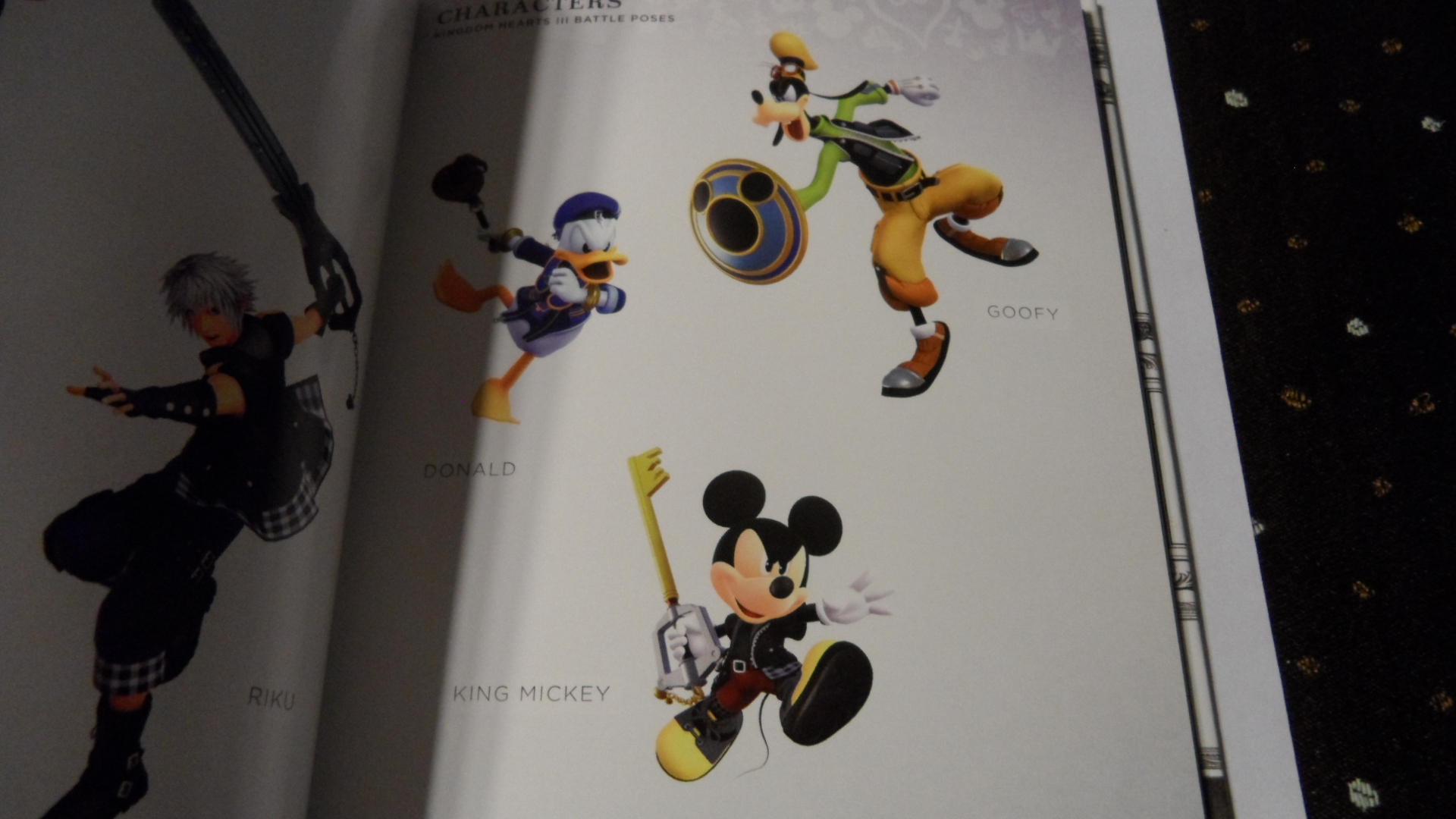 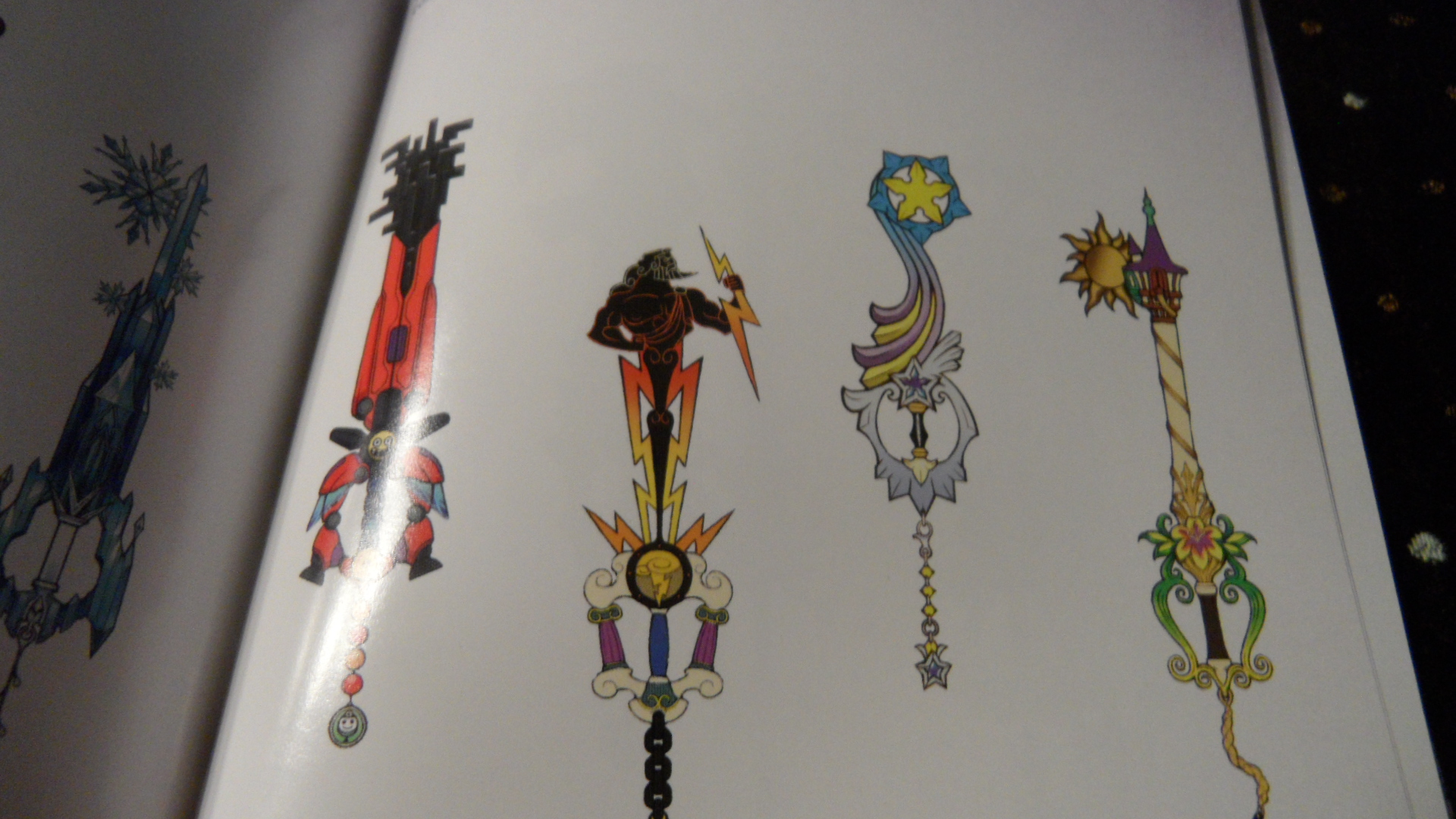 It’s a pretty short art book and unfortunately, a lot of the art is character designs and screenshots that you can easily find online. Frankly, the most appealing parts for me was seeing the concept drawings for all the different Heartless and Keyblades. I wish there was more like that in this art book. 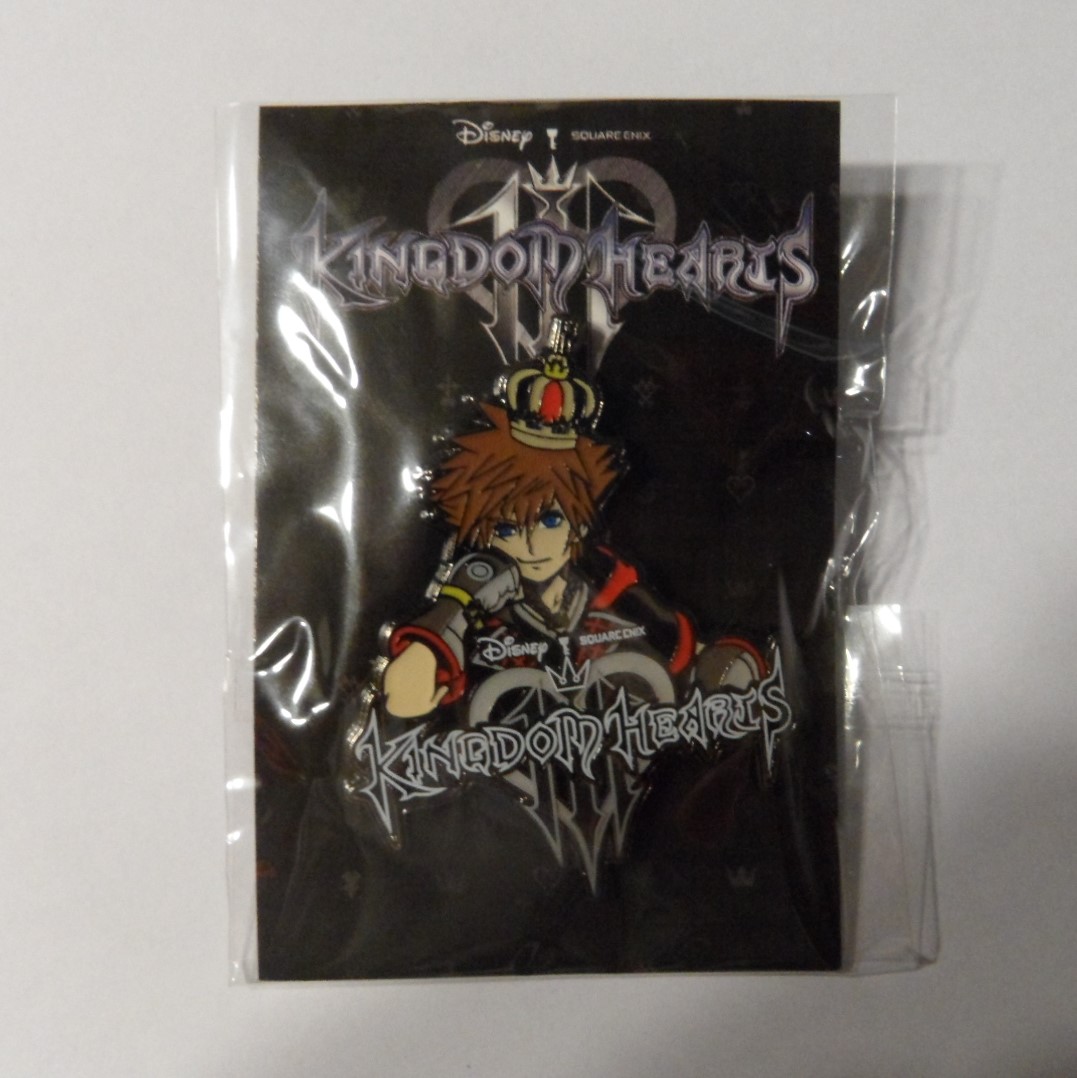 I don’t really care about pins in general but someone at Disney and Square Enix clearly does because every collector’s edition since 2.5 Remix comes with a pin. I like they all include Sora in all his different iterations…but does anyone actually pins these on their wall or something?

And with that, I conclude this unboxing. Now if you excuse me, I’m off to go play this game. I’ll still try to crank out the anime posts but if they ever seem late (well, late even by my standards), I think you can guess why that is the case…