I suppose I could save this for a Lightning Round but I’ve also learned to tackle First Impressions ASAP to avoid feeling overwhelmed from so much watching and writing. 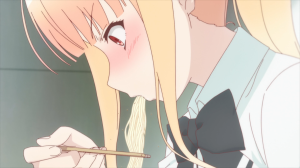 Anyway, Ms. Koizumi Loves Ramen Noodles is a title that very easily speaks for the show itself. There’s a girl named Koizumi-san (Ayana Taketatsu) and she really, really, really loves ramen…..that’s seriously it. Yes, there are other characters but their current contribution to the story so far has been merely existing in their world. I know this is a CGDCT show but this is a pretty non-existent plot even by the genre’s standards.

Isolated from their co-stars, the characters seem fine. I personally quite like Koizumi. Yes, her obsession on ramen is borderline fetishistic but it is a little entertaining seeing her switch from emotionally reserved to being so in love with ramen that she’d probably marry it if she could. Her classmate and the show’s apparent POV character, Yuu Oosawa (Ayane Sakura), is far less interesting but her role is at least justified since you need someone playing the straight man in this kind of story.

Where it gets really problematic is that the chemistry between Koizumi and Yuu is incredibly weak. Koizumi is largely stuck on her own ramen-filled world while Yuu’s attempts “connecting” with her is mostly making observations so that the viewer doesn’t feel disconnected by the former’s presence. It also doesn’t help that Yuu is practically stalking her classmate. She draws a sketch of Koizumi, comments on how cute she is, and follows her in public until she knows her daily routine. As harsh and uncaring Koizumi is to Yuu, I honestly found myself siding with her because anyone would be annoyed with someone being that obsessive and nosy.

With how weak character dynamics are, there’s not much that’s making me want to keep watching Koizumi-san. I suppose the show seems knowledgeable about ramen trivia and looks fine visually but that’s really about it. Unless Winter 2018 is a super dry season or I hear from others that the characters get better with time, I think I’ll pass on this show.