Please excuse the lateness of this post. Life has been very hectic and stressful for me and Anime Boston also took up my time last weekend. 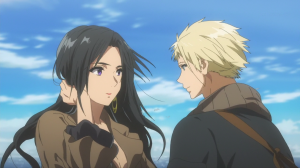 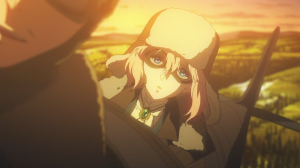 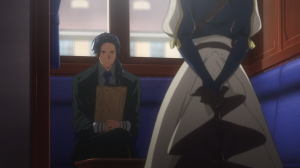 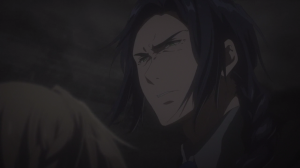 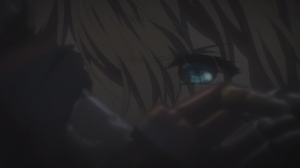 Anyway, this episode of Violet Evergarden seems to be a mishmash of the final few chapters of the light novel. You do have Violet confront Diethard and you do have this train battle in the original text though they actually happened separate from each other. There is also one huge difference but that would actually spoil the light novel itself so perhaps it’s best to save it for another post instead.

On the episode’s own merits, there’s some good ideas going on here but the execution leaves a lot to be desired. Watching war creep back into Violet’s life ought to be interesting (and it was last episode) but the depiction we are presented with here feels too black and white. Violet’s refusal to kill being at odds with Diethard’s perception that she’s a human weapon is fine but the enemy soldiers the two face are so damn cartoonish. Having Violet beat up the same guys who killed Aiden should’ve been satisfying but it honestly felt shallow because those extras are just evil because reasons.

There’s also a couple of other flaws in the script. Benedict and Cattleya are just there to be a reason for Violet to get involved and to counteract Diethard’s insults towards her. To be fair, I can see a Doll acting as an ambassador given their line of work. Cattleya and Violet even helped with a political marriage for peep’s sake. Her and Benedict just sadly have little to do here. There’s also one big plot hole in Violet and Diethard’s argument over the former’s humanity. Violet insists that she doesn’t take orders, even going as far as refuse Diethard’s order to kill the soldiers…but she is technically following Gilbert’s order to live. Admittedly, she has been fulfilling the Major’s wish her own way but I think it still stands that there’s some mixed signals going on here.

For all its problems though, I am glad that the anime finally offered the long awaited confrontation between Violet and Diethard. The latter is one of the more interesting characters in the story — someone who has seen the worst of Violet, only acknowledges her utility, and has a hard time believing in her humanity. I thought it was a clever bit of juxtaposition to have Diethard save Violet just as the latter was about to lose her life and her brooch. For moment, Violet thinks it was Gilbert though it obviously couldn’t be true. Instead, it’s someone who bears a resemblance to the Major; sharing the same green eyes but lacking the kindness that Violet associates with them.

That final shot where Violet deflects an explosive with her hands was pretty awesome too, even if I have to wonder how sturdy those are. Seriously, is her hands made of vibranium of something? Symbolically though, that action does speak greatly of Violet’s nobility and humanity. Her hands are the least human aspect of her being and yet they are what allows her to write the letters that have touched the hearts of so many. Having her use them to save Diethard reinforces that aspect of her character. If you think about it, Violet’s hands are effectively her tools but rather than be used for murder like Diethard had once proposed, Violet uses them to save people.

Will Diethard finally forgive Violet for Gilbert’s death and recognize her as a person? I think Violet has made a compelling enough of a case that she has changed for the better. With only episode to go, the answer will be revealed soon enough.