There sure is a lot of Platelet screentime this time around…10/10. 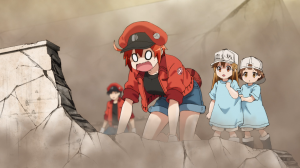 It’s actually been a while since we’ve had a traditional “monster of the week” episode and to be honest, I’m glad we’re back to basics. After the Cancer plot, it seemed like Cells at Work! was a bit aimless. Showing a more earnest look at Red’s job is fine but that T-Cell episode was…well, the staff tried at least. A return to form at this moment is much appreciated. Plus, there’s more Platelet scenes and that’s always a step in the right direction (just give me a Platelet-centric episode already).

This episode does spice up the action by having a returning monster combine with members of the same germ type into becoming a giant version of herself. It actually reminds me of Steven Universe and its concept of fusion in that regard. I also have to admit that this villain is perhaps one of the most dastardly. Not because of the whole beating the White Blood Cells to a pulp and almost winning part though I guess that’s pretty bad. No, rather this villain commits the heinous crime of using a patented Platelet product as a weapon. First, you’re taking over the world and now you’re stealing the work of children? It really shows low people can sink.

The whole bit with Monocyte sure was something. The introduction of the “new” character was awesome, beating up a germ in hand-to-hand combat, stealing White’s thunder, and busting out the deadliest shower head I’ve ever seen. The hazmat suit gimmick is also distinct from what we’ve seen before in Cells. Finding out that the person was Macrophage the whole time, however, is one of the most confusing yet hilarious moments in Cells at Work! to date. I was just as stumped as Red with that revelation and at the same time, my insides were in serious pain from all the laughter I was making.

I guess if I had brushed up more on my biology knowledge, I would’ve seen this twist coming. But come on, the very image of a beautiful maiden secretly prancing around in a hazmat suit as part of her daily work is still really funny. The logistics make it even funnier. How is Macrophage able to fit a dress and a bonnet underneath her hazmat suit? For matter, how can her hair fit too? When she doesn’t need the suit, where does the suit go and how is she able to call upon it again when she needs to make a switch? This somehow stumps me more than the fact that adorable children are designated first responders for ground zero of an explosion. I love that Macrophage doesn’t even a give a straight answer either. For all we know, it’s just some weird hobby of hers.

For an educational anime, Cells at Work! sure raises some strange questions. Then again, the eccentrics are admittedly an appealing part of Cells at Work‘s conceit. Be it things we’ve fully comprehend or mysteries we’re still trying to solve, science is pretty darn strange when you think about it. Just the very idea that we’re composed of trillions of cells seems surreal and fascinating because it’s a fact that you pretty much take for granted. All Cells at Work! does in that case is simply make the science even stranger…and adorable even. And if you ask me, it’s made for some solid entertainment so far.

Watch Cells at Work! on Crunchyroll

Read My Cells at Work! Reviews