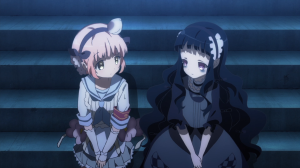 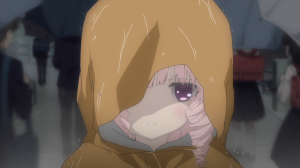 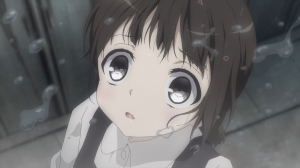 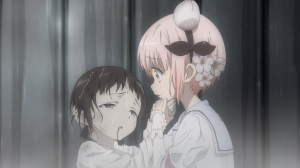 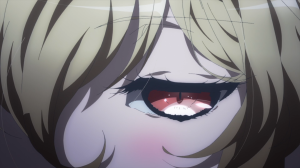 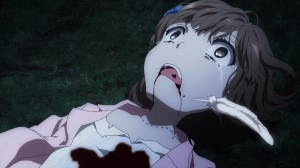 I do have my fair share of nitpicks with this episode. Much like with Top Speed’s background, I think MahouIku has honestly overstepped its boundaries with how dark and edgy it can be. I mean, add “father who killed his wife” to the list that already includes sexual harassment, suicide, and unborn babies. This is getting ridiculous and had it not been for the writing still being good, I’d honestly would think this anime is trying too hard.

There’s also a number of plot conveniences that allow for Alice’s death to happen. I get Snow White’s plummet into despair but that mood swing where she rejects Alice yet again was clearly an excuse to put distance between them and allow their emotional final scene to work better. I also find it annoying that the scripts neglected to inform the viewer that magical girls lose their powers if their cover is blown until  the last minute where it is necessary to do. I’m just saying, it’s better writing to bring that up early and then make it an “oh, shit” moment later. Finally, there is that part where Koyuki was able to hear Alice’s dying thoughts in civilian form. Chalk it up to the power of friendship all you want but it’s a bit contrived in my opinion.

This all aside, Alice’s death still worked really, really overall. I actually needed to pause the episode because it was becoming too much to me. To start off, the way in which Alice dies is really clever. I wasn’t sure how you could give her the axe when she can seemingly survive anything (including a literal axe last episode!). Eliminating her when she’s just Ako really does work around that issue to great effect and you can fear for her life during this bit. Furthermore, it’s very purposeful that Alice’s last moment with Snow White is as Ako and not as Alice. I figured she was a fan of Snow White and knew that she would be the one to encourage her to keep fighting the good fight. Evidently, she just couldn’t find the right words, perhaps because of how reclusive her upbringing has her made. In the end, she still managed to express her gratitude and encouragement but not as some mysterious magical girl but just as a normal girl who truly admired Snow White for what she does and stand for. Despite its occasional clumsiness, there really is something impressive about MahouIku and how it handles some of its death scenes. I could nitpick all I want but in the end, they still gets to me anyway.

Look on the bright side, at least karma strikes later in this episode. I do kind of adore MahouIku‘s pattern of killing off one of the rotten eggs along with the good ones. Be honest, I think we all wanted Minael to die a horrible death after helping Swim Swim kill Alice. Yes, she is coming to terms over Yunael’s death but the way I see it, it was putting her on a very irredeemable path. Even with the flashback (never in this show have I been happy to see one), I still thought this was a brat who needed to put out of her misery. As swift and brutal as Cranberry killing her was, it was honestly erring on the side of satisfaction.

I highly doubt Cranberry will beat Swim Swim. Right now, it seems that MahouIku is gearing for a big showdown between the latter and Ripple and for that to happen, you obviously need Cranberry to lose. Just by process of elimination, Tama seems more likely to get the axe instead of Swim Swim. That said, I do expect this fight to be a good one. My only concern is if we’ll get flashback for Cranberry. I personally have found that not knowing who she truly is has done wonders for her character. I hope there isn’t one but alas, I think this anime is too self-indulgent to express that kind of restraint.

For all of my Episode Reviews for Magical Girl Raising Project, check out the show’s archive page!