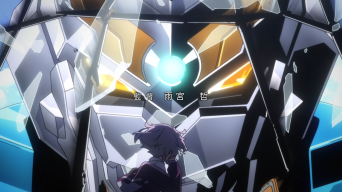 Whew, made it. The past six or so weeks have been a juggling act for the blog but I manage to stay up to date with everything new. The carry-overs (*cough Banana Fish *cough) I’m sadly still behind on but if that’s the only huge screw-up I made, then so be it. On the bright side, my watch list has been finalized so hopefully I can stop being a worrywart, enjoy anime and blogging stress-free and in its fullest, and even get back to some other projects pertaining to the blog.

As for Fall 2018 itself, I’ll admit that this season proved better than I anticipated. Granted, there’s nothing amazing airing right now. I wouldn’t exactly say I’ve found the next Yorimoi or Revue Starlight this season. However, this season does have a fair share of respectably solid or good shows, arguably a bit more than Summer 2018 did. Some of those shows even took me by surprise such as SSSS.Gridman, Goblin Slayer, Rascal Does Not Dream of Bunny Girl Senpai. I didn’t expect to get into any of those shows but the rankings down below clearly show otherwise. All in all, I’d say this season is shaping up to be a respectable end for the year.

With that said, let’s take a look at the Fall 2018 anime themselves.

#1. Iroduku: The World in Colors
Current Score: 8 | Episodes Seen: 6 out 13
Thoughts: I had a tough time deciding a top pick because, as mentioned above, nothing has really stood out to me as amazing so far. Frankly, Iroduku narrowly claimed the spot thanks to its superb visuals. But make no mistake, I am having a great time with this show. I like all the characters, particularly Hitomi and especially Kohaku, and the story has a pleasant, slice of life tone that I dig. I don’t know if this will remain Anime of the Season but I imagine it’ll still be up there.

#2. Rascal Does Not Dream of Bunny Girl Senpai
Current Score: 8 | Episodes Seen: 7 out of 13
Thoughts: When this season started, I never imagined Bunny Girl Senpai to be a mainstay let alone climb this high to #2. But the longer I watch it, the more I realize how much I like and care about its characters. The dialogue is still an acquired taste; I’ll never shrug off how smart this show is trying to be. And yet, in spite of that flaw, the show is still quite smart with solid characterization and creative scenarios that explore the woes of adolescence.

#3. Bloom Into You
Current Score: 8 | Episodes Seen: 6 out of 13
Thoughts: So far, so good. Bloom Into You is definitely playing the slow burn but it’s done a solid job keeping Yuu and Nanami’s relationship compelling. The direction has been terrific and on a technical level, the visuals are really pretty to look at. I am, however, a little worried about some recent developments surrounding Nanami’s character and if not treated carefully, they could undermine the grounded and methodical tone this show started with.

#4. SSSS.Gridman
Current Score: 8 | Episodes Seen: 6 out of 12
Thoughts: I don’t know if all of Trigger’s best people ditched Darling in the FranXX for this or we now live in Earth 2, but the studio has done surprisingly good with SSSS.Gridman. Maybe the show will still jump the same shark Darling did but so far, I’ve been digging the characters, the tokusatsu-inspired action, and the surprisingly methodical pacing.

#5. Goblin Slayer
Current Score: 8 | Episodes Seen: 6 out of 12
Thoughts: Proof that I am a horrible human being. But seriously, the farther I get in Goblin Slayer, the more I think the first episode did it very little favors. Past the rough beginning, I think there’s a lot to like about this show — likable characters, strong set pieces, and a healthy amount of self-aware humor. I won’t necessarily tell people to give this anime a second chance but it does pay to stick with it for a couple of episodes.

#6. Double Decker! Doug & Kirill
Current Score: 7 | Episodes Seen: 8 out of 13
Thoughts: Given that it’s been seven years since Tiger & Bunny, I’m not surprised Double Decker! has gone unnoticed. A shame too as this has been a fun ride in its own right. The comedy can be a little inconsistent but the highs more than make up for its low and it’s hard to deny that it’s developed a strong cast of cool characters. The occasional dips into drama have worked surprisingly well too.

#7. Ms. Vampire who lives in my Neighbhorhood
Current Score: 7 | Episodes Seen: 6 out of 12
Thoughts: Goodness, 2018’s CGDCT anime peaked so darn early with Yorimoi and Laid-Back Camp. Alas, I still watch at least one every season and to be fair, I am indeed enjoying Ms. Vampire. Anything that presents a vampire as an introvert who would rather stay indoor and watch anime  gets my stamp of approval. Some of the vampire-themed jokes have a respectable amount of thought and variety put into them too.

#9. Zombie Land Saga
Current Score: 6 | Episodes Seen: 7 out of 12
Thoughts: Frankly, this has lost a considerable amount of insanity. Some absurdism still creeps in once and a while but past the zombie gimmick, Zombie Land Saga has largely been playing the idol plot completely straight, let alone marry the two aspects together with synergy. Still, would it kill someone (pun not intended) to put more effort in the dance choreography and insert songs?

#10. Skull-face Bookseller Honda-san
Current Score: 6 | Episodes Seen: 6 out of 12
Thoughts: I’m under the impression Honda-san being a skeleton has no punchline and is just there as an initial hook. And hey, it did work at least for me. This show can be pretty darn funny with its bookstore antics and Honda-san’s social awkwardness when dealing with crazy customers.  That the show runs at half-length certainly helps the experience from getting tiresome.

#11. Tsurune
Current Score: 6 | Episodes Seen: 4
Thoughts: Loyalty to KyoAni dies hard so I’m giving Tsurune a two or so more episodes than I normally would with this kind of show. I find most of the boys annoying and all the girls horribly underused but there’s a strong student mentor dynamic going on between Minato and Takagawa. Also, while not up to par with Violet Evergarden, the visuals are still quite gorgeous.

#12. The Girl in Twilight
Current Score: 6 | Episodes Seen: 7 out of 12
Thoughts: You could literally track my enjoyment of The Girl in Twilight on a line graph. I really enjoy the parallel dimensions and the hijinks that ensue but the character development can feel rushed at times and as soon as everyone turn into magical girls, I lose it. I could maybe appreciate the action for the flash but the CGI used is really distracting and the designs for the magical girl outfits have so far been godawful.

Bold = Didn’t Scribble About It

Add on Banana Fish (which I’m still trying to catch up on) and the total is actually six. Add in…whatever is in my backlog and the number is probably a little bit higher…

How has the Fall 2018 anime season been going for you? Any favorites? Any surprises? Think I should give something a second chance? Let me know in the comments below!