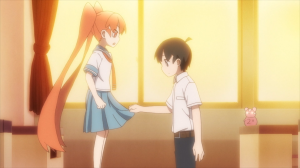 For the past two seasons, I’ve been grouping my First Impressions of all the short anime in a Lightning Round post. That approach worked just fine for me and I was thinking of doing it again for Winter 2019. But here’s the thing: there’s barely any shorts premiering this season and as far as I can tell, How clumsy you are, Miss Ueno is looking to be only one from the small well to get simulcasted. Maybe some announcements will prove me wrong but right now, I should just make do with what’s presented to me.

Onto the anime itself. True to the title, the titular protagonist, Ueno (Yuu Serizawa), is clumsy in how she she struggles to admit her crush to her incredibly dense classmate, Tanaka (Aimi Tanaka). That’s a fine hook and all but evidently, the creator of this story somehow thought it’d be better to perv it the hell up. Right at the start of the premiere, Ueno claims that she’s filtered her urine into clear water (I say “claim” because I don’t think filters work like that) and tries to make Tanaka drink it. Then she uses some sort of projector to conceal the interior of her skirt and makes Tanaka participate in an experiment where she flashes him. Oh, I should probably mention that these characters are all middle schoolers…so there’s that too.

Mileage might vary here. Maybe you’ll laugh at the absurdities, maybe you’ll be turned off by them immediately. Comedy is subjective after all. Me personally, I just find Miss Ueno‘s execution to be one-note. Ueno incorporates some rather kinky stuff and hijinks ensues but that’s really kind of it. I suppose the potential lies more in Tanaka’s dense personality reacting to all this but I haven’t found it terribly effective. He reacts at Ueno’s filtered pee with disgust and refusal but it doesn’t really elicit a laugh as his attitude doesn’t directly stem to him being dense. I’m pretty sure plenty, if not most people, are generally not interested in drinking their friend’s piss. Then there’s the whole skirt skit. Him nonchalantly recording “data” for the experiment and not caring if Ueno is wearing panties or not is kind of funny. But after that, he does want to know what’s underneath her skirt and turns off her device as, apparently, he doesn’t know what kind of private parts girls have. One, this scene could come across as rather uncomfortable for some. And two, Tanaka seriously hasn’t gone to sex ed class? At that point, the joke is trying too hard.

As of writing this post, we’re pretty early in the season but to be honest, I don’t have much of a desire to watch more of How clumsy you are, Miss Ueno. The premiere does do its job in setting the tone and comedic routine the whole series appears to desire but it just feels too one-note to garner an entire season’s worth of attention. 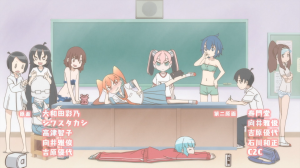