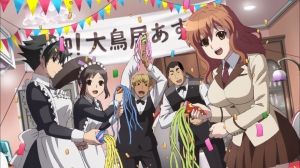 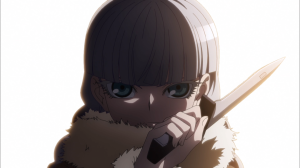 No joke, I genuinely thought I stumbled upon a recap episode by accident when I started watching. In my defense, it was early in the morning and I was still groggy at the time. That said, was there any reason to show two minutes of recycled clips at the beginning? Asuka joining M-Squad wasn’t that long ago. My best guess is that some crunch time happened at the studio and the brief clip show is done for padding. If that is the case then that’s pretty unfortunate.

It does say something about a dark magical girl anime if its most consistent success is in its moments of levity but screw it, I’ll take it. M-Squad throwing a welcome party for Asuka? That was fun, simple as that. The bit that most of the party food are expired military rations is especially humorous. It’s made even better by the fact that everyone is ecstatic when Asuka enjoys the food, acting as if thy cooked some fancy meal for her when they very clearly didn’t. You do have to wonder though why no one didn’t just go to a local bakery and buy a cake. Was the whole budget wasted on the maid cafe? …Do they not actually serve customers and make money at said maid cafe?

Also, while I appreciate the time spent in getting to know M-Squad, am I only the one who finds it baffling that Kaede and Shima, the ladies of the team, are just sports champions? Shouldn’t a special ops team tasked with suppressing magical threats have looked for, you know, people with prior military experience?

The celebration doesn’t last for long as Asuka soon receives her first assignment with the rest of the team. There are some aspects pertaining to this set piece that do sound great on paper. One, securing a newly formed dimensional bridge between our world and the Disas’ feels routine, something the military would always been on the lookout for and have prepared strategies in the event that they appear. And two, to give credit where it’s due, this scene gives a better impression of how M-Squad operates — covertly taking out the small fry so that the magical girls can prioritize their efforts against the high-value targets. It at least looks smarter than firing out in an open street which, need I remind you, was against a Disas monster.

That said, I still found myself zoning out due to the villains of the week. They’re all just mercenaries procuring magical items because money. It’s as bland as you can get. And no, throwing in a cute girl into their ranks doesn’t assuage the problem. At least with this episode, there’s not much go off with Nazani’s character apart from she’s a bad girl for the sake of it. I will admit that the existence of a wannabe magical girl is a great concept…except for the fact that we’ve already seen illegal magical girls at this point so why even bother establishing that there’s imitators?

As per usual, Asuka’s PTSD still remains the best part of Spec-Ops. It’s not far-fetched for Asuka to freeze up when she hears Shima has been injured. The very moment forces her to recall her failure to keep all her fellow magical girls alive after succeeding Francine as a leader. Admittedly, you could wonder why this kind of shutdown has never happened before in this show. When Kurumi tried to fight a Halloween-class monster alone or when Nozomi got kidnapped and tortured, was Asuka not that deeply afraid that they could die by the time she reaches them? Then again, the mind works in all sorts of ways. To play devil’s advocate, it’s maybe more the context and less her ties to people in general that caused her to freeze while fighting Nazani.

Now about the real star of this episode, Tamara (M.A.O.).

I confess that I really enjoyed this character after just one episode. Every member of the Legendary Five shown so far are tough as nails but Tamara particularly expresses the sense that she is a soldier the most. She’s disciplined, she’s no-nonsense, and she’s clearly put a lot thought into her battle tactics. And not going to lie, her Magical Girl outfit is terrific, especially because, for once, it actually looks militaristic. I suppose the giant flamethrower she wields is a bit goofy but I’m kind of okay with it. Maybe this is giving Spec-Ops too much credit but considering the extensive use flamethrowers had in the World Wars, something about a magical girl using a magically enhanced one during another global conflict feels fitting.

Something I noticed during Tamara’s scenes is the repeated mention of her sister. At first, I just assumed she has a sister in Russia and that nation’s government is using that person as leverage to make Tamara do their bidding. Upon double checking though, I can’t help but wonder if Tamara is actually referring to Asuka. In one scene, she reminisces about Asuka right after the first mention of a sister. When she confronts the mercenary leader, she says she’ll give his magical items to her sister as a present. Unless her hypothetical sister in Russia really loves dangerous and illegal trinkets, it makes much more sense that Tamara is referring to Asuka. And yes, one is Japanese and the other is Russian but maybe there’s mixed heritage or maybe Tamara simply feels that close to Asuka. You certainly can buy the latter possibility thanks to a flashback scene that shows Tamara helping Asuka get her act together during the final battle of the war.

A shame then that you don’t get to see Tamara reunite with Asuka in this episode. This is even in spite of the fact that they are assigned to hunt the same targets. I’m hoping a reunion will happen soon as I’d like to see this supposed sisterly bond elaborated further. And assuming Mia is still in Japan, then Spec-Ops is getting very close getting the gang all back together. Let’s just hope it’s not saving it for the finale. In the meantime, can we still have more scenes with Tamara? Please and thank you.