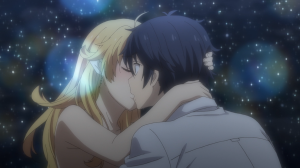 I did see YU-NO: A Girl Who Chants Love at the Bound of this World (that title…) on the seasonal charts but I didn’t pay much attention to it. Little did I know, this is actually based on a visual novel, one dating back to 1996 and has spawned a cult following, a four-episode OVA, and a recent remake for current platforms. To see this adapted for TV in 2019 is admittedly pretty noteworthy.

That said, I’m not actually sold on the show just yet. If you’ve seen anime based on visual novels, then this premiere will feel extremely familiar to you. Male player character lives his life as usual, bumping into all of his possible love interests, and a few glimpses are the real plot occur every once in a while. There absolutely have been visual novel adaptations that has pulled this routine with grace but in YU-NO‘s case, I find it so pedestrian and even kind of boring.

The only character that really stands out is the protagonist, Takuya (Yuu Hayashi) though not necessarily for the right reasons. This guy sure is a pervert. He hits on his teacher, he jokes to a classmate if she’s on her period, he even greets a transfer student in his stinking boxers. It’s not even just whenever he’s around women either. There’s a scene where he gets mail and his very first assumption is that he got finally got a new eroge. I don’t necessarily find all this uncomfortable but I certainly didn’t laugh either. Aside from the fact that this is all the comedy this show seems to offer, these scenes just  happen with no real follow-up. For example, you don’t see him get sent to the principal’s office for taking off his clothes and that’s assuming he even got sent at all. Maybe if Takuya got reprimanded in exaggerated fashion, it could be funny but there is no cause and effect at play here and so these jokes fall flat.

I wish I could say a whole lot about the ladies in this show but their appearances are pretty brief so until further notice, they’re just archetypes. One of them is even your stock tsundere character and the other is the mysterious transfer student. Frankly, what really stood out to me about this roster is that a lot of them are actually older than Takuya. There’s Takuya’s homeroom teacher (who, might I add, is seriously pushing the dress code), a reporter, a school secretary, and Takuya’s own stepmother. It would be weird if these aforementioned characters are all love interests (especially that last one) but seeing as how I just finished Domestic Girlfriend, my mind can only assume that a lot of ships are set to sail.

What the actual plot is does make for a decent hook. Following the apparent death of his father, Takuya receives a mysterious object and with it, he can travel to parallel dimensions. It almost come across as a pre-cursor to the premise of Steins;Gate and it could be amusingly meta to see characters’ routes actually distinguished as their own dimension. There’s also the sudden introduction of an elf girl who presumably jumps to Takuya’s dimension and proceeds to kiss him. It’s a little random, not to mention, the girl is just naked because why not, but I imagine these two have a special and important connection with one another.

I’ve learned from experience that even the best visual novel-based anime don’t hook you in from the get go and they can be a slow burn. YU-NO doesn’t provide the best premiere but things could very well improve from there over time. With that in mind, it would be safer to continue watching before coming to a final decision. That said, it also wouldn’t surprise me if this anime ends up becoming a drop from the watch list.

OP: “Kono Yo no Hate de Koi wo Utau Shoujo” by Asaka

Watch YU-NO: A Girl Who Chants Love at the Bound of this World on Funimation

Read My Other Spring 2019 First Impressions