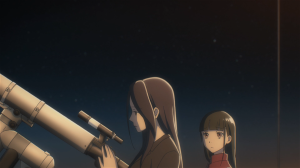 Very slowly, the story of A Place Further than the Universe is meeting up with the one teased in its OP. Of course, being the slow burn that it is, we can’t get to all the promising stuff just yet. All those charming shots of the girls having fun on the ship? Wait until next episode, I suppose. Still, while the ship might not have left the port, the story continues to be riveting anyway.

This episode ultimately fares more on the dramatic side of things though I must quickly say that the comedy continues to enchant me. This quartet is simply too entertaining together. That recurring joke where they can’t decide on where certain areas of the ship are was just great. I especially lost it when they donned ski masks for their little “stakeout”. Honestly, I’m surprised they didn’t get caught throughout that whole scene. You also get to see more of the girls filming stuff for their online show. Shirase particularly shines here because of how badly she’s able to project herself on camera. No wonder everyone else booted her off. That said, I’m a little confused as to how they’ll be able to release the show to the web. If they don’t have internet at Antarctica, are they expected to release all this footage after the expedition?

Oh well, let’s talk about the drama here. One thing this episode has made a lot more apparent than ever before is how the odds are stacked against the expedition. Truth be told, I was originally unsure just how big of a part this plot detail has in the grand scheme of things. It was certainly brought up before and has warranted skepticism from the main characters but it never really felt like a concrete obstacle here. Frankly, I think it’s really just one of the many contributors to the test of resolve that these girls have been facing. Still, I have to admit that seeing sure is believing. Whether it’s manpower, resources, or money, there’s clearly not a whole lot of luxury here and I can’t blame the girls for feeling a little disheartened from it all. It’s certainly a big red flag that they have to go to the local mall to buy groceries for the crew.

I’m admittedly a bit concerned about the sudden expansion in the roster here. Perhaps it was inevitable but with only six episodes left in the story, I can’t imagine we’ll really get to know these people that well, That said, the collective mindset surrounding this expedition is quite interesting. No doubt, it seems everyone’s still horribly reminded of the disappearance of Shirase’s mother, Takako, and how that led to the first foray into Antarctica fall apart. The fear that failure could happen a second time weighs heavily in their minds. You can tell when the main characters survey the crowd at the end of the episode. Still, I think Gin gave a great explanation to Shirase on why everyone’s so determined to go again. Perhaps they’re being foolish here but the dream that Takako had was a beautiful one and they want to see it come to a proper end rather die a miserable death.

Maybe it’s a godsend that this crew has some teenagers on board. The girls clearly are smart enough to tell that there are obstacles to face but they press on because they’ve made it this far and they want to see Antarctica. That kind of youthful and aspiring motivation can certainly help off set the weariness and skepticism of adulthood.

Of the four girls, Shirase probably feels the gravity of her role the most. Not only does she realize her determination could help boost morale, there’s the added weight to the fact that she is Takako’s daughter. In a way, Shirase has the opportunity to not only see her mother’s dream fully realized but to also make up for the trouble her mother caused years ago. That clumsy yet encouraging speech where she describes the South Pole as a treasure chest she’ll one day open really shows that her presence is needed and welcomed here.

You know, I originally thought the title, “A Place further than the Universe” was silly but this far in, I feel that it’s actually an apt description of Antarctica. We all know it exists in our own planet and yet getting there seems so difficult and daunting that it might as well be farther than the universe. And for the people that we’ve seen in this show, it’s no wonder that they want to make it there. Perhaps they all are crazy but you can’t deny that the determination is there and chances are, they will see this dream come true no matter what.

Watch A Place Further than the Universe on Crunchyroll.

Read My A Place Further than the Universe Reviews