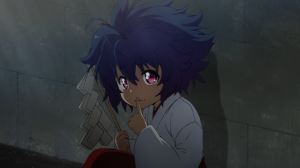 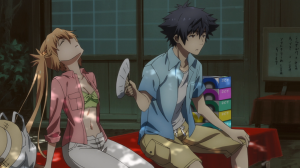 I wasn’t sure what to make of Island last week and this episode wasn’t helping either. Not that I disliked it or anything but it sure threw some more strange stuff at me. And here I thought it only involved time traveling…

There’s apparently a big myth surrounding the island and its three major families that each heroine is a part of. Two siblings, Rinne and Setsuna began a romantic relationship and out of jealously, their friend Karen had a priest named Sara curse Rinne into becoming a monster. Rinne commits suicide out of disgust towards her new form and Setsuna has Sara freeze him so that he can one day awaken and reunite with Rinne’s next life. To be honest, it’s a little confusing but that’s more or less the gist of it.

I find the fact that the characters in the legend have the same name as the characters we’re following in this story awfully clumsy. It is explained that our heroines got those names as per a family tradition but to me, it’s a cheap tactic to make you connect the dots more easily. Setsuna’s arrival, Rinne’s “condition”, and Sara’s role as a shrine maiden all draw parallels to the myth and chances are that the relationship chart will evolve in a similar fashion. I guess it’s an obvious inference to make but even then, I don’t think Island needs to make it even more obvious. Even more questionable is the implied incest surrounding Rinne and Setsuna. If the ones we’re following are the same as the ones in the legend, then this romance just got a whole lot creepier. I don’t care if you reveal that Rinne is a reincarnation of her ancestor, I can’t invest in this relationship with something that weird looming over it.

Another thing I want to address is Rinne’s aversion to sunlight. Turns out that this is a common condition for the Island’s population called Soot Blight Syndrome. At first, I thought Rinne was making it up but later in the episode, you do see an extra collapse from too much direct contact with sunlight. At the point, I was willing to buy into it but then Island decided to complicate things anyway by having Rinne’s mother reveal that her daughter is actually just imagining her diagnosis. The implication is that it’s related to her memory loss from time traveling but even after Setsuna confronts Rinne about it, she still buys into her lie because she wants to uphold the status quo between her and Setsuna since it alludes to the myth. I don’t know, it’s confusing to be honest. Frankly, I wish Island just kept things simple and blamed it on its fictional disease.

I don’t want to be too harsh on this episode. There are a couple of good character bits here and there. Karen’s gotten a little more interesting as we learn more about why she wants to leave the Island and becomes a house servant for Rinne. Her scenes with Setsuna scream tsundere to me but it’s mildly fun seeing the two perform errands together. That whole scene where Sara is trying to get “intimate” with Setsuna was really weird but I like how she acts as guide for Setsuna, giving him some much needed information about the island. And my thoughts on the lore aside, I think there’s genuine weight to Rinne’s more dramatic moments and I still want to learn more about this character.

Island remains an uncertainty for me but it’s not entirely awful and it’s still interesting so I’ll stick with the three episode rule. Hopefully, this anime will shape up by then.

Not going to lie, this is a pretty great ED. Seeing Rinne embark on her own adventure is cute and the animation and editing is all around fantastic. I also really dig the song sung by ASAKA; maybe not up to par with “Shiny Days” but it’ll definitely stay in my head for a long time.

Island is officially available on Crunchyroll.