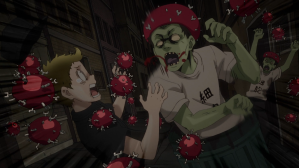 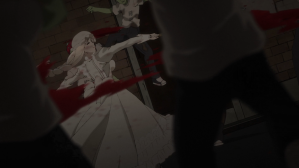 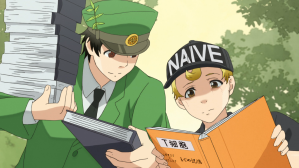 In all seriousness, I still enjoyed this week’s offering of Cells at Work!. I just think it’s criminal to only feature the platelets in a mere cameo. I mean, that cameo where they sweep leaves off the ground was AMAZING but it’s just that, a cameo. Hell, Red’s barely in this episode either. Instead, this episode focuses on a Naive T Cell, a type of T-Cell dealing with new antigens for the first time, as he stumbles upon an influenza virus under the guise of a zombie invasion.

Once again, Cells’ re-imagining of the human body is very entertaining. The whole zombie invasion scenario is a really smart to convey the intense work your body performs so that you can recover from the flu. You see the T-Cells and White Blood Cells fight a prolonged and intense battle against a horde, the “weather” getting warmer, and constant rockets from the nose getting fired. It all connects reasonably well to the experience of getting sick.

The characterization is spot-on. Attributing hyper masculinity to the T Cells is such a silly way to imagine them but it almost makes too much sense, especially with what happens when the Naive T Cell “activates”. That guy literally became a JoJo character at that moment. Even better is the anthropromorphism of the macrophages, a very civil-looking lady wielding a stinking cleaver to match her specialized role and deadly force. The B-Cell being some engineer with a blaster makes sense too though he ends up having an (intentionally) anticlimactic introduction due to JoJo hogging up all the spotlight. Actually, I do love how Naive revers to his lame form and B has to reconfigure his blaster once another, different influenza virus shows up. It’s a pretty accurate scene once you get the science behind it.

Overall, I’d say this episode was pretty good. Really, it was. I mean it…

Watch Cells at Work! on Crunchyroll

Read My Cells at Work! Reviews