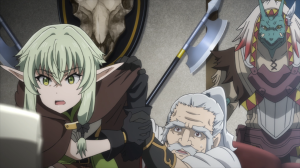 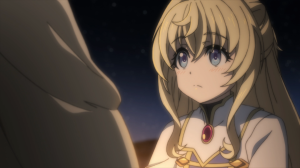 I don’t completely subscribe to the Three Episode Rule but there are plenty of anime where that practice seems most applicable. Goblin Slayer happens to be one of them. That first episode was pretty rough around the edges but the more time I spend with the whole show, the more I find myself digging it.

It most certainly helps that Goblin Slayer has now formally introduced the rest of its principal cast. In an era obsessed with isekai harems, it is so damn refreshing to see a legitimate fantasy party. Just look at that line up. A High Elf Archer (Nao Touyama), a Dwarf Shaman (Yuichi Nakamura), and a Lizard Priest (Tomokazu Sugita). You can’t get any more legitimate than that, not to mention there’s variety to boot.

I suppose this setup errs on the side of traditional though Goblin Slayer seems to be doing a good job differentiating it. The racial tensions between High Elf and Dwarf is fantasy 101 though making the dwarf character the smart one is not something I see very often. For example, whereas High Elf makes rude remarks about Goblin Slayer’s equipment, Dwarf recognizes their utility in combating goblins. Goblin Slayer could’ve easily made this character the drunk buffoon (they still make him love booze at least) so it’s interesting that it went with this particular angle. Meanwhile, you have Lizard Priest acting as a middle man in the trio. His calm personality and spirituality is pretty intriguing and I really hope this series will explore more of that.

So what exactly does these adventurers want with Goblin Slayer? Why, to kill some goblins of course! Well, there is apparently an army of demons on the horizon and the trio’s respective races are allying with the human kingdoms to combat it but naturally and hilariously, Goblin Slayer could care less. Unless the Demon King is a goblin, I have a hard imagining the protagonist of this story getting involved in the grand scheme of things. I swear, this man’s single-minded obsession with killing goblins never ceases to amaze me.

Then again, maybe this man is a bit too obsessed with killing goblins. It kind of says a lot if he actually has to ask a lizard man and an elf with light green hair if they’re goblins. I mean, that’s just stereotyping right there.

The relationship between Goblin Slayer and Priestess is growing more compelling as time goes on. As emotionally stiff as that the former is, he does have a way of showing compassion to a select few. It’s implied that Goblin Slayer is giving a bigger share of his pay to Priestess and him planning to tackle the new job alone is to let her get some rest. That he ultimately goes along with Priestess’s decision to accompany him suggests that he does listen to her too. There’s apparently some rumors saying that he’s using Priestess as a bait for goblin hunting but that couldn’t be farther from the truth. At the same time, Priestess continues to look after Goblin Slayer when it occasionally appears to be taxing for her. The bit where she puts a blanket over him at the end particularly clicks for me. It’s a very nice contrast to the metallic armor that Goblin Slayer confines himself in and a reminder that he is still a human for someone to care for. Frankly, the more this anime leans on this aspect, the better. Less edge please (though keep that electric guitar, it’s hilarious).

With that dynamic making solid progress, I’m curious to see how adding three more characters into mix will affect things. It seems to be off to a good start. Dwarf Shaman and Lizard Priest both seem to acknowledge Goblin Slayer’s skills though High Elf Archer seem to just keep pushing his buttons. Believe me, seeing that girl drunk was hilarious but at this rate, maybe Goblin Slayer will try to kill her and claim he really did mistake her for a goblin. At the very least, I’m hoping the action will at least benefit from having a full party of adventurers. Next episode appears to be where the goblin carnage resumes so I’m hoping Goblin Slayer is up to the task.

So yeah, I am liking Goblin Slayer. How scandalous of me! I don’t know if I’ll cover the whole show but I’ll at least keep the episode reviews going until the midseason.