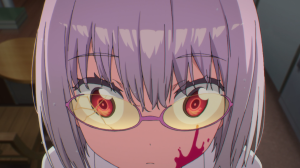 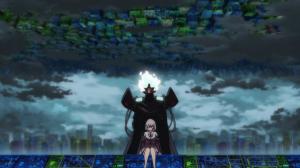 I’ll admit: “Gridman” is losing me a teensy bit with its final stretch. Mind you, it’s nothing godawful. This is nowhere near the burning trainwreck that Trigger’s other mech anime that shall not be named was. Trigger would have to try to top that (and by all that’s good in the world, please don’t, Trigger). Still, there are a lot of moments in this penultimate episode that, even when good, still could’ve been better if this show had more time in the oven or had more time to work with. I’d say I like this episode overall but it is one of Gridman‘s weaker offerings and it could stand to be much, much stronger.

So big surprise: Yuuta survives. I’ll give Gridman points for making his near-death experience feel as suspenseful as it could be but given what kind of show this is, he ought to still be alive. It is kind of contrived that Akane conveniently missed any vital organs though. No wonder, she prefers to make giant monsters to do the murdering for her.

Having Yuuta out of commission for a bit is enough for a compelling dilemma but Alexis really does spice it up by summoning all of Akane’s past Kaiju creations onto the battle torn city. Fortunately, Anti is there to hold them off as GridKnight and the fight that ensues is simply put, spectacular complete with some terrifically framed shots (just look at this post’s featured image for an example). It only gets better when Gridman finally does join the fray. I particularly like how GridKnight gets use to Caliber which sort of caps off the strange friendship those two have surprisingly developed together these past few episodes.

There is one thing brought up about Anti that I kind of wish Gridman explored further. When Anti offers to help, Sho initially opposes the idea because, as a kaiju, he ran amok with no care for the human live his presence endangers. In fact, even as the more heroic GridKnight, he still fails to understand why he should be careful around civilians. It’s a really valid point brought up by Sho…but the ethical discussion kind of just ends there. It would’ve been nice to have a scene where GridKnight finds a civilian near him and takes Sho’s words to heart by making sure that person gets to safety at the risk of limiting his combativeness. That’s all you really need but that sadly doesn’t happen, thus leaving an otherwise strong point by Sho unattended.

Speaking of Sho, that kid sure has a surprising amount of character development this episode. Along with his grudge towards Anti, you also have him dealing with an epiphany that his excitement for mecha vs. kaiju action is in poor taste when the conflict very much becomes real. It’s a great angle to take with this character but at the same time, I was thinking to myself where this even came from. A bit late to bring this stuff up now if you ask me, especially since Sho has seen Gridman fight kaiju a near dozen times now.

Moving onto to Yuuta, I’ll be frank and say that I am a little puzzled over the twist surrounding his character. See, it turns out that the Yuuta we’ve been following isn’t the real one and that he is actually a part of Gridman assimilating the real one’s body. It kind of explain why Yuuta has amnesia and how he and Gridman are linked to each other in the first place. I suppose Junk, then, is a bridge for which the Hyper Agent can access his true form for when the situation calls for it. What stumps me though is how this retroactively affects a lot of what we’ve seen Yuuta do. His feelings towards Rikka obviously merits the most re-observation. Was that Gridman assimilating the real Yuuta’s crush or did we actually see a robot fall in love with a teenage girl (take that, Bumblebee)? This is something the finale might want to elaborate on.

Boy the writers really are pushing the sympathy angle with Akane, huh? At this point, I can safely say that I’ve only been able to enjoy this character strictly as an antagonist. She has been really entertaining as a psychopath but very little has been presented that warrants feeling sorry for her. You can show her looking depressed all you want, I still think she hasn’t truly earned any sympathy. Which makes it all the more baffling that Rikka shows up to tell Akane that she still wants to be friends with her. Really? After all the crime Akane committed, including trying to kill Yuuta? After admitting that everyone was created to be her friend? Either Rikka is a saint or a complete idiot. And as much as I like Rikka, I am frankly leaning towards the latter right now.

I’ll say this much: turning Akane into kaiju seems awfully fitting. Last episode, she claimed kaiju are creatures of pure malice and considering how monstrous she’s become in her own right, Alexis turning her into a real monster just seems like the natural course to take. That said, I imagine this will serve as the last push in turning her over to the good. I remain unconvinced that redemption is what this character deserves but if Gridman can finally make it work at the last minute, that would indeed be pretty impressive.

For all of my SSSS.Gridman Episode Reviews, check out the show’s archive page!