I know this isn’t an anime but let me be a fanboy this one time.

It blows my mind that SpongeBob has been around for this long. The show’s practically been around my entire life. I am of the opinion that SpongeBob has peaked since the first movie and has gone the Simpsons route but even then, everything pre-movie has a place in my heart. So many great jokes my younger brother and I remember and can quote off the top of our heads and I’ve made a number of friends thanks to this show. Simply put, this era of SpongeBob is one of my favorite shows ever and I have nothing but adoration for the work done by Stephen Hillenburg (rest in peace) and his team.

In honor of the show’s 20th anniversary, I’m going to list off five of my favorite episodes. Mind you, this isn’t a Top 5 list per se. I’d need to refresh my memory and sit through a ton of SpongeBob before I could confidently rank its episodes. That and narrowing to an exact top list would probably be soul crushing. The episodes listed down below would probably be up there though. 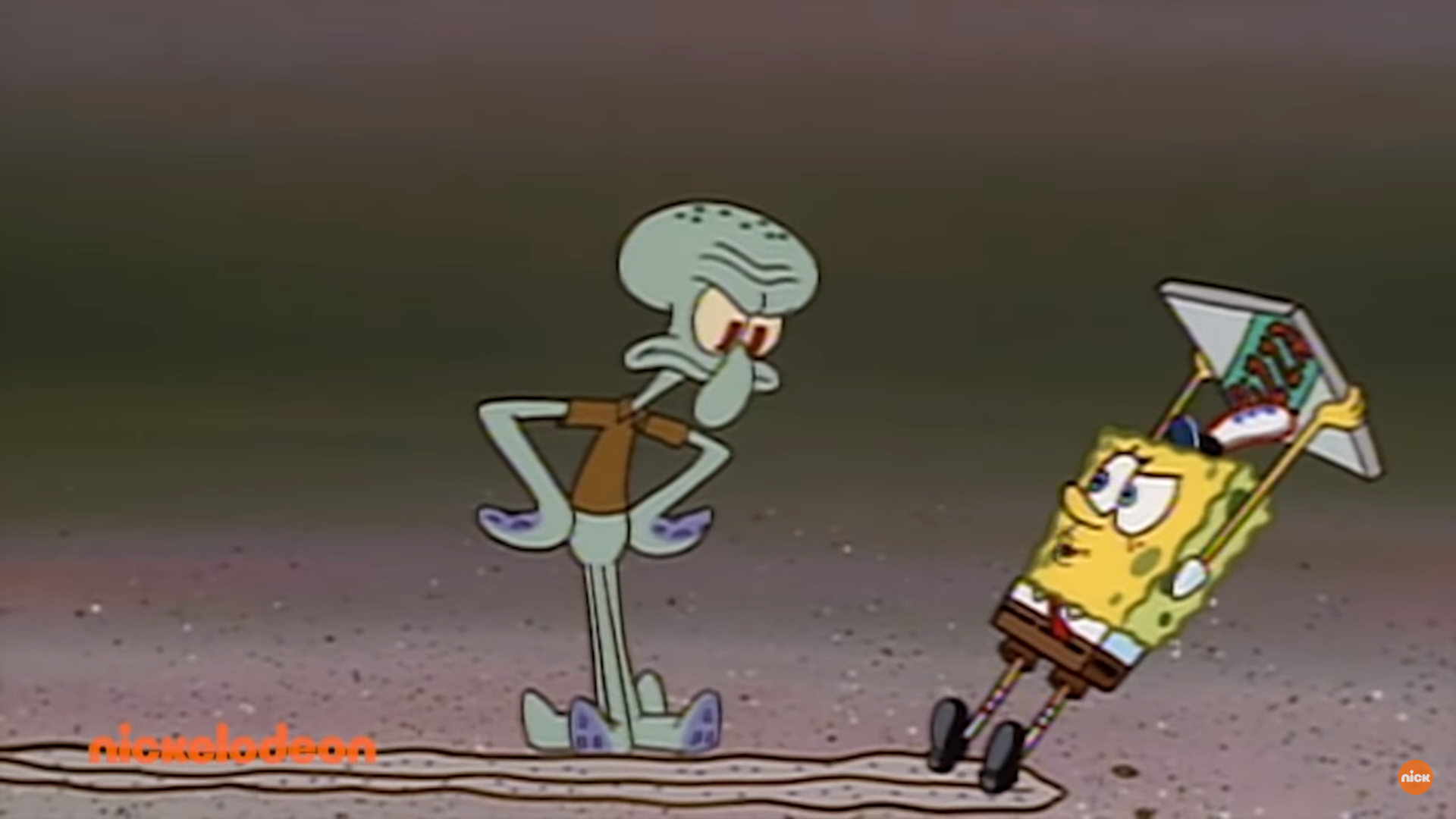 No doubt, this is a classic that helped secure the show’s popularity. Even though pizza isn’t on the Krusty Krab menu, Mr. Krabs tasks SpongBob and Squidward with delivering one when a customer asks for it. What ensues is an adventure that epitomizes the chemistry between SpongeBob and Squidward. On one end, you have an enthusiastic employee determined to deliver a box of pizza as if his life depended on it. On the other, you have his apathetic coworker who would love to do anything in life but deliver a pizza. It’s a classic routine for a classic episode. And it’s littered with so many great jokes too — the Krusty Krab pizza song, the tornado coming to a halt so that SpongeBob can disapprove Squidward’s attitude, SpongeBob driving a rock. The list just goes on. 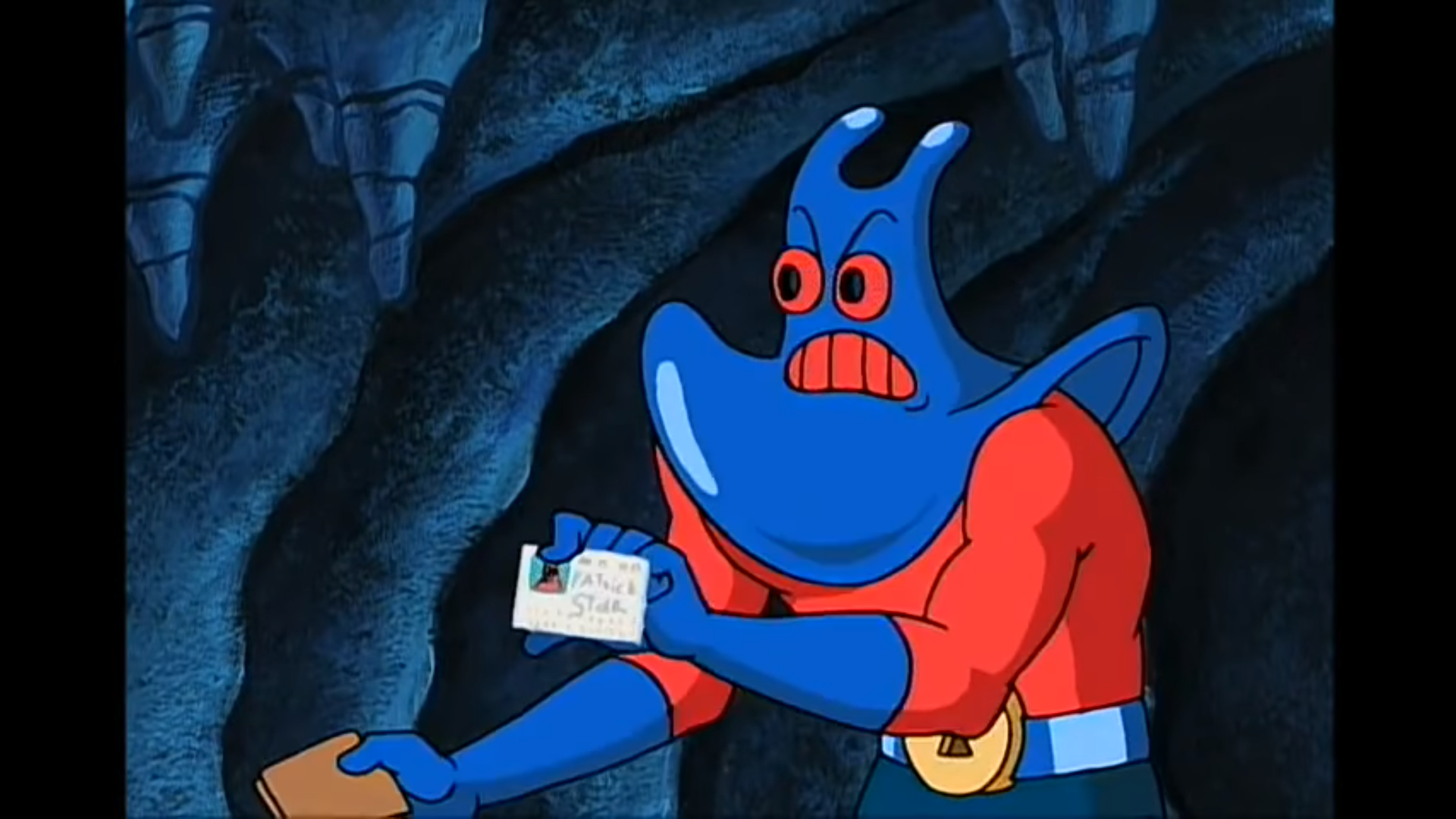 Contrary to the title, this episode doesn’t really Mermaid Man and Barnacle Boy. Instead, SpongeBob and Patrick accidentally thaw the dynamic duo’s arch-nemesis, Man Ray, from his frozen prison. In an effort to free himself of a belt that constantly tickles him, Man Ray has SpongeBob and Patrick teach him how to be a good person in exchange for his freedom. The whole episode is funny but what really makes it stand out for me is the wallet scene. As practice, Patrick drops his wallet on the ground and Man Ray tries to return to him, only to find that Patrick has legitimately forgotten he even owns a wallet. Truly, this is the funniest use of Patrick’s stupidity. 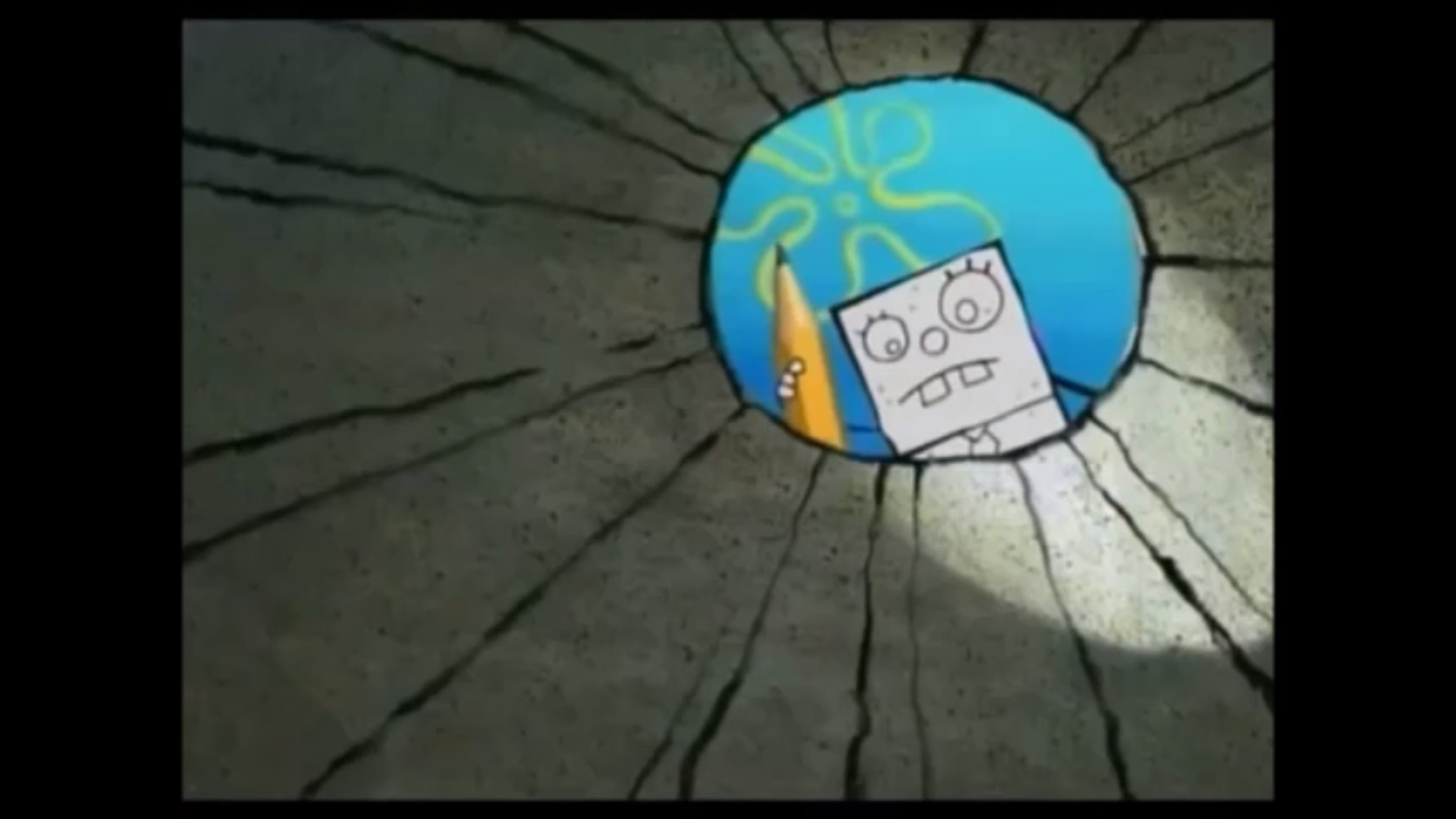 I vividly remember being pretty scared of Doodlebob. In my defense, I was like six at the time and be honest, the idea of your self portrait coming to life is disturbing enough to be used in a horror film. That said, little kid me still found it hilarious when Patrick got hit like a bowling pin or when SpongeBob accidentally screws himself over by flinging his pencil into Squidward’s house. There’s also the sailor character, portrayed in live-action by Mr. Lawrence (Plankton and Larry’s voice actor). I just love the image of some guy on a sailboat drawing the ocean with a mere pencil, only to lose said pencil twice in the episode. Lawrence’s over the top mannerism and line delivery, coupled with the narrator’s bizarre warnings, make for a great opening and ending for “Frankendoodle”.

“ALL HAIL THE MAGIC CONCH!” 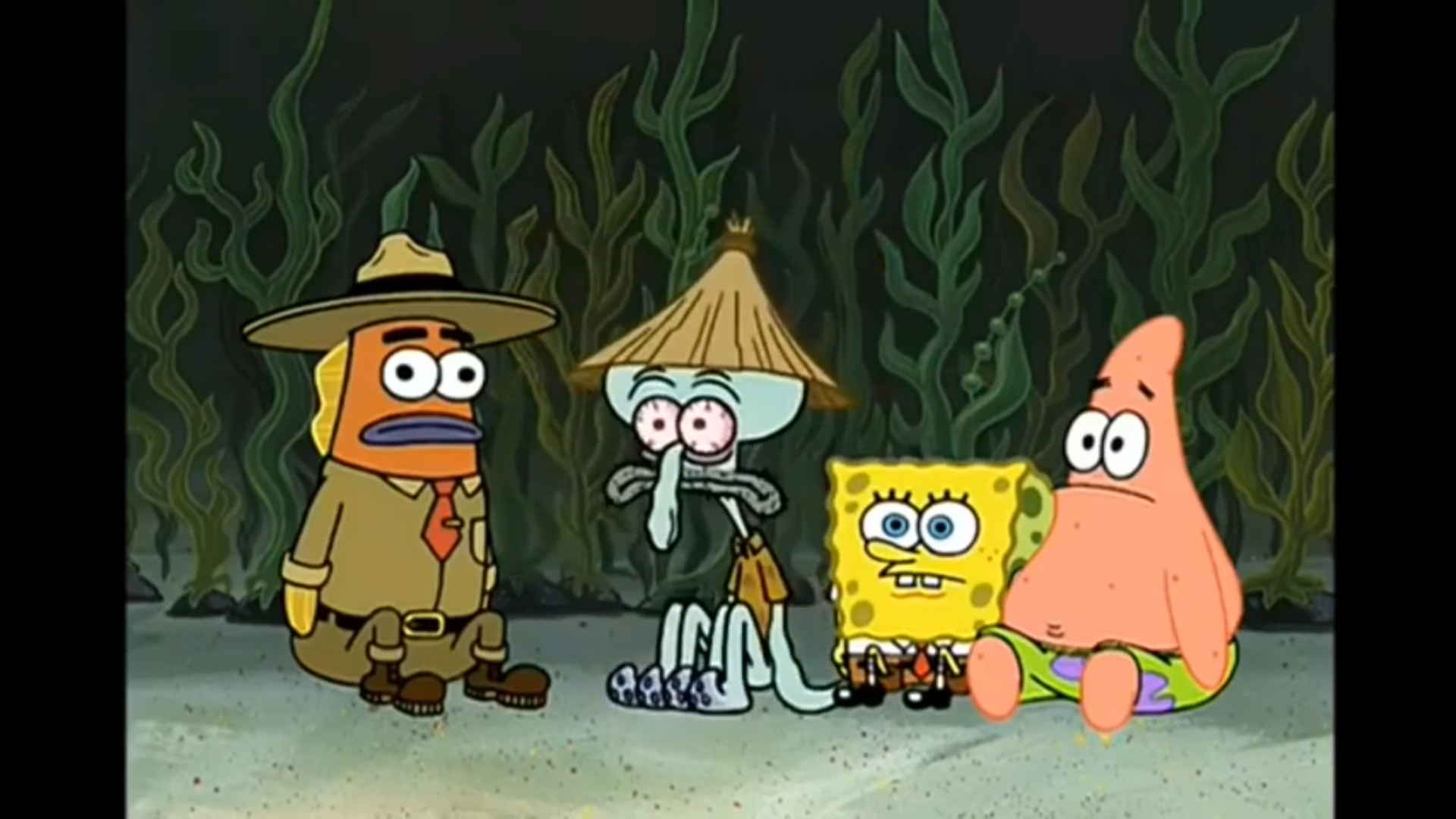 SpongeBob, Patrick, and Squidward get flung into a kelp forest and the former two decide to consult the wisdom of a toy, the Magic Conch Shell. Naturally, Squidward thinks that’s baloney but oddly enough, the conch truly knows all. What I love about this episode is how it goes out of its way to make Squidward suffer. SpongeBob and Patrick literally get rewarded with food and supplies for doing absolutely nothing and Squidward ends up looking like the dumb one for even trying to survive. After that, Squidward deals with a rather sassy conch and the appearance of ranger who arrives to save everyone…only to reveal he’s a member of the “club”. Nothing goes well for Squidward and I laugh every time I watch it unfold. 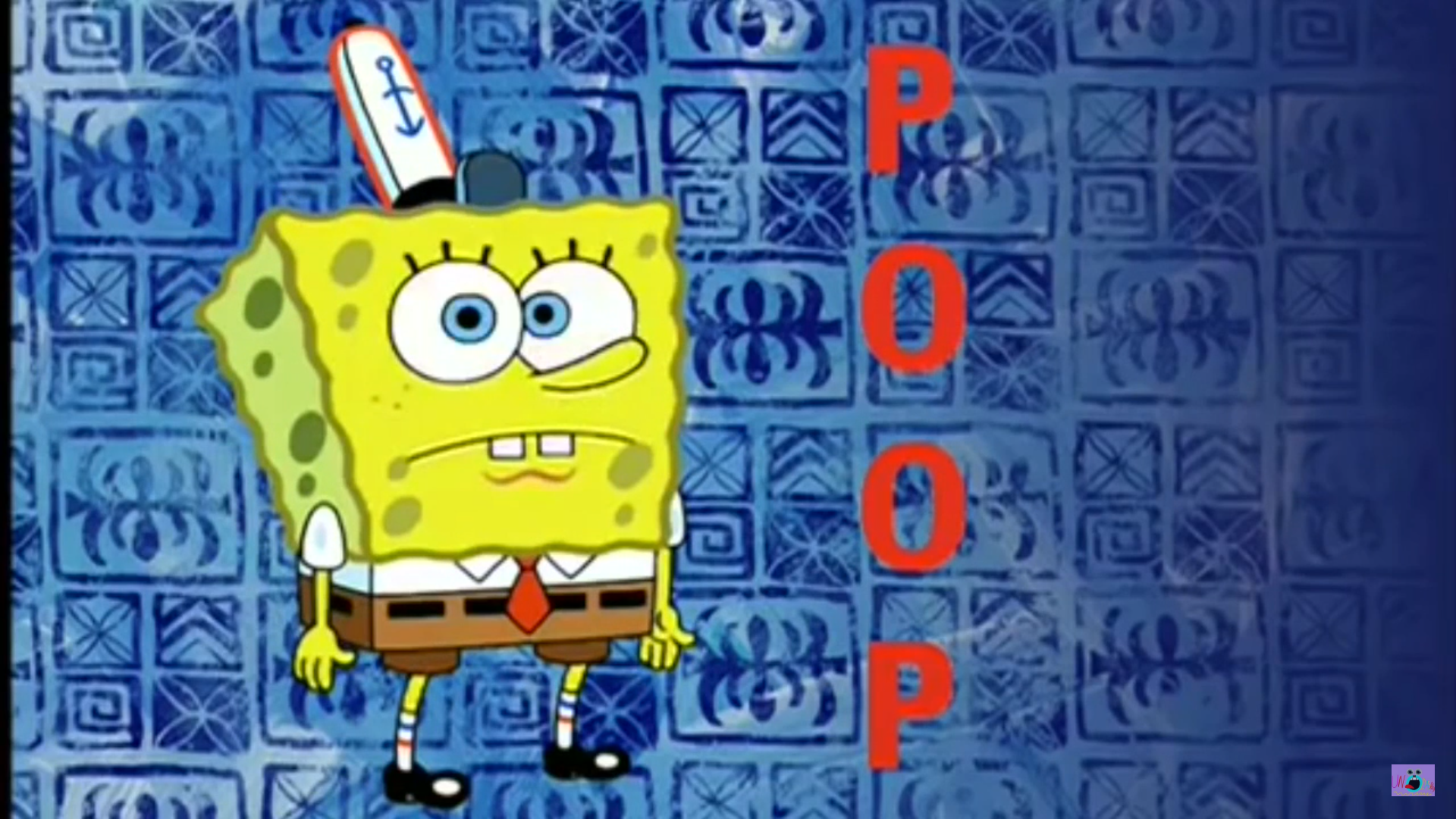 Not going to lie, I’d probably call “Krusty Krab Training Video” my #1 favorite episode. As one might assume from the title, this episode is meant to play out as an orientation video for new Krusty Krab employees. I would question the fact that Mr. Krabs apparently spent money for such a production (especially since he never hires any new employees) but who cares, this episode is great! You know you’re for a treat when the word “POOP” is used as a acronym that promotes customer service or when the narrator hypes you up with a song as the photo-realistic image of a Krabby Patty emerges into the foreground. It’s also a ton of fun seeing the usual antics re-contextualized as part of a training video such as SpongeBob embodying the “ideal” employee to Squidward’s disinterest in his job being used as an example of poor workmanship. I only have one gripe with the episode and it’s the ending. It’s perfect how the episode abruptly ends before it tells you the Krabby Patty secret formula but for years, I honestly thought something was wrong with Nickelodeon’s broadcast and that pissed me off.

8 thoughts on “5 of My Favorite SpongeBob SquarePants Episodes”