It’s been a while since I’ve done an unboxing. As silly as this sounds, I actually have a backlog of goodies I want to share on my blog (a lot of which I got from Anime Boston a couple months ago). I just haven’t gotten around to them because, well, they’re unboxings. Unless these posts give me a ton of ad revenue, this is always going to be an auxiliary thing I do.

That said, Fire Emblem: Three Houses just came out and I got the Seasons of Warfare Edition soooooooooooooooooo

I wasn’t sure what to make of this game pre-release. I really like Fire Emblem. Hell, I’d go as far as call Blazing Blade one of my top five, maybe even top three favorite games of all time. But man, I was not fond of the 3DS era. I did get hooked into the series because of Awakening but every subsequent playthrough made me realize how flawed that game is. I absolutely hate Fates. Seriously, fuck that game. Echoes was really good though but given that it was a remake of Gaiden, I figured it was just going to be a one-off thing and we’d be back to Waifu Emblem again for the Switch.

Still, I want to give Three Hoses a chance. I’m too much of a fan to just ignore it. And being a Nintendo collector, I of course got the Seasons of Warfare Edition. This edition includes the game in a steelbook case, an art book, a soundtrack CD, and a 2020 calendar. Let’s take a look, shall we? 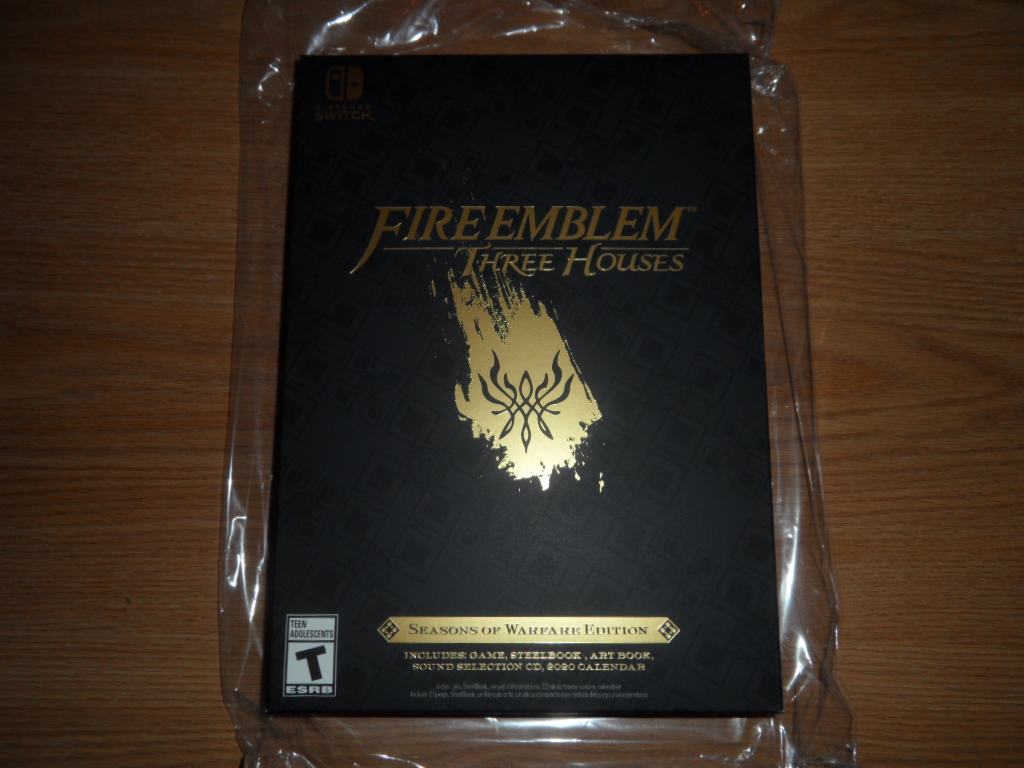 You’ll have to excuse the camera flash. The room I took the pictures in doesn’t have the best lighting. I would’ve taken this during the day but the UPS courier took their sweet time delivering this edition to me. It also doesn’t help that a lot of the stuff here either uses a lot of black.

I kind of like the minimalist presentation of the front of the box. The color scheme reminds me a lot of the Breath of the Wild Master Edition (which I also have). That said, I think the Japanese special edition art is way better. Seriously, look it up. 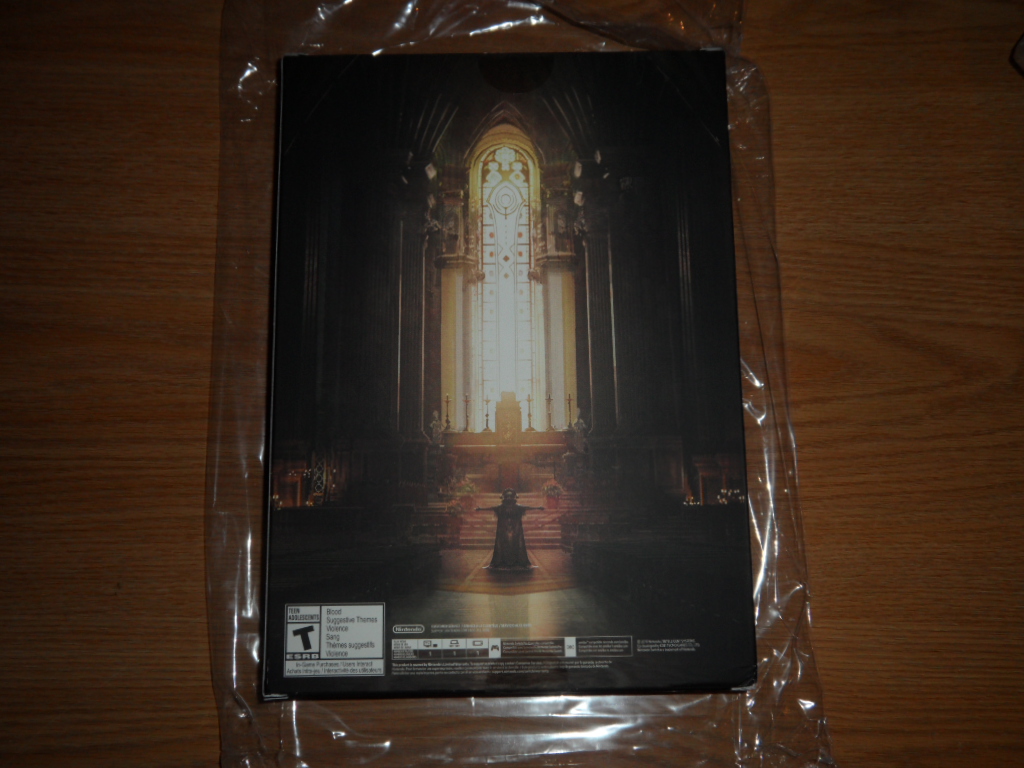 The back is also really nice. It’s artwork of the Officer’s Academy which is where the game is largely located in from my understanding. 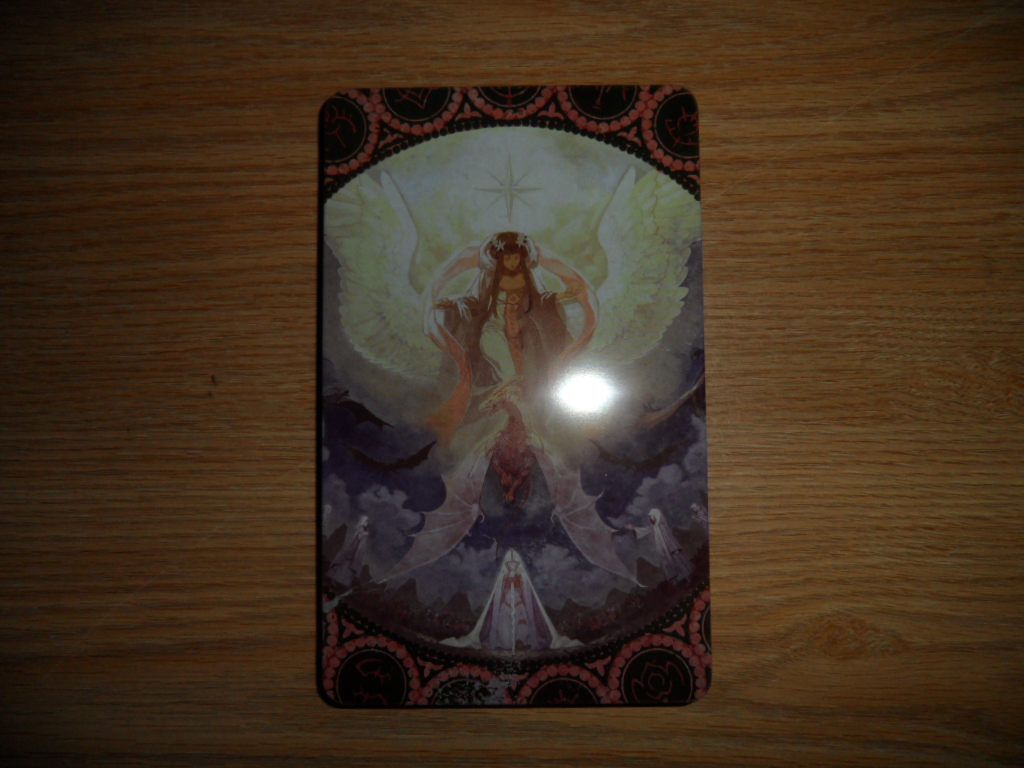 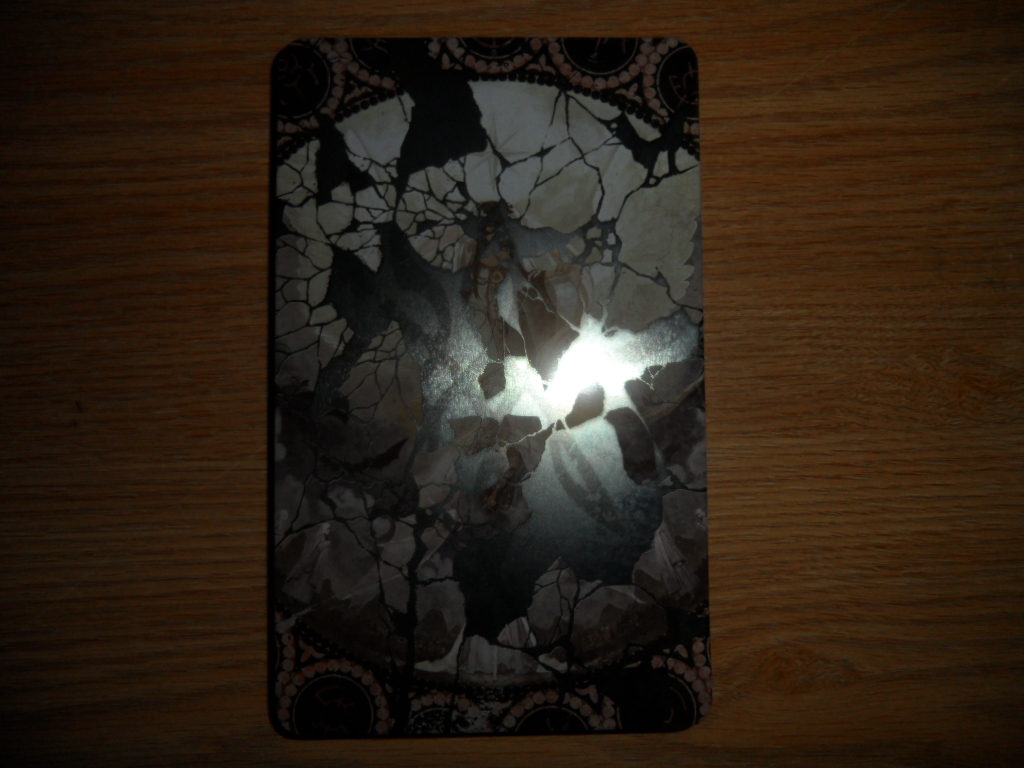 I prefer it when special editions include the standard case and a steelbook but for once, I don’t mind I didn’t get the former. The regular cover art sucks.

This steelbook meanwhile is lovely. I don’t know who the lady on the cover is but this is such a huge improvement from Nintendo’s past steelbook designs, especially Smash Ultimate‘s). Also, I couldn’t get a decent picture for this but the steelbook has the title of the game written on the spine label! I’m not kidding, that’s actually something the Smash Ultimate and Xenoblade 2 steelbooks lack. I know that’s a minor inconvenient but come on, having a titled spine is still very convenient!

For the record, the steelbook included in the Japanese special edition uses different art. I’m a little tempted to import it but considering the state of my wallet after getting the US version, I should wait on that. 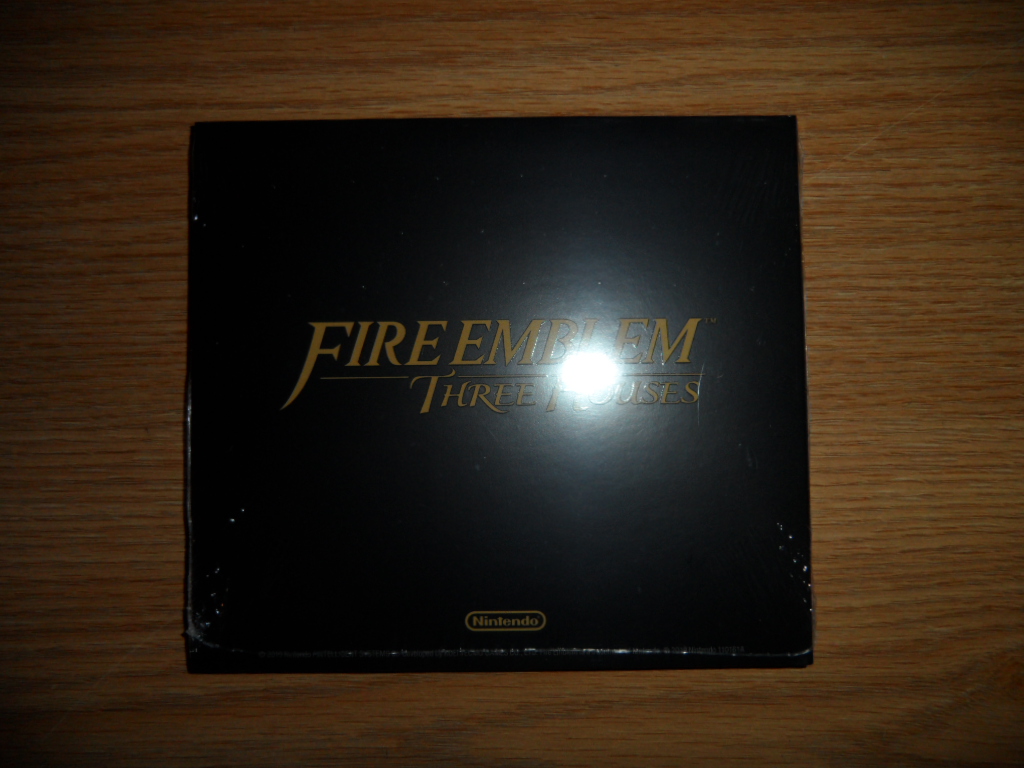 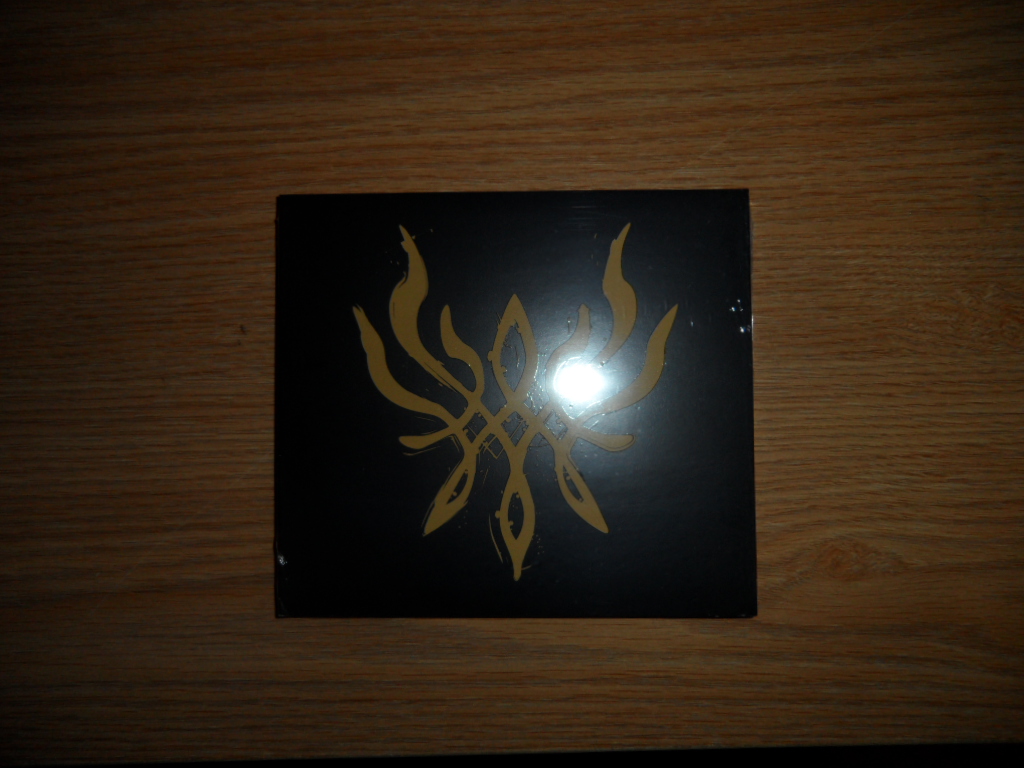 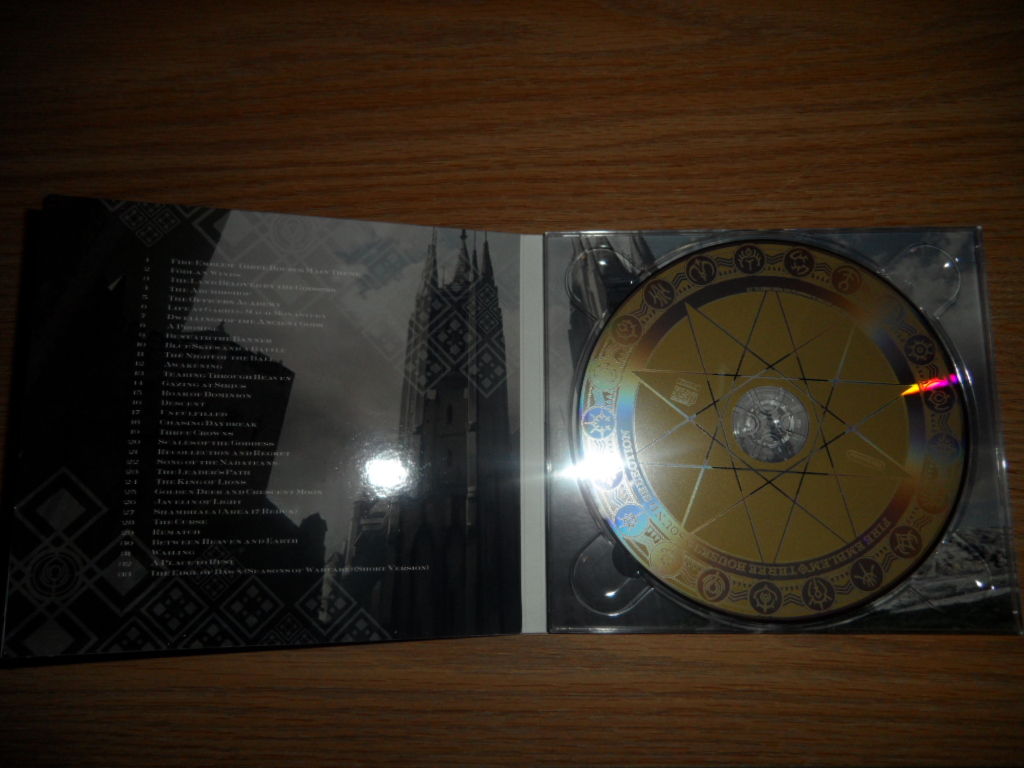 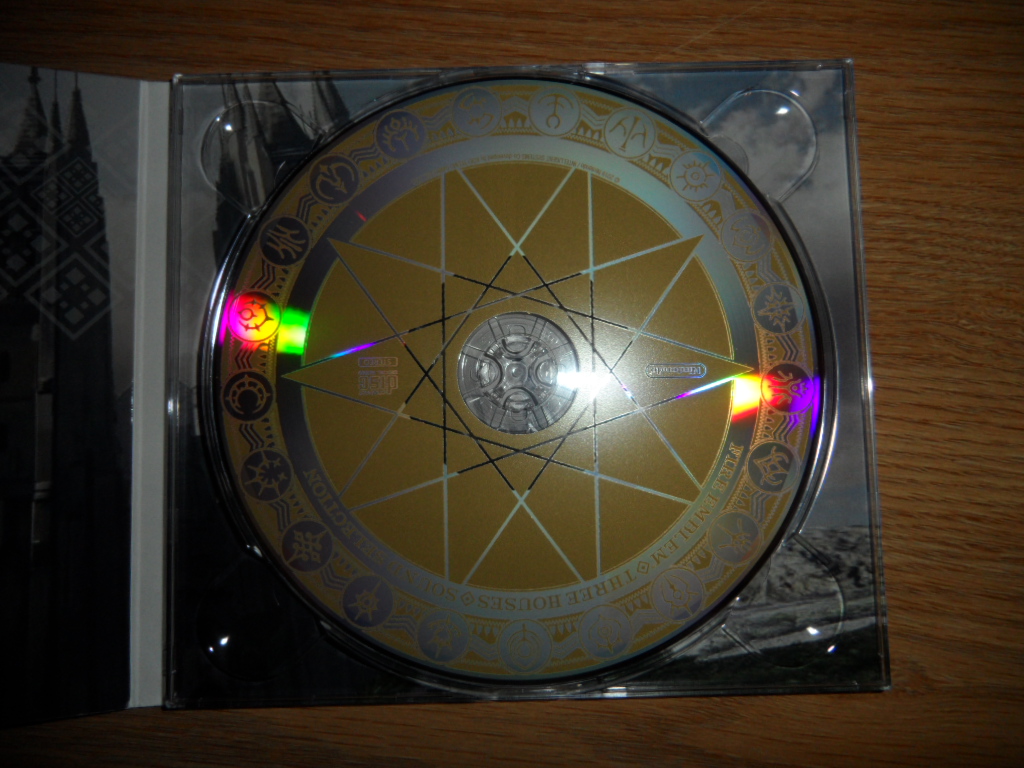 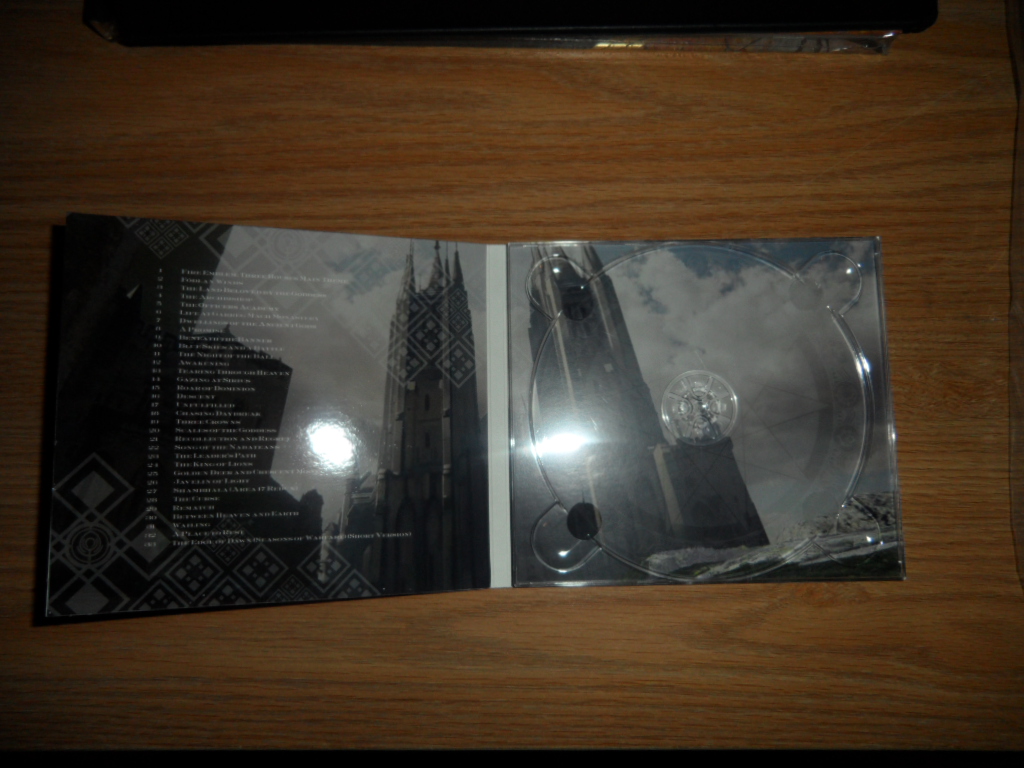 33 Tracks! That’s obviously still a small fraction of the whole OST but that’s a good number for a CD included in a special edition. Any vocal songs included are in English so I wonder if the Japanese special edition includes its respective equivalents.

For the record, I rip the CDs via I get in these special editions via iTunes. I do that because come on, who actually uses a CD player these days? The only annoying thing is that the files are all written in Japanese which is a little odd since some of the songs included are the English versions. I guess I’ll have to change the file details on later. 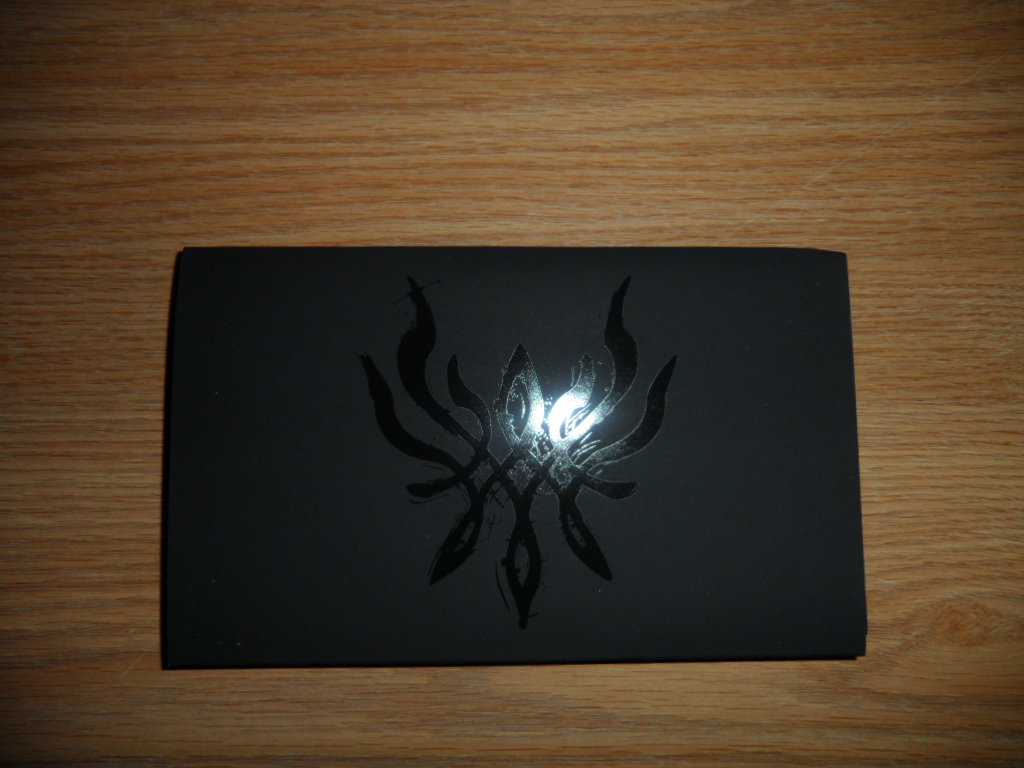 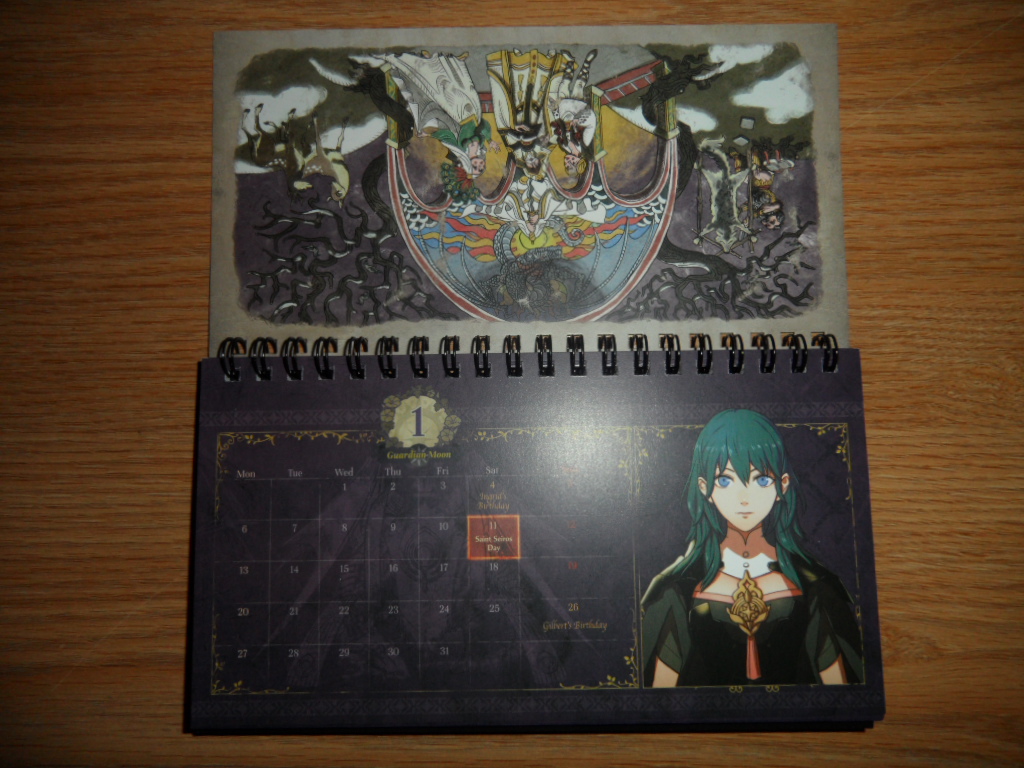 I don’t really get the point of a calendar in a special edition. It’s only going to be useful for a year.

…It is a sweet calendar though. Never mind the artwork included here, the best part is that it has all the characters’ birthdays and in-universe holidays printed down.

By the way, this calendar has a paper kickstand build in so you can present the calendar standing up. I guess you could hang it on a wall…but there’s no hole for you put a pin through so that might ruin the collector’s value of the item? 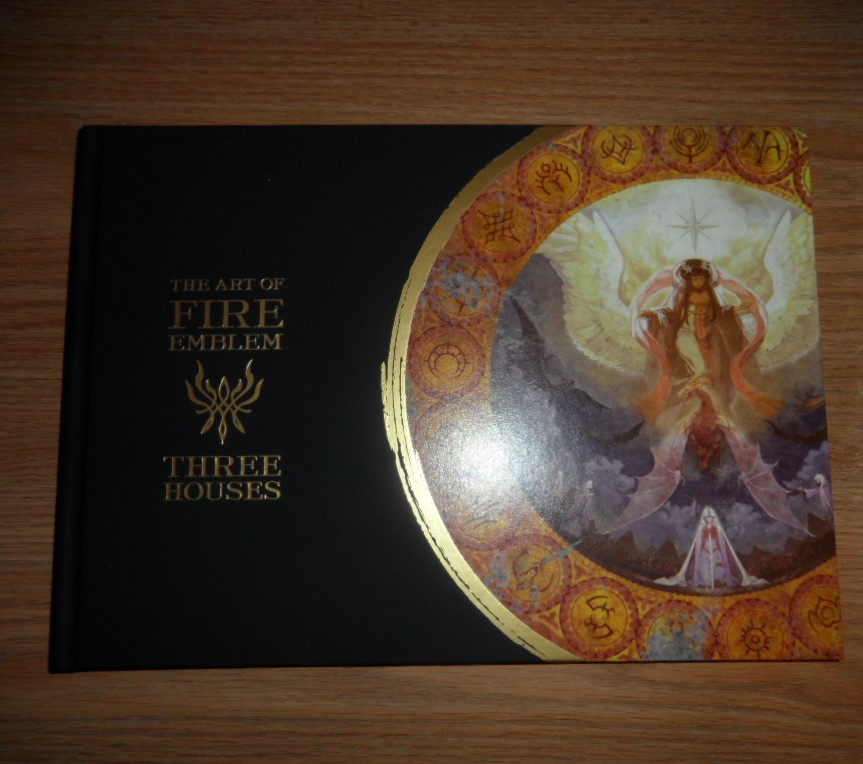 I vastly prefer hardcover over paperback so thanks Nintendo for going with the former with this art book. I kind of wish the pages were of thicker quality though. 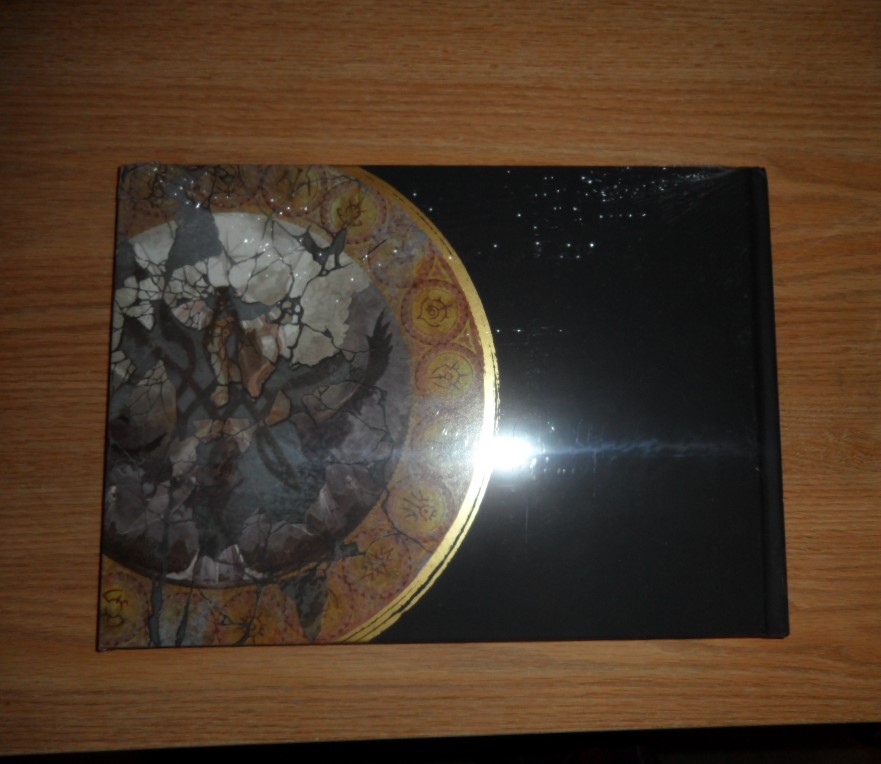 This is a pretty beefy art book. Tons of sketches for the characters, weapons, and locations; a lot of which I’ve never seen before. That’s always the kind of art book I want to see in a special edition. 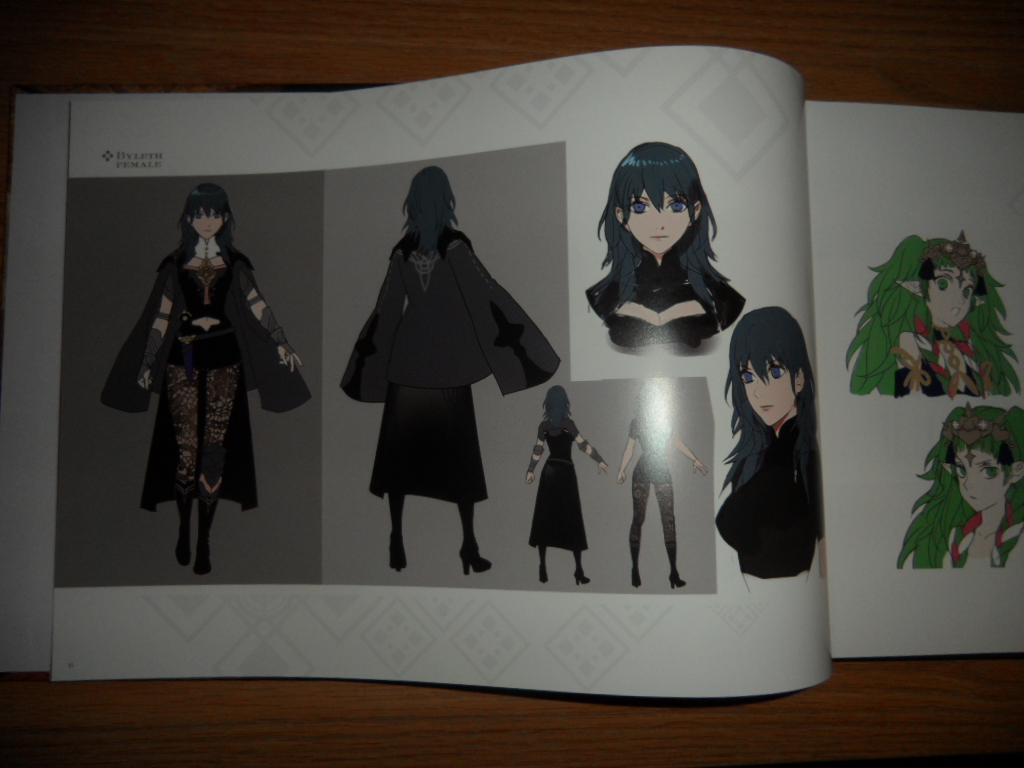 I originally wasn’t sure how I feel about Female Byleth’s design. Feels very “intentional” what with the belly button showing and the tights. Definitely something a teacher would wear. And call me weird but there’s something about the tights that seem too busy to me. How would you sew tights with such elaborate cut outs?

That all said, I am starting to think she looks pretty hot…I watch too much anime, don’t I? 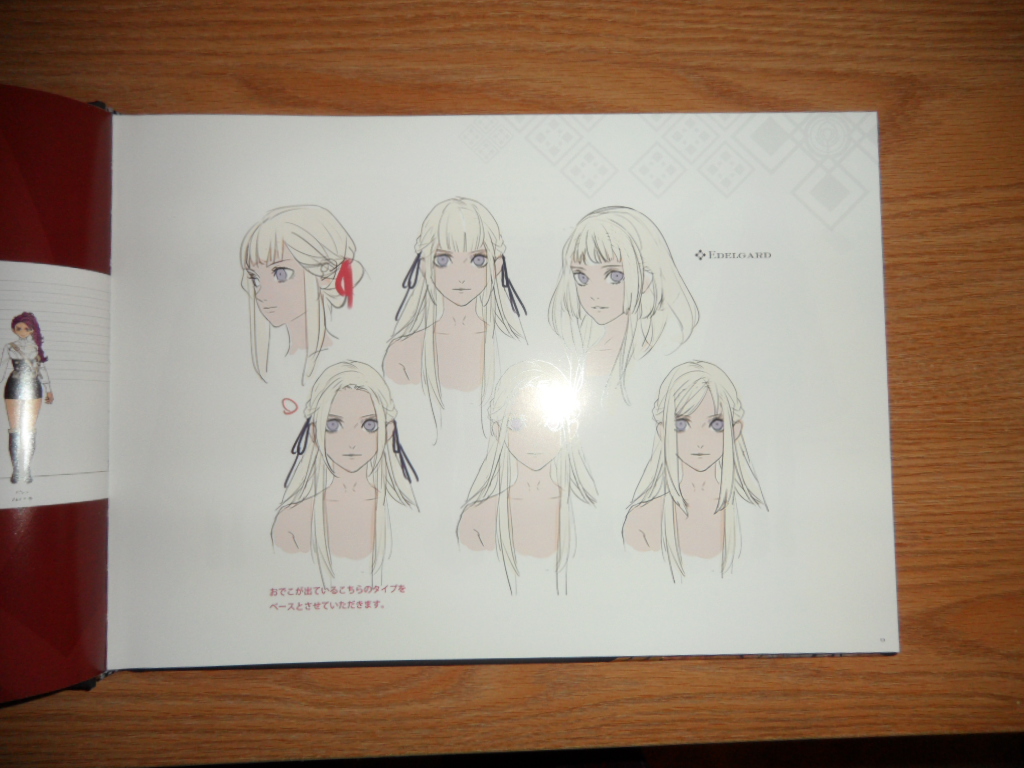 Some portraits of Edelgard, one of the three Lords in the game. This art book does include some of the timeskip character designs. I just deliberately chose not to show any in case people wanted to avoid seeing them.

In case anyone asks, I haven’t decided on which House I’ll pick for my first playthrough. Maybe Black Eagles then Blue Lions and then Golden Deer. That could very well change as I play through the game. We’ll see. I’m just glad all the routes are in one place and not sold separately like how it was with Fates (again, fuck that game).

And with that, I conclude this unboxing. Now if you excuse me, I’m off to go play this game. I’ll still try to catch up on the Summer anime but if I disappear from a few days, you now know why. Maybe I’ll write about this game? We’ll see. I’ve always wanted to blog more frequently on video games.