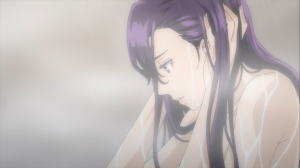 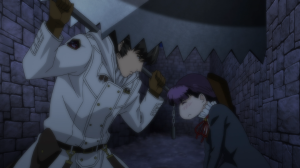 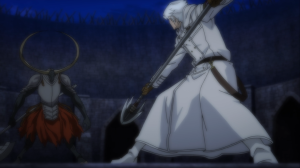 A couple of shows have fell off the watch list. That’s inevitable. Even on a vacation, I don’t have time to sit through everything and when a show starts to lose me, it becomes increasingly clear that I shouldn’t continue bothering. To the Abandoned Sacred Beasts is starting to feel like the rare inverse. The premiere was mediocre but the show has been picking up since then. Jumping the shark is still a possibility but so long as it keeps this upward trajectory going until the halfway point, it’ll be a keeper.

I owe a lot of my increased enjoyment to Hank and Schaal’s developing chemistry. Admittedly, it’s almost entirely because it is a dynamic to begin with and the first episode severely lacking in one meant that the show could only go up from there. But by its own merits, it is a pretty compelling relationship. Schaal wants to avenge her father’s death but she isn’t blinded by her goal now. She wants to see with her own eyes why Hank is hunting down people he once fought alongside with, hence her accompanying him on his travels. It’s an oddly set up duo to lead your story but it’s that oddness that keeps me engaged. Would Schaal eventually forgive Hank for killing her father the more she understands him? What does Hank hope to gain by letting Schaal travel with him? Both are pretty great questions asked by the story.

What might get old about Schaal is her naivete. I couldn’t help but roll my eyes a little when she tried to advocate for Incarnate’s innocence yet again. Although she is right that murder is an extreme course of action, it’s becoming obvious that reason falls on deaf ears once an Incarnate has gone off the rocker. Hank probably tried already so he might already know it doesn’t work. At least Schaal is starting to learn; when she saw all the people homeless because of the monster of the week, she seems to understand that the well being of the masses outweigh that of an individual. Here’s hoping she’ll get that in mind next episode.

Technically, Hank’s military associate, Liza (Youko Hikasa), made a brief appearance at the end of the premiere but this episode is where she’s properly established. It looks like she’ll be a sort of mediator between the two main protagonists. In a couple of scenes, she helps Schaal put the whole Incarnate situation into perspective such as showing her all the homeless people I mentioned earlier. And when Hank deliberately separates from Schaal for her protection, Liza shows up to help the latter catch up, sympathizing with the girl’s desire to know the truth. It also seems like she’s one of the few people Hank is still willing to trust; providing him valuable intel and resources so that he can fulfill his mission. All in all, I’m liking the role she is playing here.

In regards to the action, I must acknowledge that this episode did up the spectacle this time around. A Minotaur is a cool opponent to begin with but I was more excited with the location — a towering fortress created by the Minotaur that’s armed with various traps and weapons. Combined with the first real look at Hank’s Werewolf form and you have a much wilder fight. It’s the emotional aspect that seems to be where the fights falter at. I’m sorry but using flashbacks before the subject dies almost never works. It tends to be a cheap way to evoke sympathy and it feels even cheaper when the one who’s dying barely had much screen time to begin with. Hank pulling the trigger ought to carry a lot of weight but it just doesn’t when I’m only now learning what his comrades meant to him. Again, that whole first episode could’ve and should’ve been a whole season. It’s a damn shame it wasn’t realized to its fullest potential.

One last thing I couldn’t help but notice is the slight use of fan service. I did notice that Hank’s military associate, Liza (Youko Hikasa), has quite the character design but I’m now realizing how overt it is when standing against the more modestly dressed and proportionate Schaal. And speaking of Schaal, that was a pretty deliberate shower scene there, animators of this show. But do I find the eye candy a bad thing? It depends. In a story about a werewolf punching his monster buddies, fan service seems rather ill fitting but so long as it’s not in your face and it distracts the story, I can be perfectly okay with it.

Watch To the Abandoned Sacred Beasts on Crunchyroll