Still behind on Episode Reviews but in the spirit of all the drinking that’s going to happen for St. Patrick’s Day today, I wanted to do something for the occasion. There are in fact a lot of drunk scenes in anime. It’s practically a cliche at this point though it is one I personally enjoy seeing. So for fun, here are five of my favorite drunk scenes in anime! 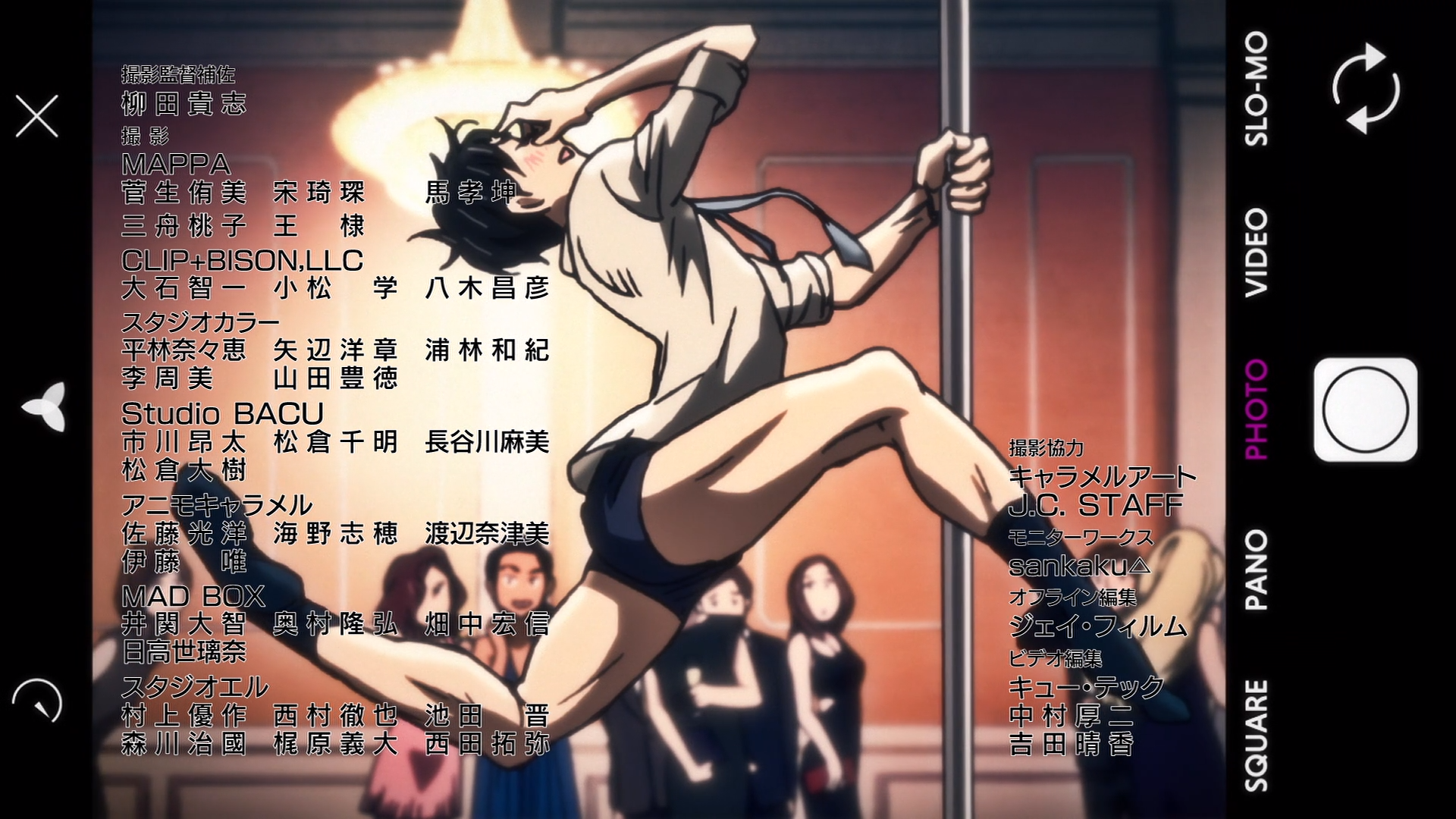 As soon as you learn Yuri once got drunk and challenged everyone to a dance off, you’re dying to see such a scene in greater detail. Thankfully, Yuri on Ice‘s staff were on the same page and for the credits of Episode 10, we get this beauty. I don’t know what amazes me more — how good Yuri is at pole dancing, that Christophe joins the fun, or that we have a Yuri on Ice scene that pulls off “sexy” without Viktor (think about that last one). 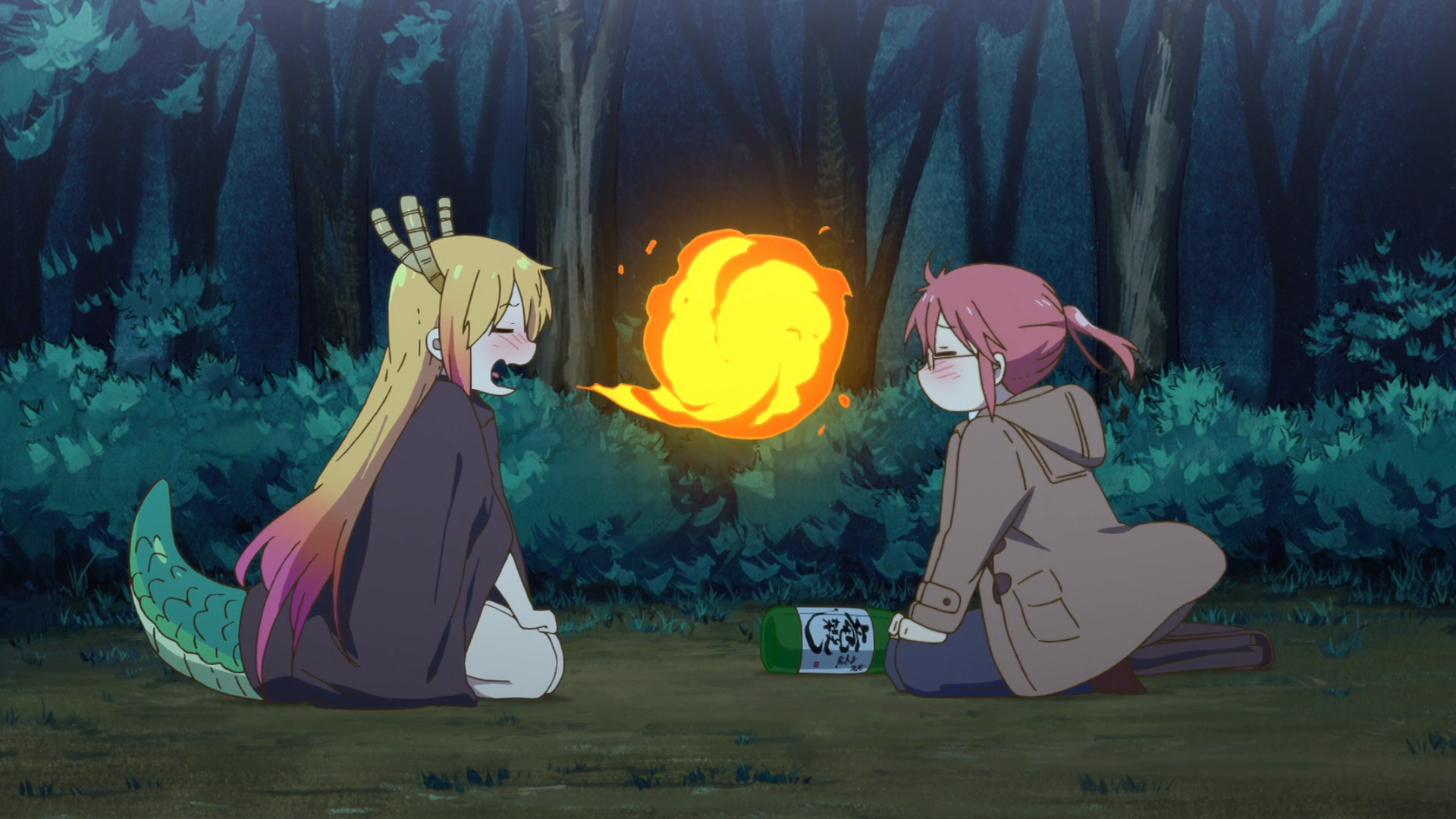 Just the passing mention that Kobayashi got too drunk when she first met Tohru was enough but it’s nice that, for the penultimate episode of Dragon Maid, we got to see the actual encounter in a flashback. This scene is both funny and heartwarming. It’s funny in the sense that Kobayashi is so drunk that the fact that she’s talking to a dragon doesn’t alarm in any way. Not to mention that Tohru quickly gets drunk with her. However, it’s heartwarming as this chronologically marks the start of the Dragon Maid‘s most pivotal relationship. Those two may be drunk but the rapport they build is genuine. 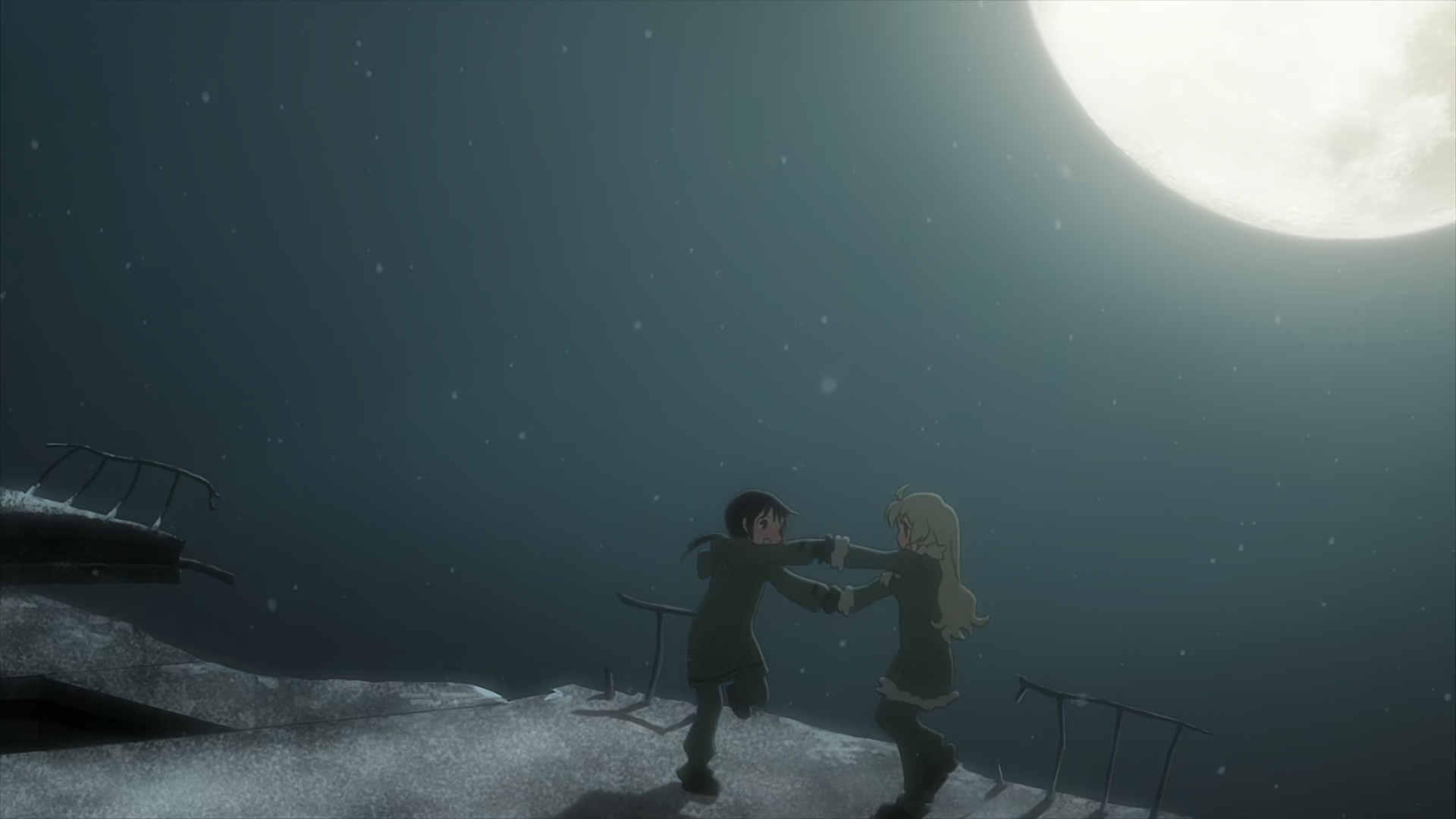 I think Chito and Yuuri are underage here but if you think about it, are there really drinking ages when there’s no one around to uphold them?

In all seriousness, this is one of Girls’ Last Tour‘s more surreal and breathtaking moments. Just one night, the main characters find a bottle of booze and not knowing what it is, they just drink it. Yuuri seems able to handle alcohol but Chito immediately gets wasted. It’s funny and cute but things do take a more emotionally charged tone when Yuuri gets Chito to dance with her under the moon. Chito is generally a pretty uptight and cautious person but here, she’s at ease and basks in the moment. And moments like this serve as a bright spot in the seemingly aimless and bleak journey these two are on. 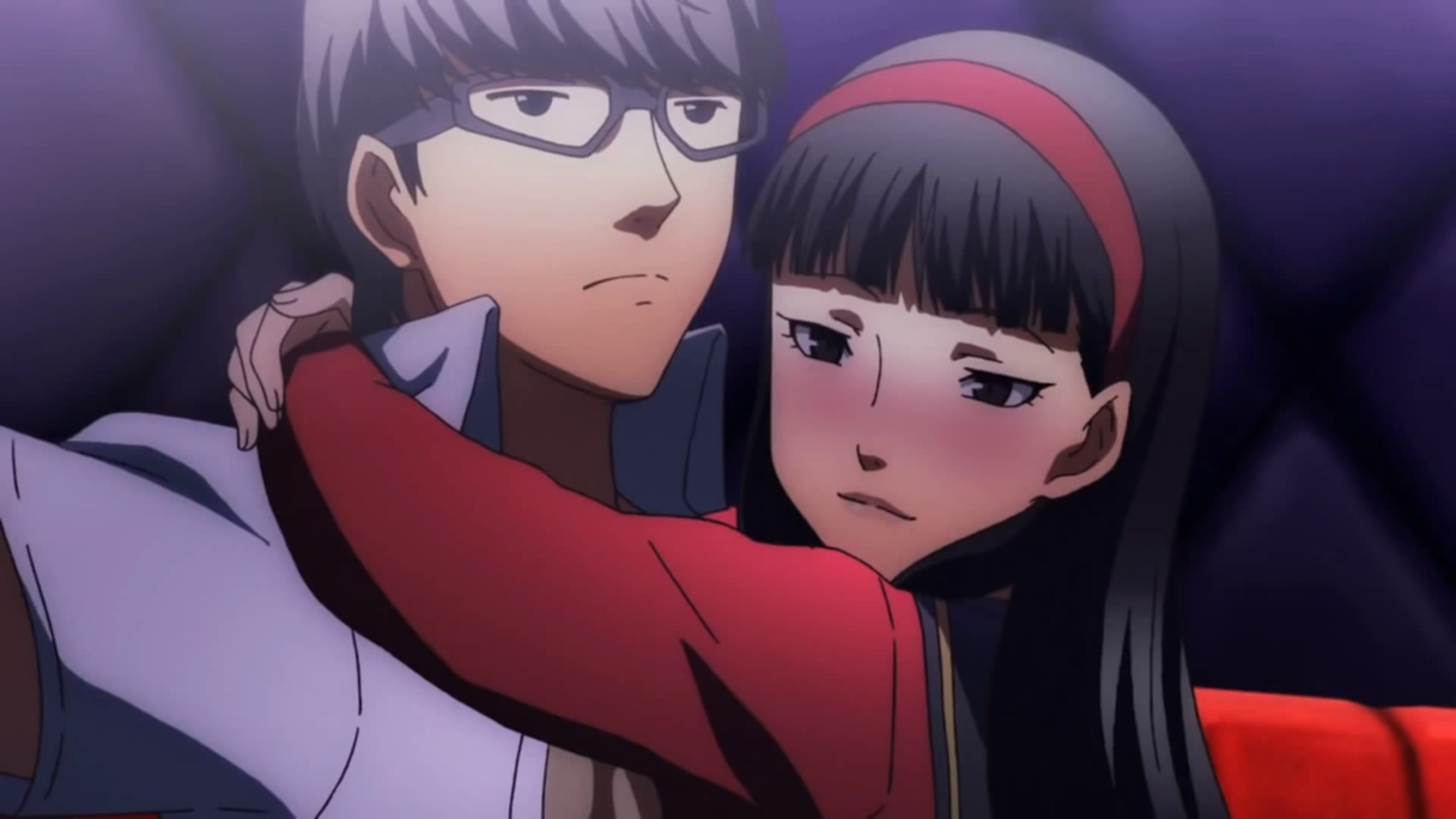 If you really want to argue semantics: no, these characters aren’t technically drunk on alcohol. But who cares? This scene is too good to pass on.

I have somewhat mixed feeling towards Persona 4 the Animation. On one hand, this introduced me to what would end up as my favorite game of all time. On the other hand, I now realize that this anime rushes through a lot of material and barely captures what makes the game great. The King’s Game, however, is one scene this anime got 100% right. It may even be funnier thanks to Yu’s characterization in the anime and the decision to make him drunk. The result is a generally taciturn boy flaunt his swag and get all the girls, completely owning the role of King. Simply put, it’s glorious. 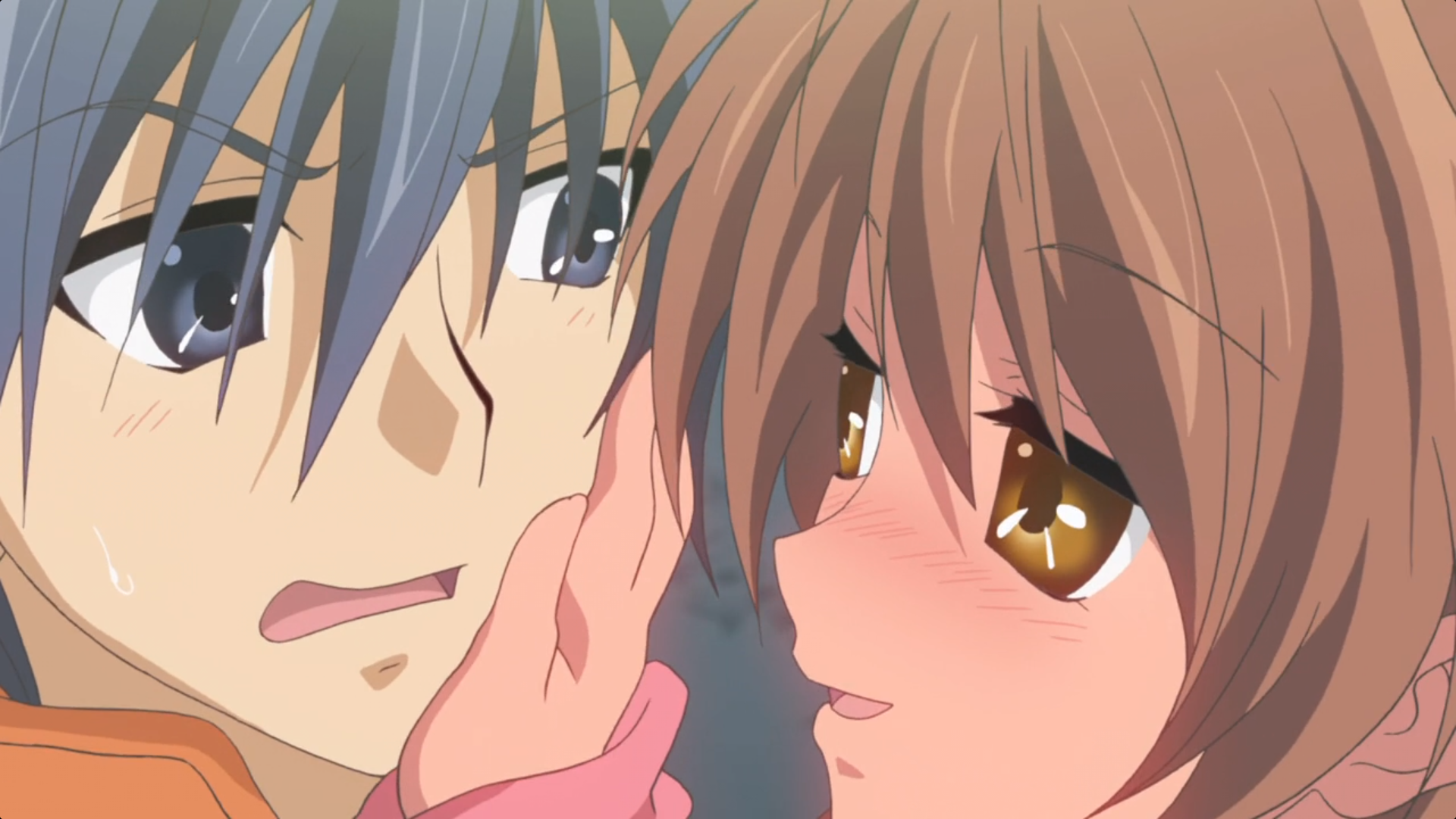 Of all the characters in anime, Clannad‘s Nagisa Furukawa is the very last one I’d ever expect to see drink booze. But sure enough, it happens in After Story and it is quite a sight to behold. Nagisa drinks for the first time, immediately gets drunk, and begins to accuse Tomoya of being more attracted to Sanae than her. All that alone is hilarious but even better is when Sanae and Akio add fuel to the fire for kicks, provoking Nagisa even further and prolonging Tomoya’s suffering. Karma does strike though when Akio learns that Sanae is actually just as drunk as Nagisa and is serious about knowing if Tomoya is interested in her. I guess apple doesn’t fall that from the tree. Overall, this is scene is Clannad at its funniest…enjoy it before the tears start pouring out.

8 thoughts on “5 of My Favorite Drunk Scenes in Anime”