Special thanks to Ty at Watashi wa Bucho!! for nominating me for the Sunshine Blogger Award…almost half a year ago. Yeah, sorry about that. I’m still not very good at responding to these in timely fashion. Just know that even if I’m late, I’m always deeply flattered by people tagging me in their Awards posts.

Zephyrmon from Digimon Frontier. I think any anime crush is embarrassing by default (because, you know, they’re not real) but it’s definitely more so when the character is obscure. No one saw Frontier and I’m pretty sure if you ask someone who’s a hot Digimon, they’ll most likely say Angewomon. Also, you design Digimon like that and some kid is going to find it hot. It’s not even just the skimpy outfit; the feathers and talons also weirdly do it for me (and I’m not really a furry).

#2. What anime are you embarrassed to admit to liking?

This is a somewhat recent example but Uma Musume: Pretty Derby. Considering that this is about anthropomorphic horse girls racing to perform as idols, raised eyebrows is to be expected. But what can I say? I honestly think that show is good, certainly better than it has every right to be. It has flaws — the cast is too big and there’s only so many ways you can animate running  — but I dig the character designs and the characterization of the two leads.

#3. What anime are you enjoying the most right now?

Geez, I haven’t been watching anime weekly this season. Been binge watching Summer and Fall shows in chunks whenever I have the time. I guess I can still say what I recently enjoyed most.

Astra Lost in Space and Given. The former I really enjoyed for its characters, mysteries, and theme of self-discovery. The latter I wish was faster paced but it was still a very compelling story with terrific direction and BGM; a yaoi series like this is always welcomed.

#4. What, if anything, are you looking forward to right now?

I got a similar question specifically asking about anime in one of the next Q&A tags so I’m going to give a non-anime answer here.

Xenoblade Chronicles: Definitive Edition. Love, love, love the original game on Wii for its gameplay, art direction, story. I fell out of love with the Xenoblade series after Xenoblade Chronicles 2 (I’m super mixed on that game) so I’m hoping that playing the original will remind me of what made me a fan in the first place. Playing it on the Switch will at least be great; handheld is my preferred way to play most games, especially RPGs.

#5. Which anime character do you see yourself the most in?

Rin Shima from Laid-Back Camp. I strongly relate with her preference to enjoy her hobbies alone and how she’s not anti-social but it can takes a lot of convincing to go camping with other people. I’m not a camper (like everyone else in Laid-Back Camp, I lack the funds) and my hobbies are admittedly very easy to do alone but I do share Rin’s attitude. I’m not super into writing collaborations. In high school and college, I was inconsistent with attending anime club because I preferred watching my weeb crap by myself. I prefer single-player games and own very few multiplayer ones, much to my friends’ chagrin. Obviously, I do enjoy the company of others. I hang out with my friends a lot, sometimes every week when we can, and they’re all nerds so I often engage in my hobbies with them. But in general, I do prefer to do things alone. I used to think to myself there was something super wrong with that and watching Laid-Back Camp actually made me more accepting of this part of my personality.

Also…Rin likes dogs and so I do.

#6. What is your favorite Pokemon? Don’t tell me that you dorks don’t like Pokemon!

MewTwo. I just love its design and origin story within the Pokemon mythos. I’m also nostalgic for Pokemon: The First Movie (which admittedly isn’t all that good) and I played as MewTwo a lot in Super Smash Bros. Melee (I don’t care about tier lists).

#7. Do you have a favorite manga? If so, what is it? I’m looking for a new series to read!

At the top of my head, Fruits Basket. The episode reviews I’ve written so far for the 2019 anime adaptation already explain why but to sum it up: it’s a wonderful series with a wonderful protagonist and message. Ty, I know you’re a fan of Fruits Basket so sorry this isn’t a new series for you read. I need to read more manga…

#8. What do you do to overcome writer’s block? Ignore this question if you’re lucky enough to never get it!

I get writer’s block very often and my general strategy is just shift my attention elsewhere. It can be towards another writing project (I almost always juggle between multiple drafts) but it can something else entirely like watching an anime or playing a video game. In the latter case, I ideally make sure I can quickly go back to the project I’m stuck on when the spark does re-ignite. So if I’m watching something, it’s on another computer tab. If it’s a video game, I’m playing on a handheld system (these days, it’s my Switch). I’ve found forcing myself to write something down unproductive and stressful so putting my mind on something else works for me.

#9. What is your favorite, inspirational anime quote? I was sort of asked this myself, but I’d love to hear yours!

From A Place Further than the Universe (Ep. 2): 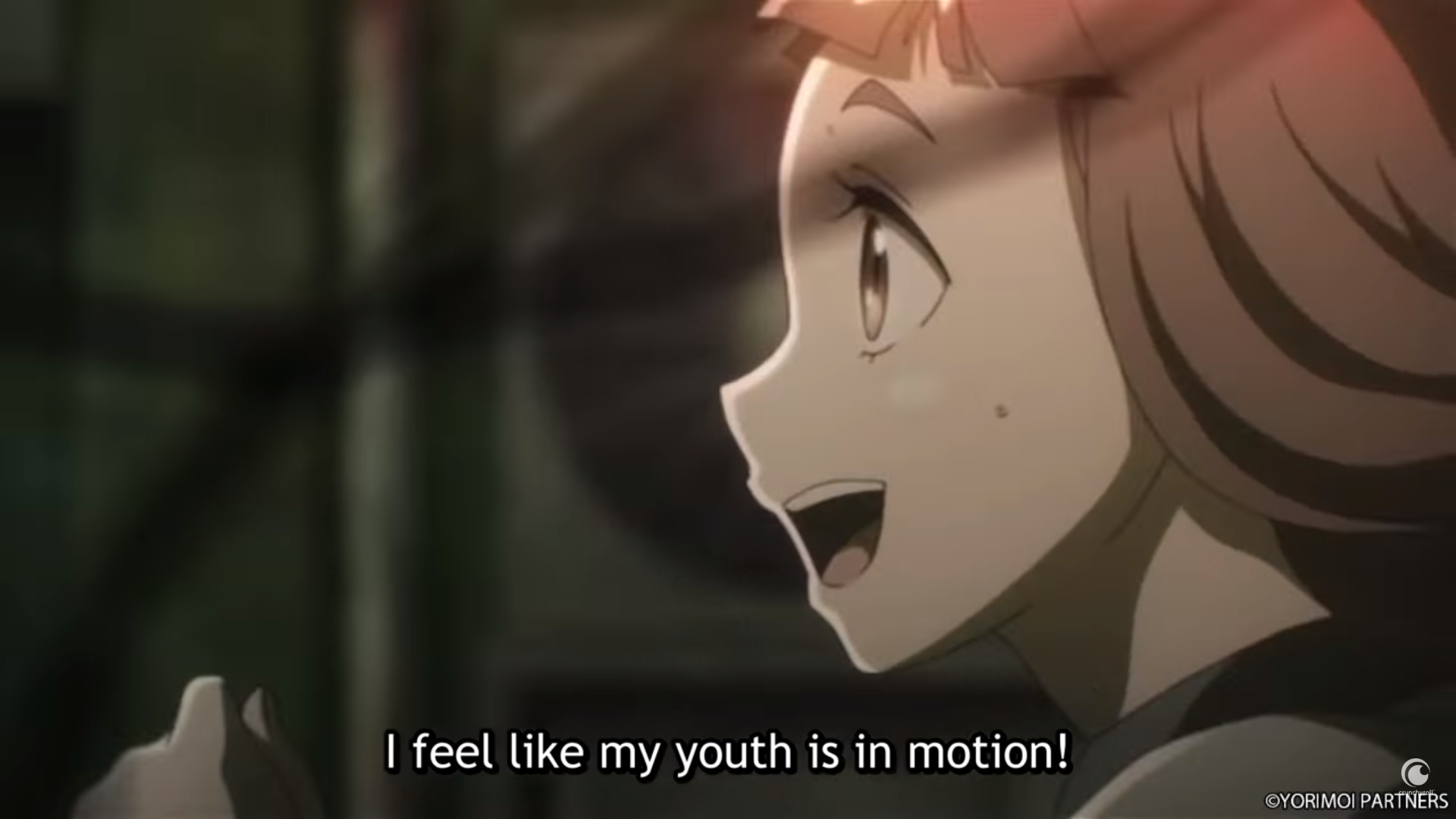 I have a tricky time remembering specific quotes in anime since I’m usually reading subtitles that aren’t 1:1 with the original Japanese script and I rarely watch dubs. However, this quote from Yorimoi has stuck in my head ever since I first saw the respective scene. It might have to do with when I saw it. At the time, I was stressing over my final semester of college and my future so watching Mari look so happy that she’s living in the moment hit me emotionally. Even if the semester sucks (and it did), I wanted to at trudge through and make the most out of it and that moment in Yorimoi (really the whole show) reminded me of that.

#10. What is your favorite blog post (or the one that you’re most proud of)? I’d love to check it out!

5 of My Favorite Drunk Scenes in Anime. I don’t think it’s my best piece of writing but it’s one of my favorite to make; had a ton of fun rewatching the scenes I picked and writing about them. I hope to write editorials like this more often in future.

#11. If you were to ever write about something different (something other than what you usually write about), what would it be?

I’ve always wanted to branch into reviewing other mediums and I dabble into them whenever I can. More specifically, I want to write more content about video games. In fact, I’m planning to review Fire Emblem: Three Houses for the blog (hence why you might’ve seen me tweeting about it on occasion). The obvious problem with branching out is that it requires time. Time I normally should dedicate to blogging about anime. If blogging was my full-time job, branching out would be really easy, but it isn’t so dabbling has been the best I can do.

Other than that, I’ve mentioned this in a past tag but I’ve always wanted to write a book. There’s one premise I’ve particularly been brainstorming on and I want to start writing it out in earnest (so long as it doesn’t conflict with the blog of course).