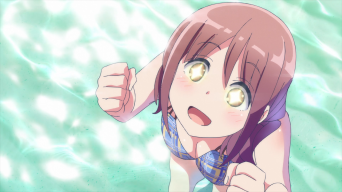 Before I begin, I just wanted to say Thank You to everyone who has been supporting my blog for the past month and a half. With the new Summer 2018 season, I really wanted to blog in earnest again and having that be met with higher views and, more importantly, new followers and visitors has consistently made my day. Whether you’re new here or you’ve been following me for a while, just know that I think you guys are the best and I’ll always appreciate your support. Again, Thank you!

…And sorry if I’m about to disappoint you with my taste in anime.

To be honest, I’ve been finding Summer 2018 to be just a mildly enjoyable season. I doubt I’ve made that clear in my Episode Reviews since I almost always prefer covering anime I’m actually enjoying. But when writing these rankings, I was alarmed to find that there’s only two anime I’d want to score above a 7 out of 10. Granted, we still have half a season to go and I’m admittedly missing out on some big sequels right now (still need to catch up on My Hero Academia…) so maybe things will change. I’d hate to have this lukewarm feeling carrying into Fall 2018.

Oh well, I can’t expect every season to be amazing. Let’s take a look at Summer 2018.

#1. Revue Starlight
Current Score: 9 | Episodes Seen: 5 out of 12
Thoughts: A very easy top pick for me. Yes, Revue Starlight is a weird anime but it also just strikes all the right chords for me. Each of its nine main characters are interesting and they have all been blessed with just the right amount of screentime. The Revues, while requiring some suspension of disbelief, are a true joy to sit through thanks to its imagery, spectacle, soundtrack, and direction. I really can’t think of a thing this anime needs to improve on. At the rate it’s going, it could easily end up as one of my favorite anime of 2018.

#2. Cells at Work!
Current Score: 8 | Episodes Seen: 6 out of 13
Thoughts: Currently the most adorable guilt trip ever created. Cells‘ re-imagining of the hard work human cells do for their host is so bizarre but also educational and hilarious. I was afraid this premise would lose steam but it’s surprisingly held up quite well for six weeks now and I’m confident that it’ll stay that way for the rest of the season. There’s not enough Platelets though.

#3. Banana Fish
Current Score: 7 | Episodes Seen: 6 out of 24
Thoughts: It was a toss between 7 and an 8. For now, I chose to settle on the former. The characterization is solid and some moments stand out on a thematic and/or engaging level. However, the fast pacing is still problematic in how it saps a lot of emotional impact from certain scenes. The updated setting has also been tough to shrug off. With a cour and half left to go though, there’s plenty of room for Banana Fish to improve.

#4. Harukana Receive
Current Score: 7 | Episodes Seen: 6 out of 12
Thoughts: Proof that I am a man of culture. But seriously, Harukana Receive has a been fun ride. Yes, there is a lot of fanservice and I will not pretend that it doesn’t contribute to my enjoyment in some way. On a more legitimate note though, I really have found the anime to be a well-executed story about meaningful partnership in sports and perseverance. The whole main cast has a lot of charm as well, especially Haruka.

#5. Asobi Asobase -workshop of fun-
Current Score: 7 | Episodes Seen: 6 out of 12
Thoughts: A little too inconsistent for my liking. Sometimes, it delivers the funniest bits of comedy I’ve seen in 2018. Other times, it’s just weird to a fault. I also still stand by the opinion that this should’ve been a short series. Even at its worse though, I find Asobi Asobase pretty enjoyable and when it does land a great joke, it makes sitting through the weak sauce worthwhile.

#6. Ani ni Tsukeru Kusuri wa Nai! 2
Current Score: 7 | Episodes Seen: 6 out of 24
Thoughts: More or less the same as the first season which is fine by me. That was all I asked for anyway. Oddly enough, the one character who benefits from there being a second season is the one who was introduced too late in the last one, Banzai. His efforts in acting as dumb and poor as Shi Fen has finally won me over.

#7. Happy Sugar Life
Current Score: 7 | Episodes Seen: 5 out of 12
Thoughts: A surprise favorite. A lot of my enjoyment with Happy Sugar Life owes to Kana Hanazawa; I just really like her voicing Satou. I wish she got to play more sinister roles. In terms of writing though, I do enjoy just how absurdly crazy everyone is in this show and how it eggs the viewer into rooting for a protagonist you normally wouldn’t.

#8. Phantom in the Twilight
Current Score: 6 | Episodes Seen: 6 out of 12
Thoughts: For once, a Chinese co-production I’m willing to sit through! Phantom in the Twilight is hardly anything special but I dig the London setting and the attention to folklore. Having a writer such as Fumiaki Murato has clearly helped.

#9. Hanebado!
Current Score: 6 | Episodes Seen: 7 out of 13
Thoughts: Deep down, I appreciate there being a more dramatic all-girls sports anime but I still find Hanebado! to be extremely overrated. It has plenty of good ideas but the timing in which it executes them has been pretty baffling. That said, the major characters still merit discussion and the animation is really stinking good.

#10. Angolmois: Record of Mongol Invasion
Current Score: 6 | Episodes Seen: 6 out of 12
Thoughts: It’s neat to see a new period piece anime set in Feudal Japan but that’s novelty at best. Solid action and plot but it’s unreasonable to have this many characters and neither Jinzabarou nor Teurhi are strong enough leads to carry the whole thing. Also, the historical inaccuracies and the way the Mongols are portrayed are massive buzzkills for me.

#11. One Room (Season 2)
Current Score: 6 | Episodes Seen: 6 out of 12
Thoughts: Come for the cute girls, stay for the awkward hilarity. It’s One Room. If you’ve made it to Season 2, you know exactly what you’re going in for. But to be fair, I found Yui’s return arc the strongest One Room has ever been and I’m kind of liking one of the new girls, Minori, right now.

#12. Sunaharasou no Kanrinrin-san
Current Score: 6 | Episodes Seen: 6 out of 12
Thoughts: Mileage will definitely vary over this anime’s shota-themed humor, especially since it’s not like Maid Dragon where it was just one facet of comedy. Every once in a while though, there is charm to be found and I’ve actually liked some of the characters, including the recent addition of Nana.

#13. Muhyo & Roji’s Bureau of Supernatural Investigation
Current Score: 6 | Episodes Seen: 2 out of 12
Thoughts: By August, I’ve zoned out of writing first impressions and I didn’t have much to say about this late arrival, hence why I’m only talking about it now. Anyway, this does scream “2000s” in how it’s drawn and written but I kind of find it appealing. The second episode was also more enjoyable than the first so I’m still willing to give this show a tryout for now.

#14. Island
Current Score: 5 | Episodes Seen: 7 out of 12
Thoughts: I kind of wish I dropped Island entirely but I let it pass the halfway point and I’m not about to do take backs just yet. Still, the worldbuilding and pacing is so botched that it actually hurts my brain. It’s really only the purely slice of life moments that have worked.

#15. Angels of Death
Current Score: 5 | Episodes Seen: 6 out of 16
Thoughts: Props to my brother watching this with me. Without him keeping the experience fun, I would’ve dropped this show right when I dropped coverage. While the zaniness is pretty entertaining, the context and details are so murky that I’m not convinced there’s a method behind the madness. At sixteen episodes, the halfway point is technically Episode 8 so if I do want to call it quits, I still have a two week grace period.

Bold = Didn’t Scribbled About It (It Happens Sometimes)

I kept going back and forth in my head about Hanebado! and Happy Sugar Life but in the end, I decided to stick with the Episode Reviews. In addition, I’m also covering Magical Girl Raising Project as Funimation is doing a weakly stream of its English dub. So, I’m actually covering seven anime right now.